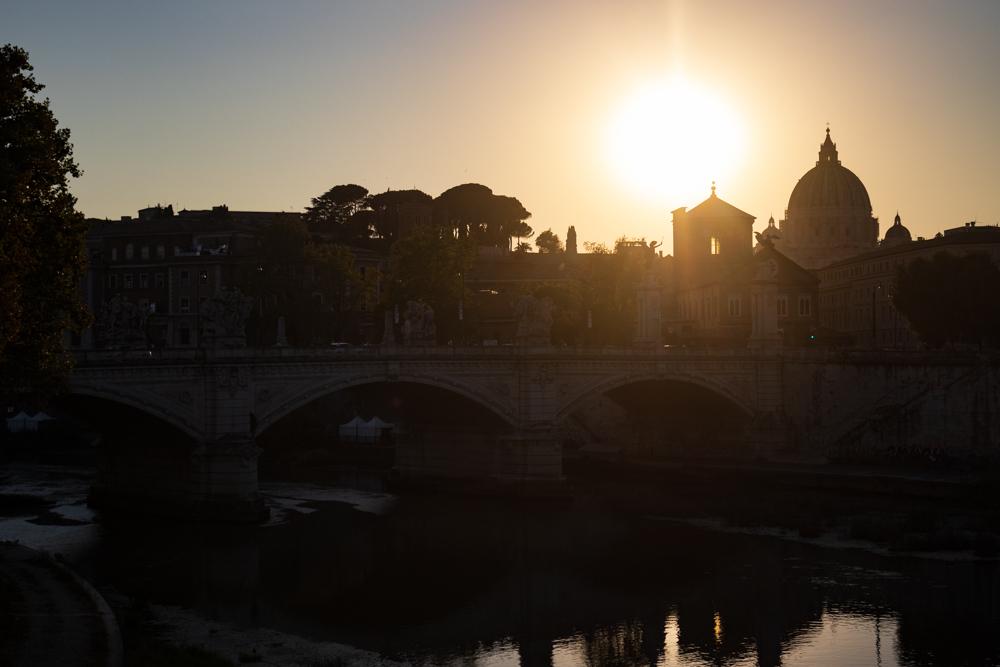 Sundown with the shilouette of the St. Peter's Basilica.

Of course we had to stay some days in Roma and enjoy the city. But on the first day we were still pretty exhausted and also had to take care of our bicycles. After making laundry we wanted to take the bus to the nearest bicycle store to buy some spare parts. But we took the wrong bus, so we checked the bicycle store in the area where the final stop was. However, all shops were closed so we took the bus to the store we initially wanted to go. We got our parts and when we were back Alina replaced her chain and we both cleaned the bicycles. In the evening we had some salad in our apartment and planned our tour in the city for the next day.

So after breakfast we took the bus and metro to the main station of Roma. There we could perform a Covid test and get a green pass for entering attractions and restaurants into the city. The test was free, but it took us more than two hours because a lot of people wanted to get a test. Afterwards, we went to a nearby vegan restaurant for some delicious lunch. Then we walked to the first attraction and visited the Colosseum from the outside. Quite impressive to stand right in front of it (selfie time of course!). Next we walked to the Forum Romanum.

For the Forum Romanum we bought some tickets and took a walk around. The Forum is a massive park with a lot of buildings and ruins from the Antic until the Renaissance. There is a lot of history and so many things to discover, it is just unbelievable. We walked around for hours stopped here and there and read some signs but most of the time we just enjoyed the view on the historic places. Also we had some beautiful views on Roma which we enjoyed from the Palatine hill. A funny sea gull was posing up there for the tourists (all of them taking pictures of it of course).

Relaxing before the big match – AS Roma vs. Sassuolo

When we left the Forum Romanum we needed a place to relax. So we walked pass the Circo Massimo to the “Giardino degli Aranci“. This is an orange tree garden with a beautiful view on Roma with its cathedrals and the river Tevere. Of course, no visit of Roma is complete without visiting Vatican city. So we walked along the river Tevere, stopped for a delicious kosher icecream in the jewish quarter and a pizza for dinner till we came to the famous plaza in front of the “Basilica di San Pietro”. Also to see this was quite impressive (selfie time again).

For the night we checked out the matches of the first Italian football league Serie A. AS Roma was playing at home at the Stadio Olimpico against Sassuolo. So we bought tickets and watched the game. In a close match Roma scored the winning 2:1 goal during additional time and the whole stadium went crazy. Also a very intense experience. Our way back to the camping ground took some time and we were extremely tired after this long day. So of course on our third day we didn’t do much and enjoyed some time at the swimmingpool and tried the restaurant at our camping ground in the evening.

After a relatively short night due to loud neighbours we had breakfast at the cabin and afterwards we made our bicycles ready. We wanted to follow Eurovelo 5 and hoped that there would be signs (haha…). But before this we needed to navigate through the city. Of course, the streets were full of cars and most of the time there were no bicycle lanes. But it was not too bad to cycle on major roads and the drivers let us enough space. After passing the Vatican City we had some more kilometers on major roads till we came to the river Tevere.

Next to the river there was a big bicycle path. So cycling was getting more relax. But unfortunately there were no signs of the Eurovelo 5. So we had to use the navigation again and planned to cycle to a camping ground next to a lake. For some more kilometers we could enjoy the beautiful bicycle path next to the river like a lot of other cyclists. When left the city north wise there were a lot of sports facilities and almost no residential houses. A really beautiful area.

Fighting the ups and downs

But than we had to turn on major streets. The traffic increased and so the cycling was getting more intense. We did not have to climb any mountains but still there was a lot of up and down in this area which was a bit tough due to the heat. When we came to Cesano we made a stop at a café, had a little lunch, and could not resist the sweets they sold.

We were close to our destination, but when we continued our stage Alina didn’t feel so well. The sun was shining hot which didn’t make things easier. After some more ups and downs we finally came to the lake “Lago di Bracciano”. We followed the coastline for a few more kilometers till we came to the camping ground. It was a nice little camping ground and not many visitors where there. We built up everything, took a shower and walked to the lake for some photos. There we had a meeting with some cute ducks curious about us. In the evening we met another German bikepacker and had nice dinner at the restaurant on the camping ground.