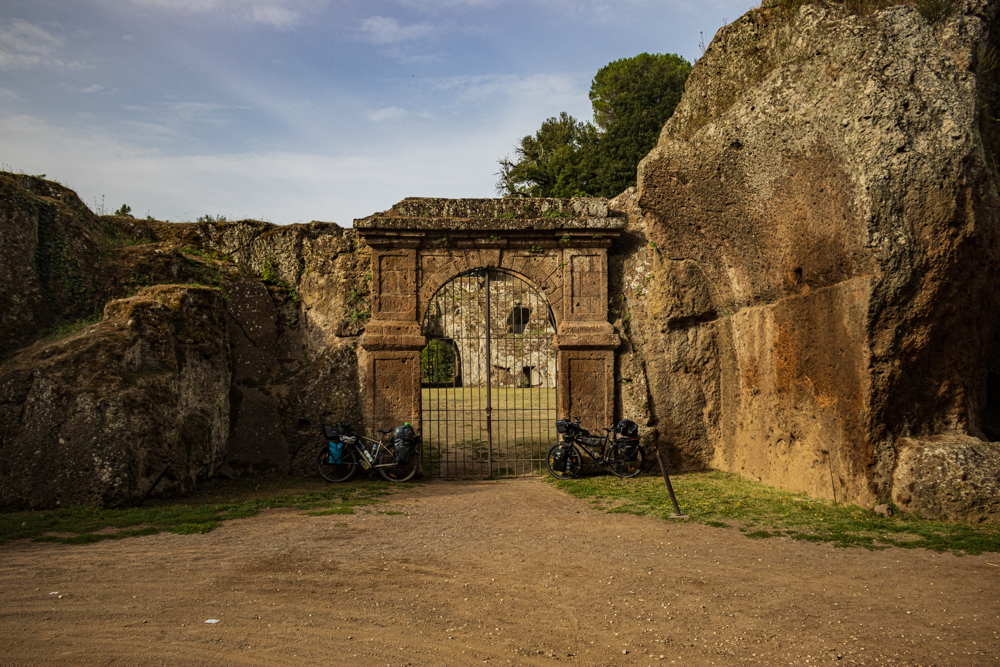 We did not take a restday at lake Bracciano, as we needed to make some kilometers to get further north. Thus, the goal of this stage was to cycle to the lake “Lago di Bolsena” and stay there for two nights. Therefore we used the navigation to get to the camping ground. Also the Eurovelo 5 leads in this direction but there aren’t any street signs for this. So we decided to stand up early again and had breakfast when it was still almost dark. We got everything ready afterwards and said goodbye to our fellow German bikepacker neighbour and started the stage after sunrise and left lake Bracciano.

Tough climbing in the morning with nice views over lake Bracciano

Alina still felt a bit off, and also Alex didn’t feel well the night before and also after breakfast. We thought we maybe drunk or ate something not so good, but wanted to continue our tour. The first kilometers were pretty easy and we even could cycle on a bicycle path for some time. Then we entered the city of Trevignano Romano (the camping ground was outside the city) and had to turn into a minor street. Immediately we had to take a climbing passage with very steep ramps. Of course, we needed every now and then a break. The start of the ramp was very brutal but when we came closer to the top the steepness was moderate.

When we were on top we had nice views on lake Bracciano and we entered a very green area with a lot of forest. And of course a downhill passage followed where we could regain some energy. We stopped in Sutri in a small and nice park called “Parco Naturale Regionale dell’Antichissima Città di Sutri“. We could see some structures from the antic but the park was closed and nobody was there besides some cats. However, we still had a lot to cycle and continued our stage. After a bit more of climbing we came to the city of Capranica. There we stopped and had a coffee and some croissants with chocolate.

Again climbing but then enjoying the next lake

Still in a hilly area with a lot of ups and downs we had to follow a major road for some kilometers. We passed some small towns and turned onto a minor road which led us to the city Viterbo which was the biggest city in this area. We crossed the city and cycled along a big city wall till we turned again on a major streets. Now the toughest part of the tour started. A long climbing passage all the way up to Montefiascone followed. On our way up, we found a little park with two big trees. We decided to use our picnic blanket to chill there under the trees. A pause we really needed.

But the stage had to go on and after some more climbing we made it to the top. Then a fast descent along the lake “Lago di Bolsena” followed. Most of the time trees covered the nice view on the lake but we found some spots here and there to enjoy the view. We cycled through Bolsena and a few kilometers later we arrived at our camping ground. A friendly host greeted us and after we built up everything and took a shower, we had a delicious dinner at the restaurant of the camping ground. After two beers we went to bed quite tired.