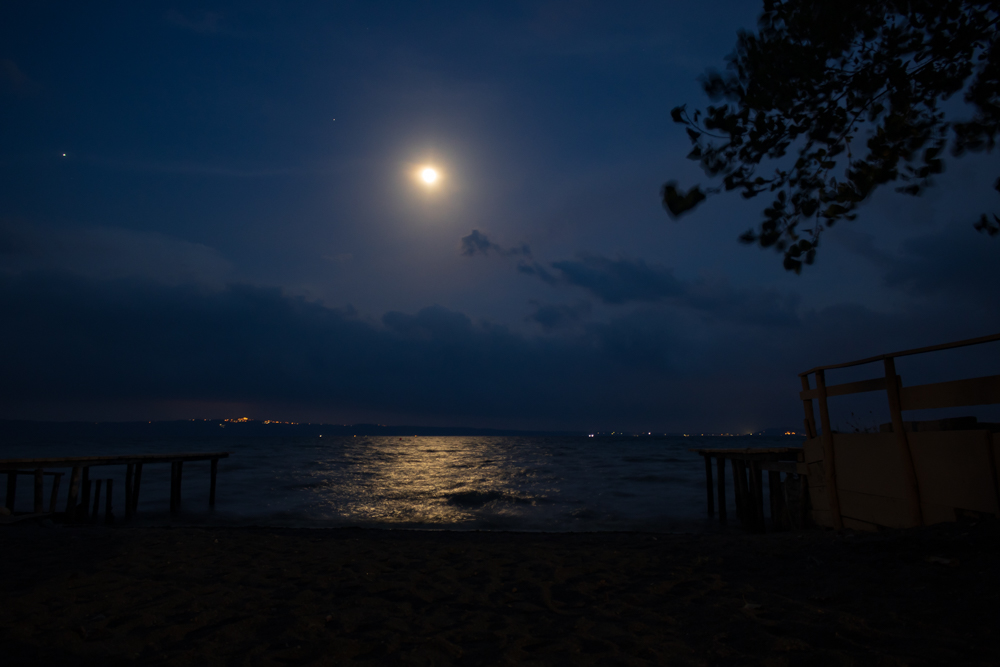 On our rest day at the camping ground at lake Bolsena we had late breakfast and after this we had to do some daily business like laundry. Afterwards we bought some food for dinner at the market on the camping ground and spent a lot of time at the restaurant doing stuff at our notebooks. You also could enjoy the view over the wide lake Bolsena. When we made dinner, strong winds started to blow, but behind the tent we could cook and eat protected. The wind got stronger and stronger during the evening and night. We checked the tarp a few times but it seemed to resist the storm. But within the tent we could her the crazy noise of the storm, so we did not sleep that well. You could also here the rough water from lake Bolsena next to our tent.

Stormy morning at lake Bolsena, climbing, and the Via Francigene

However, the night ended and we started with breakfast later than usually. The tent was partly covered in sand and dirt from the ground, but everything was still in place. When we dismantled the tent and tarp we had to be careful that nothing flew away. But everything went fine and we could start the stage. It felt like a tradition that after three kilometers on minor streets a tough and steep climbing passage started. We needed some breaks, but still our heartbeat rate was at the limit when we reached the top in the center of San Lorenzo Nuovo. Some nice views back over lake Bolsena were the reward for the effort.

After a break we continued the stage. We were cycling for one hour and didn’t even came five kilometer far due to the tough climbing. We still followed roughly the Eurovelo 5 which itself uses sometimes the path of the Via Francigene. This is a pilgrims path from Canterbury to Rome. And during our next kilometers we saw a lot of pilgrims and wanderer often with big rucksacks. Unfortunately, often they had to walk on normal streets without shoulder or sidewalk, so cycling was the better options in this area.

Seeking shelter from the storm in Radicofani

The next kilometers were mostly downhill or flat. We had some really nice views at the surrounding mountain range. Meanwhile we left the region of Lazio and entered the famous Toscana. When we cycled further we recognized that we were cycling in the direction of a mountain range and knew what was waiting for us. Within around five km we had to climb 400 meters of altitude. Of course this took a lot of time and we needed many breaks. The sun was shining hot most of the time but when we came closer to the top we heared thunder and it started to rain. On the top of this passage was the village Radicofani, so we cycled there to seek shelter.

We took the first chance at a clothing store and stopped under an awning. When the rain got less we wanted to cycle a bit further in the village to stop at a restaurant. It took us some time but we finally found an open restaurant where we were protected from the rain. Also a bikepacker from Israel stopped there and he was impressed by our equipment. We had a friendly chat and he told us that he was inspired by Roei Sadan to start his trip from Milano to Roma. But after the delicious lunch it was time to say goodbye and continue our stage.

Enjoying the hills of tuscany

The rain stopped and the sun was shining again when we left Radicofani on a minor road with a very long downhill segment. Again we had stunning views on the surrounding area. We saw a lot of the typical Toscanini houses surrounded by “Mediterranean cypresses” in this hilly area. Around every corner we could take a photo of a postcard motive. After some more kilometers we made a little break and discussed the options for the night. We wanted to do another stage on the next day, so we booked an apartment near Siena. But it was still some kilometers to cycle.

The gallery was not found!

On our way to San Quirico d’Orcia we had to climb a really steep ramp before we could turn back onto a major street. But only to left the street again after a few kilometers to enjoy a downhill segment and of course to fight up our last climbing passage. Although it was a tough stage we still could enjoy the beauty of the Toscana. The last 20 kilometers we followed a major street. There was more traffic than we had before but most of the path was flat so we got through pretty fast and arrived at our apartment shortly after sundown. We hurried up to get some supplies from the local market before closing time. After a shower and dinner we did some stuff on our notebooks and planned the next stages.

The gallery was not found!