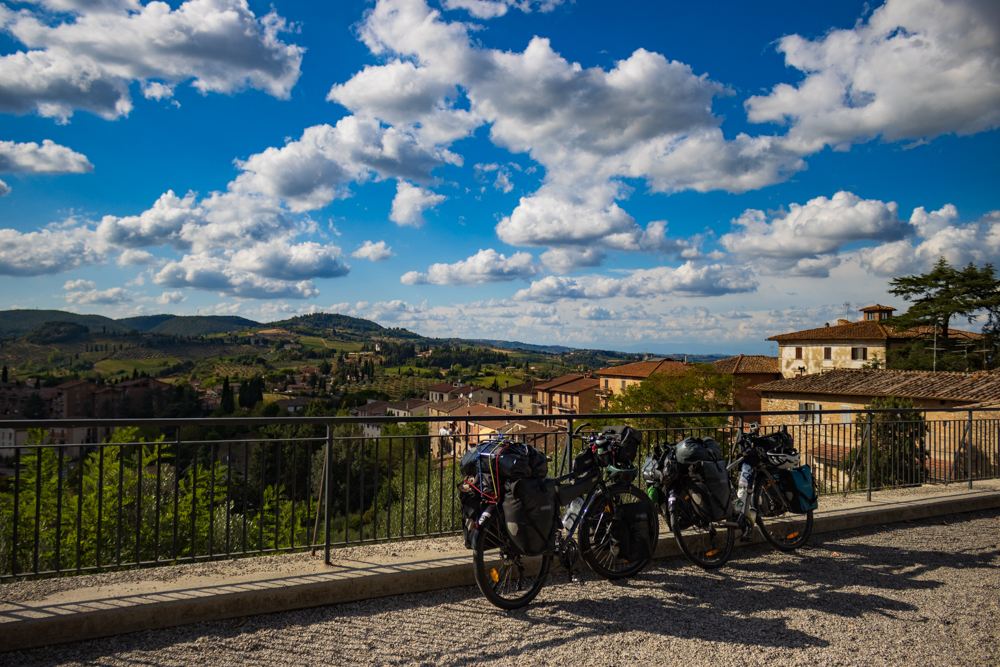 Bikes with the view over the area from San Gimignano.

After breakfast at our nice apartment at Ponte a Tressa we packed our bags and got the bicycles ready. We were still a bit tired from the stage before, but we wanted to get further north. We followed our navigation first on a major road and after a while we could turn into a smaller road. On the way, we also had some bicycle paths, but they disappeared when we came closer to Siena. On our way into the city we had some climbing to do. It was hard work but we had also some wonderful views over the Tuscany.

Enjoying Siena on the way

When we entered Siena our navigation led us into the center of the city, where all the businesses and tourists were. First, it was okay and we could stop here and there for some photos, but then the streets got so crowded that we had to push the bicycles. When we left the most crowded streets behind we found a pleasant spot with shadow, where we could eat some snacks and enjoyed an outstanding view. When we left Siena we turned onto minor roads again and a nice downhill passage begun.

Supermarket lunch in a park after Siena

The streets were in good condition and we made some progress. When we came to Belvedere we saw a Decathlon store and thought we could buy a new camping gas bin because our big one was empty. We bought two and recognized after buying that it doesn’t fit with our equipment. Good for us that returning was no problem. Some kilometers later we bought some food at at supermarket and had lunch at a nearby park in Colle di Val d’Elsa. There we could also refill our bottles for free. Furthermore, we checked our options for the night. There weren’t much camping grounds around us, so we booked an Agriturismo around 50 km away.

After this a short up and down segment followed before we came closer to San Gimignano. Before entering the city we had to climb a very steep and long segment. It was really hard and also the sun was shining bright, so the heat increased. After many breaks and a lot of sweat we made it into the city. Also here a lot of tourists walked around, but this time we avoided the city center. Again we found a place with a nice view and not that much people where we had some snacks. It was probably at this point as we read the message of our host that check-in would only be possible until 7 pm. Thus, adding a little bit more pressure on us to be fast…

After a very short downhill, again a long and hard climbing passage started. We were really tired but at least the street was in good condition. The area around us was really beautiful but at this moments it was just hard work and we could not fully enjoy it. Also from time to time there was some traffic so we had to stay focused on the street. The climbing was interrupted by two downhill segments. However, finally after a lot of snacks and water we made it to the top and were fully exhausted.

Enjoying a scenic route through Tuscany

There were still more than 20 kilometers to go but now a very long downhill started. It was a pleasant variety that we didn’t need any energy for the next kilometers. The area around us was so beautiful, that we wanted to stop every few meters to enjoy the landscape and take some photos. A truly scenic route. But when we were close to the accommodation we recognized that our goal was on a hill. There were two routes leading there. One was a narrow gravel road into the woods and the other was asphalted. We chose the asphalted one which also meant some more kilometers.

When we left the main road the most brutal meters of climbing started. We looked on the clock and had only 20 minutes left until 7 pm… The street looked like brand new which was the only plus point. The steepness was mostly over 10% so we really had to fight hard to get to the top. But finally we did it and crossed the little village Montefoscoli. A few kilometers later and of course after one last climbing we arrived at the Agriturismo. It was a beautiful house in a remote area. But of course on this day we could not enjoy much. We just ate, took a shower, and fell into bed totally exhausted.