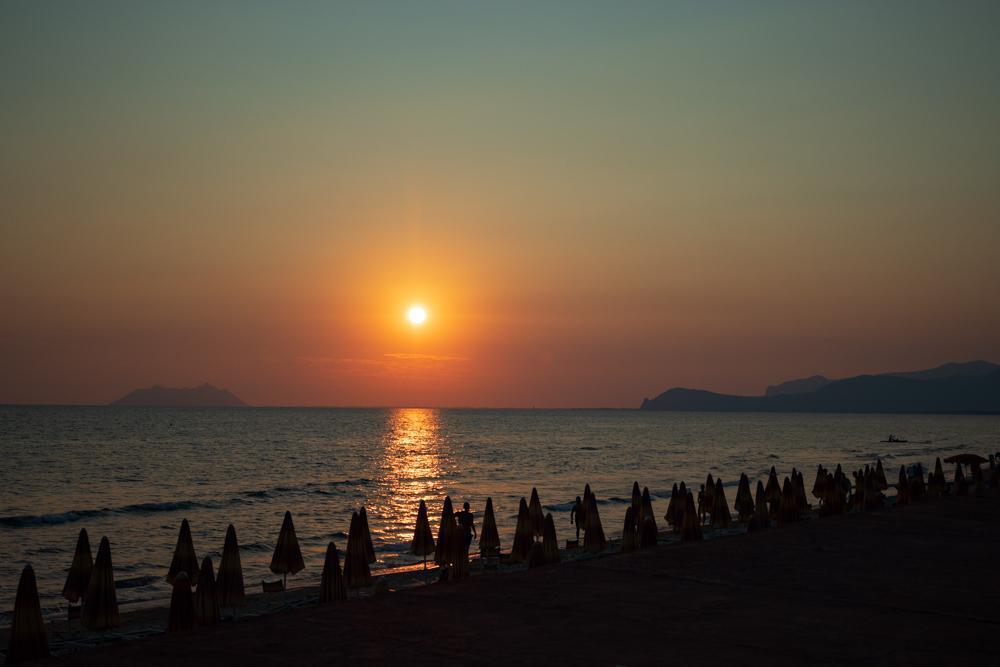 Sundown over the beach of Sperlonga.

On our rest day in Sperlonga we started with a late breakfast at the wonderful camping ground. There were not many parcels so it was quiet and in a remote area. After the breakfast we went to the beach and enjoyed the sun and the sea till late afternoon. Back at the camping ground we did some stuff at the notebooks and in the evening we walked into the center of Sperlonga. There we took some photos and enjoyed the view from some certain spots. Before we went back we bought some supplies at the supermarket. After dinner we went to bed because we already booked at cabin at a camping ground in Roma which was more than 100km far away from Sperlonga.

For this stage we stood up again pretty early. It was still dark and we ate breakfast under our camping light (until it was out of power). Afterwards, we got everything ready and left the camping ground and Sperlonga when almost everybody was still sleeping (despite the cats running already around). We followed a minor street west wise where a fire was burning the day before. The area was still shrouded in smoke a bit. We followed the coastline to Terracina where we made our first short stop.

After Terracina we followed the main road SS7 for around 50 kilometers. It was a straight road which was quite busy. Some motorbikes, trucks and cars passed us very close which reminded us on our experience in Bosnia and Herzegovina. The road was in pretty good condition but there was not much too see. Once in a while it was hard to cylce close to the right side due to the asphalt being damaged by tree roots. We could see long mountain ranges with many Italian Borghis along the street. Interesting about the SS7 is that most of the part it is still the same road us the antic Via Appia which was started to build in 312 BC from Roma and was expanded over the centuries to Brindisi.

The return of the flat tires

When we came to Cisterna di Latina we could turn onto minor roads with less traffic. Also here we made a short stop for snacks. A few kilometers outside the city Alina recognized that the front tire lost air. So we needed to stop and Alina fixed the tire. Just some minutes later she recognized at the same tire that it lost air again. Good for us that we could make it into the city of Aprillia, where we stopped at a gas station. It was also lunch time, so Alina repaired her tire again and Alex went to a nearby restaurant and bought some lunch. We ate (a little bit too much stuff) next to our bicycles while we also fixed the tire.

When we continued our stage we had a small climbing passage but it wasn’t too tough. In general, the whole stage was really flat. The next kilometers we cycled through a remote area. In the distance you could see the suburbs of Roma. We were just around 20 kilometers far from the city border but it felt a bit like countryside. But the closer we came to Roma the more trash was lying next to the street. Also we saw some burned places in this areas and prostitution at some roundabouts. Sometimes we got the feeling we were in an Apocalyptic movie, were humans vanished and what they left behind was trash.

Finally, we entered Roma on a main road. Of course in such a big city was a lot of traffic going on and it was a bit chaotic but most streets were big enough and we had enough space. When we came to a supermarket we bought some water and a little snack. Some kilometers later we turned on a bicycle path which we didn’t expect. This path followed the river Tevere for some kilometers. Then we had to turn onto a main street and fight for the next kilometers through the traffic jungle of Roma.

The last kilometers were pretty intense. We cycled for so long and were really tired, but we had to stay focused so we would survive the traffic. Without any incidents we got close to the camping ground when we heard a helicopter very close. When we passed a fire station we saw the helicopter filled its helicopter bucket with water. It just flew for some minutes and we could see how it released the water. Some minutes after we came to a place where we had a good view on the burned area which was a just bushes and grass without any houses. The firefighters operation was still ongoing. We could not see any fire but some smoke. We were surprised to see something like that practically in the middle of Rome.

Just a few hundred meters away from this area we made our checked-in at the camping ground. It was a strange feeling when you know that there was a fire nearby. However, we also were very tired and just happy about our cabin. After a shower and some chill time, we went to the supermarket around the corner to get us some dinner. It didn’t take long after dinner till we fell asleep.