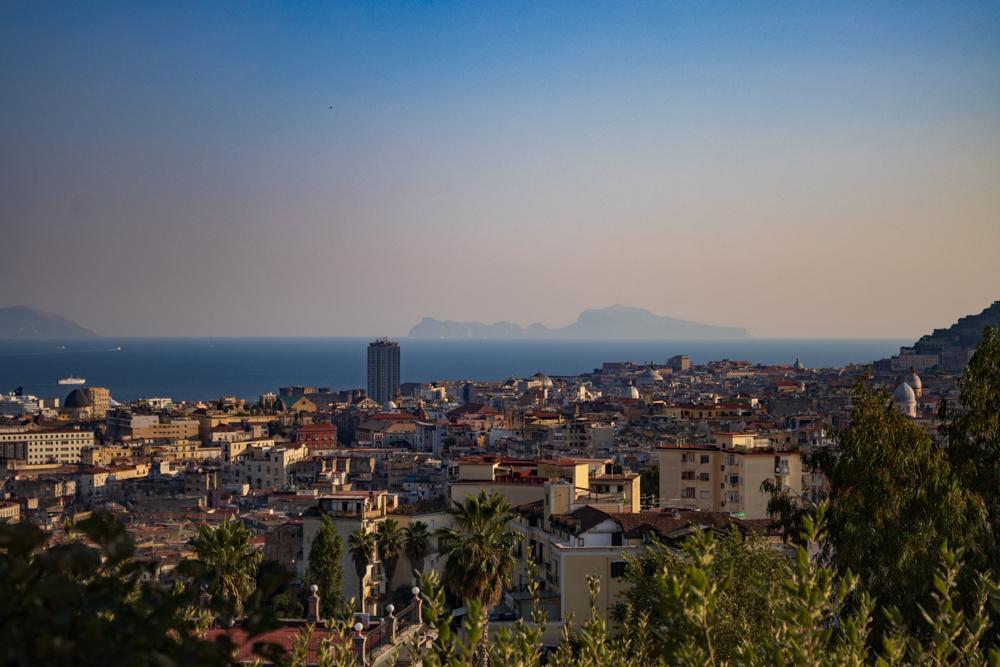 After the tough stages through the mountains of south Italy we needed two rest days in Napoli. We booked an inexpensive small apartment near the center of the city. The disadvantage was that during the night it was pretty loud because of the traffic at night and all the honking. However, after the breakfast our way into the city was not long. We didn’t have a plan to visit certain sights and just wanted to walk around the city. Our first stop was a huge historical and beautiful Cattedrale di Santa Maria Assunta.

Chaotic, crowded and just too much for us – exploring Napoli

When we continued our tour we walked through a small alley where the buildings were built so close that no sunlight touched the street. A lot of tourists were walking around, all business were open and you could eat and buy things everywhere. On many walls you could see a lot of street art and of course we made some photos. After a little snack in one of the countless bakeries we walked along the famous Spaccanapoli street till we came to the big Porta Nolana.

We had a short visit in an church under construction nearby. However, we were thrown out of the church unfriendly by the staff. We were tired by all the impressions so we decided to go to a bar and have some drinks before we went back to the apartment. In the evening we got us some pizza (from a pizzeria two doors next to us) and enjoyed a show at our laptop.

A little paradise in Napoli

The next day we slept long and had to do a lot of things on our notebooks. We were a bit stressed from the city so we just walked to the “Real Bosco di Capodimonte” and enjoyed to walk around in a quiet and peaceful environment. You could describe Napoli with the words crowded, loud and hectic or prosperous, lively and exiting. Both description are right but different point of views. No matter if you like it or not the city has a lot of historical and impressive buildings and a lot of other things to offer.

However, finally came the morning when we packed our things and started our 60th stage, exactly 5 month after we started from Skanör in Sweden. Our plan was to follow the Eurovelo 7 route therefore we had a gpx file on our navigation because in this area were no signs for the route. We made our way through the narrow streets of Napoli to get to the harbor where the Eurovelo route should be. When we finally followed the route, it often led us in one-way roads or into streets which didn’t exist. So we decided to turn on a major road and leave Napoli that way.

The suburban areas of Napoli

Quite stressed we left Napoli on a minor street which led along the coastline. We took the first chance for a little rest and enjoyed the view at the sea. Afterwards we cycled through some smaller towns with a bit of climbing till we came to a seemingly endless straight road. A lot of abandon buildings were along the streets. Often they had been hotels once, some had been stores and some of them just normal houses. However, still a few people were living there but it looked like a really poor area and of course a lot of trash was lying around. But the street was in good condition and everything was flat because we were following the coastline. So we made good progress.

Coffee break with the stray dogs in Castel Volturno

When we came to Castel Volturno we made a short break at a café and drunk some coffee. We were joined by some cute stray dogs running around the area. Our gpx file made a lot of trouble and it was difficult to follow (probably again because of just changing the original direction). So we used the normal navigation and chose a camping ground close to the sea as destination. We crossed some bridges under construction without any cars. But some kilometers later we had to turn onto a major street and the traffic increased. A lot of trucks were driving on this road but most of the time the street was big enough and we didn’t have too much trouble with traffic.

Also on this street we cycled a lot of kilometers. When we finally found an open pizzeria we took the chance for late lunch. We passed a lot of towns and most of the time we had some nice views on the mountain ranges from the inland. And still everything was flat so we were pretty fast. When we came to Minturno we could turn onto a minor street with less traffic. We passed the impressive remains of an aqueduct. By now the area seemed to be more lively than before. At a supermarket we made another stop and refilled our bottles for the final part.

Spooky tunnels, covid self-Test, and a cozy campsite in Sperlonga

During the last kilometers there were some little climbing passages but nothing too tough. We also came along some areas where we could clearly see the results of the wildfires. When we came back to the coast we had to cycle through some tunnels which was a bit spooky, but then we came to the camping ground. There were new regulation in Italy against the Covid pandemic so the stuff asked us about the green pass. We didn’t have it but we still had some self Covid test (we bought in Czech Republic a lot of kilometers ago 😂) which we performed in front of him. The result was negative and we could stay at the camping ground. We built up everything, took a shower, had some beer at the bar, and after a little dinner we went to bed quite tired.