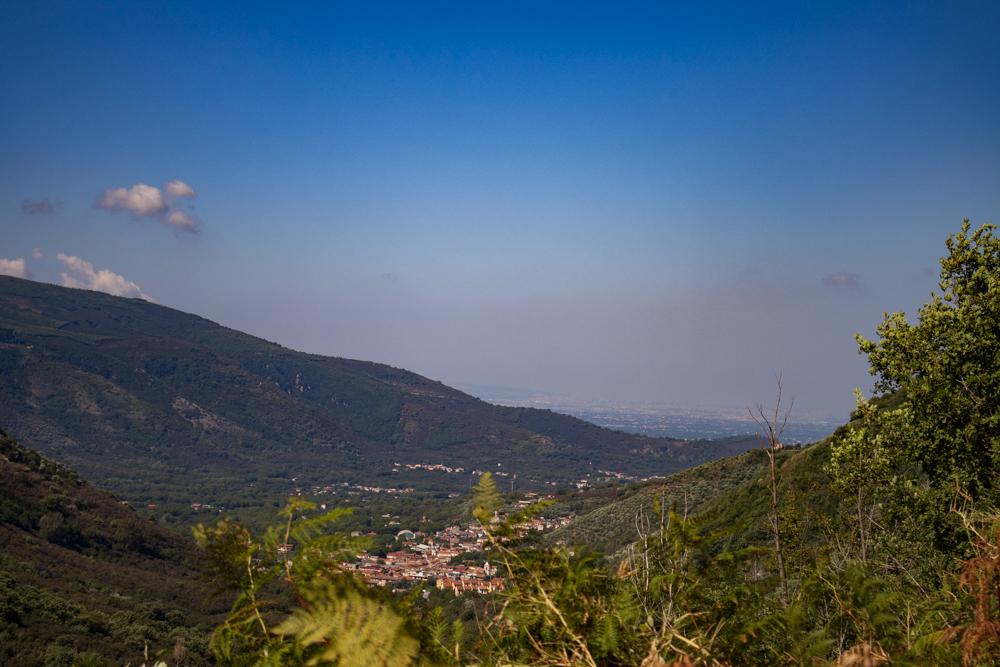 You already can see Napoli and the smog above the city.

We thought that Napoli isn’t that far from Avellino, so we decided to start a bit later and stood up around seven. It was a Saturday night and our apartment was close to the center. Because of the heat we slept with open window and could hear the nightlife of the city from time to time. The highlight of the night was what sounded like a group of women who fell down the stairs in the house (there were also some more apartments with locals in the house). And under the laughing of some of them one woman puked somewhere in front of the house. So probably the nightlife of Avellino is wild. However, somewhen the night ended and we could enjoy our well prepared breakfast at the apartment.

Afterwards we got everything ready and started our stage. First we cycled again through the old town of Avellino which is really beautiful with a church, fountain and an old fashioned big cobblestone road without any cars. After some photo stops we left the city on a minor road. Not much traffic was going on but the sun was already shining strong, nevertheless the conditions were still good for cycling.

Shortly after Avellino a long climbing segment started. But the street was still good and it wasn’t too steep. There was a sign that the road was closed due to a landslide but we had not much other options, so we tried the direction anyway. On our way up we had beautiful views on the mountains at the “Parco Regionale Monti Picentini”. Of course we made a break from time to time to recover and to take photos. On this street a lot of other Italian cyclists enjoyed a ride in this beautiful area during a nice sunny day. And almost all of them were greeting us friendly and some of them were even cheering us. We really felt the Italian joie de vivre and friendliness. When we came to the landslide location, half of the road was closed, but it was no problem to pass by.

It took us some time but finally we came to the top of our climbing passage. After this a really long downhill segment with about 20 kilometers followed. In this area there was mostly dense forest so there were just few spots where we could see the city of Napoli on the horizon. Of course we made some stops and try to get a good picture. When we came to the small village Moschiano we took the chance for a short break on a bench.

After this we entered the suburbia of Napoli. The distance between the towns was getting fewer and fewer till we didn’t realize when we entered a new town. Sometimes we saw poor straydogs running around confused our just sleeping on the side of the road like waiting for their death. Also the traffic increased till we were surrounded by cars and everything in this traffic seems to be chaotic. But in this chaos of cars there seem to be some rules that only the Italians knew. However, our track often wanted us to turn in one way roads from the wrong direction (probably because we just jused it in the other direction than the original one). This was just annoying and also dangerous so we left the track and used navigation to go to our apartment.

Entering the chaotic city of Napoli

Our navigation led us to some streets where not so much traffic was going on. We came close to the famous volcano Vesuvio and had a few views on it. Meanwhile, it was also getting really hot so we needed to take a break from time to time. A few kilometers later we entered the city of Napoli through an industrial area. We were on big streets with a lot of traffic but it was still okay to cycle. However, we immediately recognized the huge amount of trash which could be seen next to the street. It was quite shocking.

We made our way more into the center of the city. And there the real traffic chaos started. Traffic lights seem not to apply to every road user and the concept of lanes didn´t exist anymore. In addition, honking is the ultimate way to communicate and express every feeling which an Italian driver lives through. But we didn’t understand these extraordinary Morse-like code and of course we could not take part in it. Somehow we got through this chaos and came to our apartment quite stressed. Our host was already waiting for us and explained everything. After a shower we needed some time to recover from the stress. In the evening we went to the next supermarket to get us something for dinner. But already this short way showed us how stressfull it would also be as a pedestrian in this city… After eating and some shows we went to bed still hearing the sounds of traffic all night long.