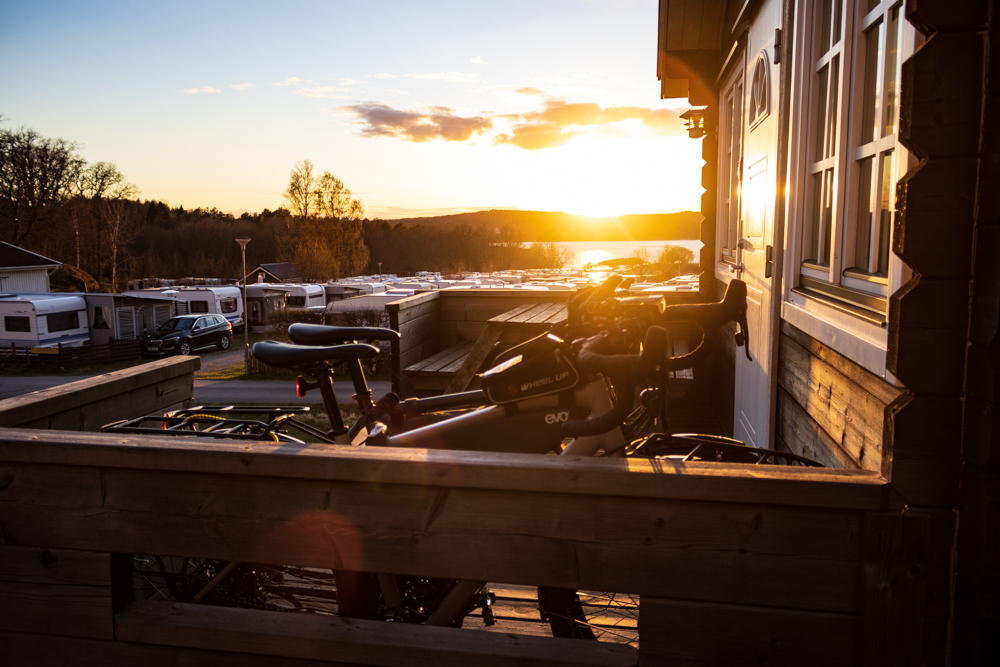 Nice view from our wooden cabin on the campsite in Fossen.

Like all the nights in the tent so far, also this night was quite cold. But after the gear shopping in Göteborg and some research we got a little bit better prepared. For example we stayed in the tent until the sun was already shining and the temperature started to rise. So we had a nice breakfast in the sun, could prepare the bikes without getting cold and had all in all a relaxed start. When we left the campsite it was almost noon. This stage would be all about the islands Tjörn and Orust combined with some nice ferry rides.

On the way to Orust – Bikepackers among themselves

To get from the island Tjörn to Orust one can just follow the main road Länsväg 160. This road also crosses the island Orust und would easily lead us further north. The first kilometers had their ups and downs and the road was also quite busy. The good thing is that the Swedes really respect cyclists and let enough space without doing any crazy maneuvers.

After a while a motor biker passed us and stopped in the next lay-by. He waved at us when we came closer. The first thought in our mind was, that he was angry about us because we did something wrong. But the opposite was the case. The biker named Erik (probably with k instead of c?) was also a passionated bicycle traveller and a local. He was curious about us and our journey. So we had a friendly chat. He did some inspiring travels like the more than 3000 km to the North Cape (in 21 days!). Also he recommended us not to take our planned route. Instead he advised us to follow the coastline along the island Orust and take the ferry from there to our destination. So we were glad about this good advice and continued our tour on much quieter roads.

Not long after our meeting with Erik we stopped in Varkil at a supermarket to have a little lunch. As there are not many towns in this area you have to take such chances. After this we had a little climbing until we reached a beautiful forest. We had to cycle on quite big roads but there was by far not so much traffic as on the Länsväg 160. Our route brought us further along a really lonely area where farms and forest alternated.

When we arrived at Nösund the route was closer to the sea again. For a while we could enjoy nice beach views around every corner. When we left the coastline the street got tougher and the landscape more rough. There were a lot of climbing segments and again the icy heavy Swedish wind started to blow from the front. After some time and a heavy fight against the wind we came to our first ferry from Fröjdendal to Malö. It was already almost 16 o´clock and the temperature was stated with 8°C on the information board. A map right in front of the ferry port informed us about a pilgrim path in this area. But we had no time to walk the 100km – so sad!

A hard fight till the end

After the ferry our path didn’t get any easier. There were a lot of ups and downs through a rocky but stunning landscape. Although there was a lot to see we didn’t pause too long, because we got really tired and already just thought about a warm bed. In Ängo brygga we had to take the next ferry. Bad luck for us, we missed the ferry by a few minutes and had to wait for half an hour in the cold wind.

As it was getting late (already 17 o´clock) we checked our options and decided to cycle to the closest camping ground after the ferry (still 8 km!). These last few kilometers were almost torture but than we finally arrived at the Fossen camping ground. It was getting really cold yet, so we took our chance and booked a wooden cabin. Also no other people where crazy to sleep in a tent out there. Instead we had a “sea of caravans” in front of our nice place for the night. After dinner Alex felt a bit off and Alina still hat a sore throat from the last cold night, so it was the right decision to sleep in our almost warm cabin (heating with an ancient electronic heating device 🔥).