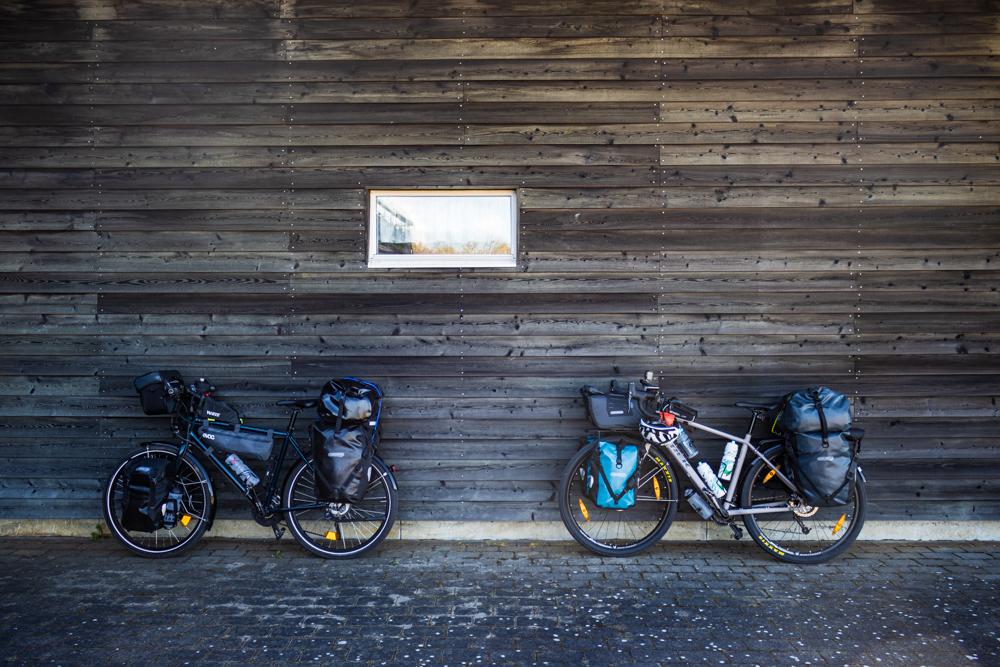 The bikes waiting at the Lunna Golf and Country club in Ingetorp.

After our last warm night in Göteborg we started the day with breakfast in our flat. Then we cleaned the mandatory stuff of the apartment and prepared the bikes. We had our bicycles in front of our door at the second floor. There was no elevator. Therefore, we had to carry the bikes down, followed by a lot of up- and downstairs to get the bags in front of the house. So it took us a while till our bicycles were ready. When we started our stage the sun was shining, but like the days before a strong cold wind was blowing. The plan was to get to the islands north of Göteborg. We wanted to check out a campsite on the island Tjörn.

To get out of the city you first have to cycle partly through it. And probably you can understand, cycling in the suburban area of Göteborg was not so fun. The streets were very busy and full of trucks. Also we had to pass some industrial areas without any cycling lanes. We were reliefed when we left that area behind. Now from time to time we could follow some bike paths.

Kungälv and a break with bird company in the park

After the Kattegattleden ended in Göteborg we were now a little lost. We got so used to just follow the signs and missed them a bit. Thus, we searched for alternative long distance cycling paths and found that the EuroVelo 12 should lead us further north. It would pass Stenungsund, where we could then turn to the west on the island Tjörn. So we chose a city it should cross and hoped to find any signs for the EuroVelo there. However, we did not. Maybe it was because it is still described as “under development” or we just missed it.

So we followed some cycling paths to the next city we saw on the map and in general just cycled in the northern direction. After a long ride through a nice forest we came to the city Kungälv. Before entering the city we passed a big fort. Of course time for a photo stop. In the city we took a rest at a tiny park near a small river. A lot of birds were very interested in our food and sat down in front of our table. Of course the curious duck had success with Alina and got some pieces of the oat cookies. The jackdaws were happy with some bites of apple.

Short visit at the Golf and Country club in Ingetorp

After leaving Kungälv we followed a minor street further north. We were inland and in this area was not so much to see. Also again the headwind got stronger. We saw only tiny villages and once in a while some houses. In contrast to our tours along the coast there were not much options with restroom facilities. So we checked on our (very helpful🤩) app “where is public toilet” to find the nearest one. It turned out to be in the Lunna Golf and Country club in Ingetorp. Thus, we had a nice stop there. Nobody cared about some cyclists sitting in the sun next to the driving range.

Welcome to the island Tjörn

After our short golf adventure we passed again small villages. Shortly behind Stora Höga our route came closer to the coastline. And finally we had again this stunning views at the sea. Oh, how we had missed them! We could also already see the impressive Tjörnbron (Tjörn = Name of the island, bron = bridge). We had to cycle three bridges in total. Heavy winds made the climbing really tough, but the beautiful views were rewarding. After a fast descend we arrived at our camping ground in Myggenäs. We could build up our tent close to the water. Afterwards we had a shower and a warm dinner from our stove. We went to bed early because we knew that this night would be very cold (again).