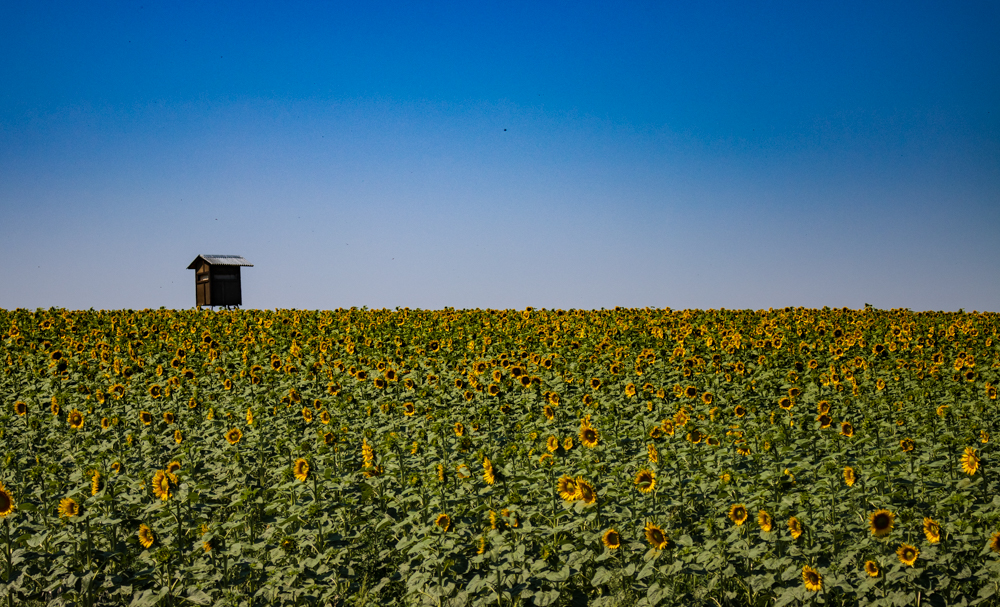 At night before the stage a thunderstorm occurred. We woke up from heavy rain and bright lightnings. But after some time it ended and we could sleep a bit more. After standing up in the morning everything was wet. So we started with breakfast in the kitchen of the creepy hostel. The sun was shining when we started to pack our things, so we put the tent into the sun to get it dry. It didn’t took long and we got everything ready and were good to go. Valtice was just a few kilometers away from the border of Austria, but the Eurovelo 9 took a more than 20 km loop on the Czech side before crossing the border. We decided to cycle the loop.

First we passed a large field of sunflowers. They were not fully grown but you could see a lot of these typical sunflower blossoms. Afterwards our route led us into a forest. The sun was shining bright so it was hot again, but in the forest it was cool and pleasant to cycle. There we came across some interesting buildings like a house in form of an arc called “Dianin chrám (Rendez-vous)” and also a nicely decorated chapel. A lot of Czech people also enjoyed the beautiful weather on their bicycles. Most of the time we had really good bike paths in the Czech Republic, but when we came closer to the border the roads were in bad conditions. However, after some time a small sign at a main street welcomed us to Austria.

In Austria the bicycle roads were again in perfect condition. And also a lot of signs showed us the way of the Eurovelo 9. On our first kilometers we crossed a lot of farm land. We could see golden grain for miles. Some farmers were busy and harvesting on the fields. Bad for us was, that there were almost no trees and the sun was burning really hot. Surprisingly, we came across some piston pumps and learned that in this area Austria pumped oil out of the earth since the 50’s. Later we arrived in the first bigger town called Altlichtenwarth where we took the chance and ate lunch at a restaurant. After some fries with breaded mushrooms and cool refreshing drinks we continued our tour.

The heat battle in Austria begins

Still we were in farmland area and there was almost no shadow for us. The sun shined relentlessly and it was beyond 35 degrees Celsius. The heat hit us hard so we made a lot of rest stops during this time. The good thing was that on our route a lot of resting places were located and you could find some shadow there. Also interesting was that this area was very windy. This was the reason why you could see so many wind mills in this area. When we came to Wilfersdorf we took a rest at a local pub. We drunk a few cool refreshment drinks again and had a friendly chat with some locals about Austria, Corona and cycling. Before we left, the staff was so nice to refill our bottles and to even add some ice cubes.

When we got our filled bottles they were very cold due to the ice cubes. It took just some minutes and the bottles were warm again, and the water in it was almost ready to make some tea. We followed the little river Zaya for a few kilometers till we again entered an area with a lot of farmland. Also a lot of smaller and bigger villages were located there. Somewhen we made a rest at a bus stop in the small village Herrnleis. Meanwhile the sky was cloudy and looking like a thunderstorm could approach every minute. We wanted to evaluate the next kilometers of the road and check our possibilities for the night. On our phones we also got a weather warning for the night, so we decided to book a hotel in Wien. It was quite late and our goal was more than 40 kilometers away. The only good point was that it wasn’t that hot, but maybe still around 30°C and quite humid.

After Herrnleis a really tough part of the stage began. We had to fight very steep ramps again and again. The heat costed so much energy and now cycling these ramps pushed us to our limits. The result was a lot of short stops and little progress. But somewhen we got it done and after a downhill passage through a forest were we could cool down we came to a nice resting place near Unterolbendorf which also had some water supply. There was also a map which showed the route and we noticed that it was making a detour later instead of direct heading to Wien. So we decided to follow the Eurovelo 9 for some more kilometers and than using the navigation for a shorter route.

We continued our tour through some smaller villages and after Wolkersdorf im Weinviertel we entered the outskirts of Wien. The bicycle roads in this area were quite good, but there was still not much to see. From time to time you could see the skyline of Wien. One last stop we made around 15 km from our goal. The sun was going down and so was our energy. But we wanted to finish the tour and not using public transport for the last kilometers. And so we fought for every kilometer till we entered the city, sweaty and exhausted. Now the sun was gone and we had to use our lights for the first time on our tour. Cycling in Wien was not that fun and we were so exhausted that we also could not enjoy the view of the city. But finally we arrived at our hotel and we could check-in quickly. Of course after a shower and some food we fell in our bed and slept like stones.