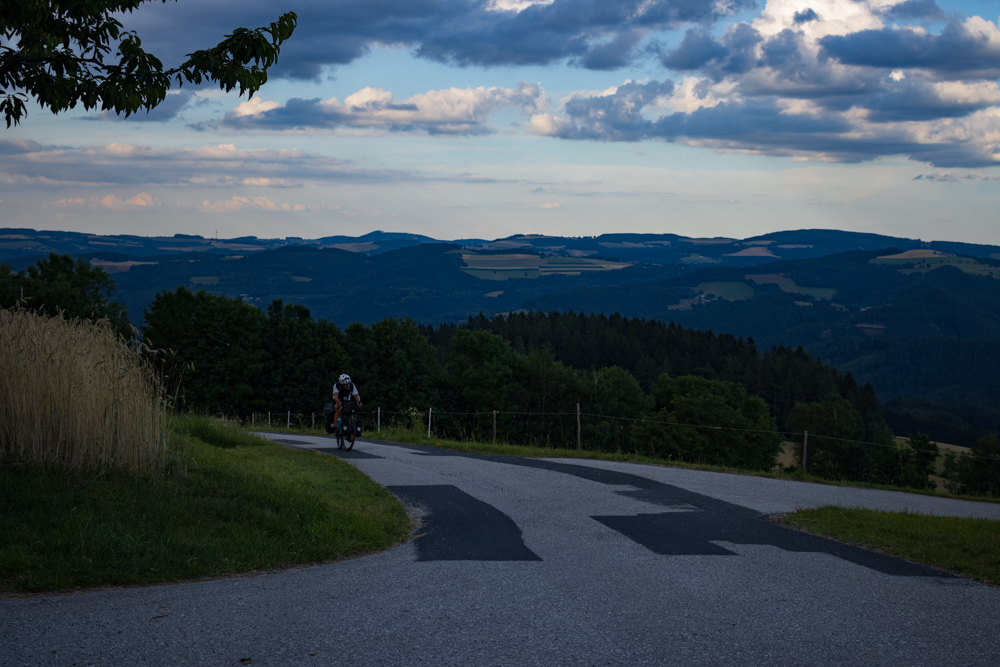 Alex fighting the last meters to a farm, where we ask for water.

We planned to stay three nights at our hotel in Wien. And of course, the first day we needed for recovering from the heat stage on the day before. We slept long and relaxed a lot. We only left the hotel for lunch at some vegan/vegetarian restaurant and went to the supermarket.

On the second day our energy was refilled, so it was time for us to explore the city. It was again a very hot day and Wien is quite a big city. So we weren’t in the mood to walk for miles to see every important place. Thus, we chose a more convenient method to explore the city: We booked a ticket for a hop on and off bus. But before we could start the tour, we went to our appointment for a Covid 19 Test within the city. The result was negative. Afterwards we bought some repairing stuff for the tent and had a really delicious lunch at an Asian restaurant.

As Tourists in Wien

We went to the next bus stop and got into the bus. There were two routes to take and you could also use an audio guide in different languages. Wien is characterized by many beautiful historical buildings, which we cannot all name. The highlights on the first route were the Opera, Lower Belvedere, City Hall, Votive Church, Prater and the Danube river. The second route took us along the Schönbrunn Palace & Zoo, Main Train Station, The Hundertwasser House and the City Park.

Each route took more than 2 hours, but to see everything this was better than walking or using public transport on your own. In general, the city was very crowded and a lot of traffic was going on. The city offers a lot of parks and local recreation areas, but many streets looked liked a desert of concrete where the heat builds up. However, with its history and beautiful buildings it was still worth a visit.

So the day had come when we wanted to leave Wien. After breakfast in our room we got the bicycles ready. It was a cloudy day, therefore the temperature was quite pleasant for cycling. We had to use the navigation to get back on the Eurovelo 9. It was a Sunday morning and the streets were almost empty. Also there were a lot of bicycle paths which made cycling convenient in the city. When we were back on track we passed the Austria Wien stadium and slowly left the center of the city.

Later we came to a little rest place we stopped and ate some snacks. When we continued the tour we cycled trough little parks and a “urban hiking area”. When we came to a crossing we recognized that Alex´s rear wheel again lost some air. So we tried to fix it, but when we used the Pitlock key to remove the thru axle, we recognized that the key was damaged and we could not use it. It was Sunday, so the repair stores and shops were all closed and we had no other option than booking an apartment and order the new parts 🙄.

Another stay in Wien

We found a really beautiful and spacy apartment just a few 100 meters away and checked in. Immediately, we ordered the replacement parts. So we had to stay at least two more days till the parts would arrive. At least, this gave us a bit time to repair the holes in the tent with the new bought glue. Alina also cleaned her bike in the cozy garden in front of the apartment and we could watch one stage of the Tour de France.

On the second day Alex went to the next bicycle repair shop to check if they can remove the thru axle. Also he wanted to replace his tires to get rid off the problem with constantly flat tires. When the workers also removed the front thru axle the screw for opening the axle broke. Anyhow, they could remove the axle but it couldn’t be used anymore. By chance Alex had the original thru axle with him and they could use this instead.

However, because of the heavy pressure Alex put onto the axle it would be better to replace also the other Pitlock axle. After research there was a Trek shop not that far and they had an axle that could be used. On the next day Alex went there and they could also replace the heavy used chainring. So the bicycles were good to go now and we wanted to start on the next day. But during the night and morning heavy thunderstorms approached and we decided to postpone the stage for another day 😑.

So the next day the weather was fine and the bicycles were in good condition, so we could start. The temperature was almost perfect, we had blue sky and the sun was shining but it wasn’t too hot. We followed perfect bicycle roads which led us further away from Wien. The local name of the Eurovelo 9 was “Thermenradweg”. After some kilometers the path followed the Wiener Neustädter Kanal. This also meant everything was flat and easy to ride. Near Baden we used a nice spot for our first stop. Next to the benches there was also a water supply which we used.

We followed the canal further. Most of the time we had a beautiful view on the “Wiener Alpen”. These were very high mountains and you could even see snow on top at least of one of them. We were not only thankful for the view, but also for not climbing them 😅. On our way to Wiener Neustadt where the canal ended, we passed a lot of smaller towns. A very populated area but still good to cycle. And of course, a lot of Austrian people were enjoying the day on their bicycles.

After Wiener Neustadt the area got a bit more remote. We followed the different little rivers and recognized that we came closer and closer to a mountain range. After a rest stop at a playground we decided that we wanted to cycle to Mönichkirchen. The distance we had to cycle was just around 35km and it was not too late on that day, but we knew that the town was located on a mountain on above 900m altitude. But we were optimistic that we could make it. Some kilometers later we took the chance at some nice benches to eat our lunch “out of our bag”.

When we continued our stage the path was slightly ascending, but it was still easy to cycle. Again we were following little rivers and came across some villages from time to time. As we came to another rest stop we performed our self covid test. Austria has implemented a system where you could send a picture of your test via a website and then they accept it as an official test. You need this to stay in a hotel. Shortly after we came to the town Aspang Markt, where the tough climbing started. There were really steep ramps and we needed breaks to recover every few minutes. It was a really a hard start. Good for us that there was almost no traffic, so making a rest stop on the street was no problem.

After this there were segments which weren’t that steep but still challenging. Our pace was very low and we had to fight for every meter. Of course some farms were also located in this area and even one farmer built a beautiful rest stop which we used to sit down, breath normal again, and write some lines in the guestbook. It was past 6 and we were afraid that we might arrive too late in the town to get an accomodation. So we called a pension to be sure to have a room for the night. Afterwards, we went on and continued fighting the mountain. A new problem was that we were running out of water. So we stopped at a farm and a woman gave us some water🙏. She also told us that the next kilometers won’t be that exhausting.

After some more moderate climbing there was even a very fast downhill segment. But at this time we were not happy about that. We only thought: “Oh no, we have to climb this again”. And so the last two kilometers we had to climb some more very steep ramps. We were so happy when we saw the sign for “Mönichkirchen”. The check-in was fast and without any problems. But we had no kitchen in our room. So we went quickly (without a shower) to a nearby restaurant for dinner. The kitchen was already closed but the staff and the chef were so friendly that they made us some fries. After dinner we got u a few snacks at a vending machine and walked back to the hostel. We were really tired and happy for a warm bed.