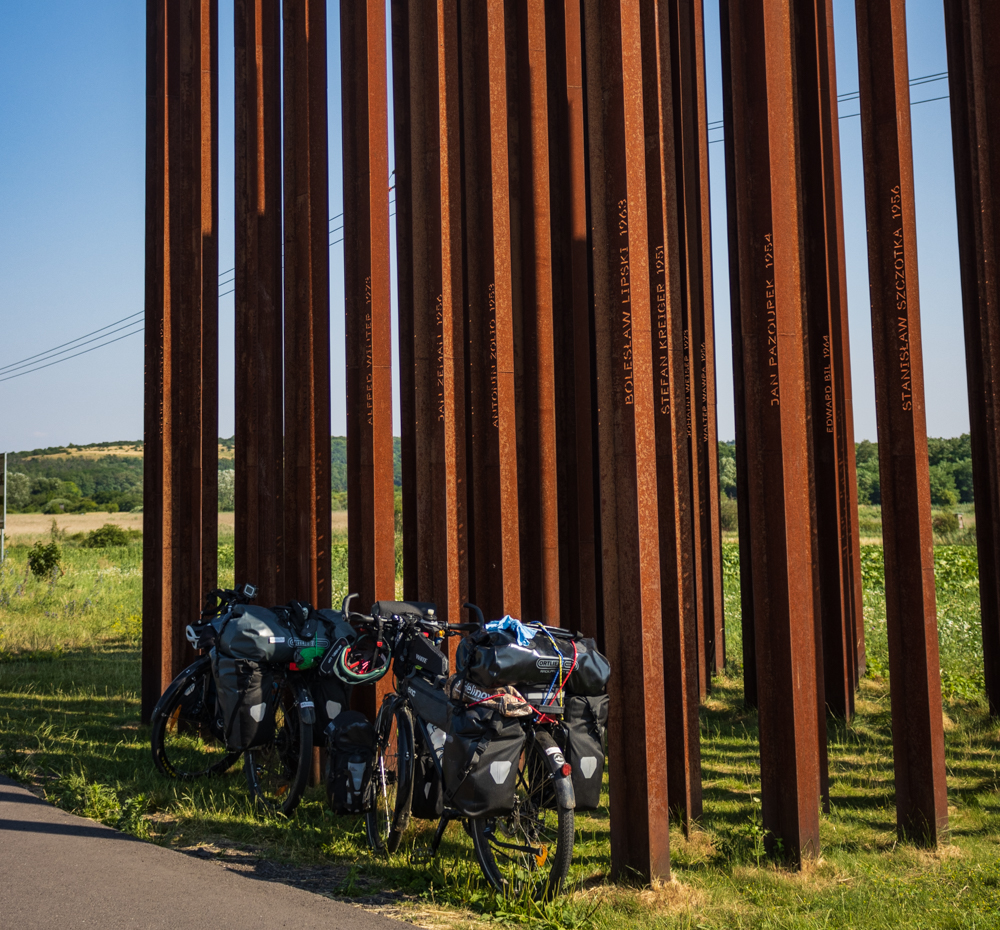 Gateway to Freedom - bikes in front.

We spent three days in the wonderful city Brno. On our first day we barely did anything. We were very tired from the stage on the day before. We only chilled at our apartment and took a little walk in the park around the corner. On the second day we first wanted to get something to repair our tent because it still had two little wholes. It was Monday, but a national holiday, and also the next day would be one. So most shops were closed including the outdoor shops. So we took a walk around the city and had a delicious lunch at a vegetarian/vegan restaurant. Then we bought some stuff at a supermarket and went to the famous Brno farmers market to get some fresh fruits and vegetables. After dinner in our room we went to the “Park Lužánky” park and had some beers.

The beauty of Brno

On our third day we wanted to visit some sights. Because the day before almost all attraction were closed. We started with the “Labyrinth under Vegetable Market”. When we wanted to buy tickets the staff asked for some Covid-19 test or certificate of vaccination. Of course we hadn’t any but we could perform a self Covid test. Therefore, we went to the next pharmacy to buy some test and performed the test at the entrance of the attraction. After the negative result we were good to go. The guide explained everything in Czech but we had an audio Guide in German. It was quite interesting to see the life under the market in mediaeval times. There were a lot of explanations and also some requisites. Not only food was stored down there, also a lot of stuff was going on and even a pub called “The golden table” was located there.

Our second attraction was the “Brno Ossuary”. It was a mediaeval grave where around 50,000 skeletons were buried. After archaeological investigations two of the tombs were newly arranged but one did remain untouched. It was a bit spooky, but also you think about what stories these people had to tell.

Our last attraction was the “Špilberk” with the castle on top. Meanwhile it was quite hot and climbing on the top was a bit challenging. But of course when we entered the castle we also bought tickets for the lookout tower. And there we had a fantastic view above the city and of course we made some photos. After this we were exhausted by the heat so we drunk two fresh handmade cool lemonades and went back to our apartment. There we prepared everything for the stage on the next day.

Before we started our stage we had an appointment for a PCR test. We would be soon in Austria and as far as we knew things would be much easier if we had a negative test. The location for the test was not that far from our apartment so before checkout time we got everything done. We had to cycle around two kilometers to get back to the Eurovelo 9. In Brno we followed the little river Svitava. From time to time we had to cross big main roads which wasn’t that funny. It didn’t took us long and we left the city behind. Our route led us on small bicycles roads and we did our first stop next to a little pond.

For the next kilometers we passed a some little towns and villages. It was getting quite hot and there were just a few shadow places in this area. Cycling was easy, so we made great progress, but there was not much to see because it was mostly farmland. Then we arrived at the area of the “Věstonická nádrž a okolí” nature park where also some lakes were located. Cycling along the shore was a welcomed change and also we had beautiful views of the mountains in the back. When we came to the little village Brod nad Dyjí we had lunch at a small restaurant.

When we continued our stage it was getting even hotter. And still almost no shadow in sight. So from time to time we made some rest stops. Along the Eurovelo 9 were many really nice resting places which all were worth a stop. This places also including some information about the nearby villages and historical background. After some more kilometers we came very close to the border of Austria. This path was also part of the Eurovelo 13 which is called the “Iron Curtain Trail”. Along the road there was information about the time during the cold war. At this area was a massive border where a lot of people died. In most cases the people wanted to escape from the UdSSR, but there were also deadly incidents where for example Austrian people died. From our perspective it was unimaginable that people could not move freely in Europe and even had to pay with their lives when they wanted to cross the borders. Crazy that these borders existed when we were born. How lucky we are, that those times came to an end.

The stage was almost at it’s end, but of course the climbing passages waited for us at the end. It was late but still very hot, and finally we climbed the last ramp and could look down to our goal Valtice. After cycling through the small town, we checked in at a hostel which also had some tent place. It was a former boarding school and had the charm of a psychiatric hospital. But we had every thing we needed and after dinner at the kitchen we went to bad quite tired.