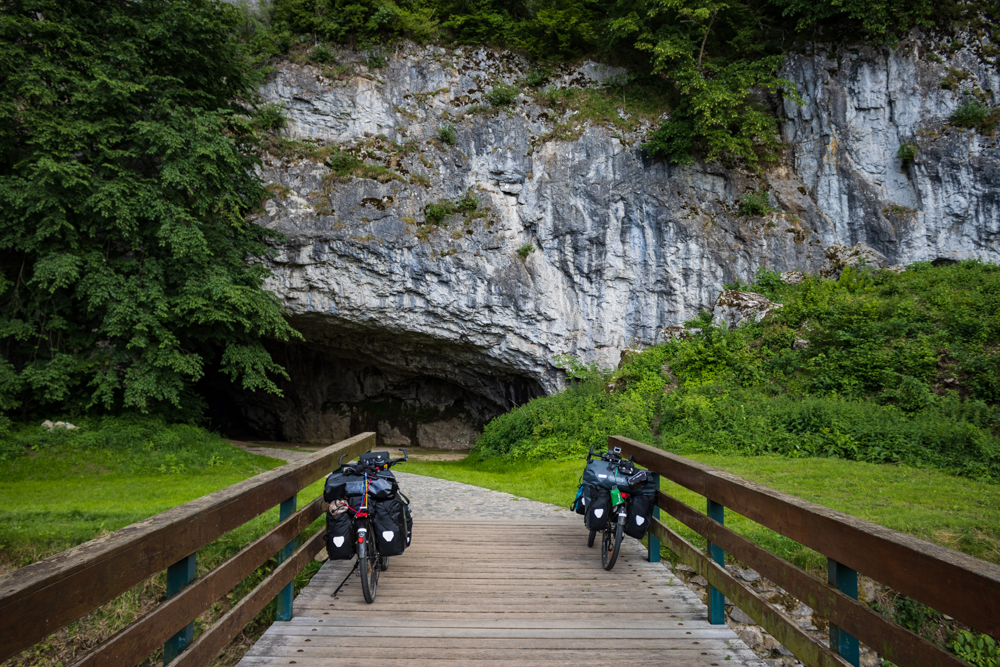 Caves in Sloup. Bats in there!

On our rest day in Olomouc it turned out that it was not the best idea to have some beers after a long and exhausting stage. So after breakfast we slept a bit more and started the day late. First we had to plan our tour. We weren’t that far from the Austrian border, so we did some research about the Corona measures. It turned out that they were quite strict and we had to do a corona test almost everyday. A PCR test was good for three days, so we booked an appointment for a PCR test in Brno, our next goal. Also we looked after alternative routes so we maybe would not stay long in Austria and cycle to a country where the measures weren’t that strict.

Olomouc – a pearl of the Czech Republic

Afterwards we took a walk around the city. For our next hotel in Brno we first bought some Corona self test if we had to perform a test. Then we visited the Botanical Garden and rested at a bench. Next to the garden was a music open air and we listened to the interesting rock music.

When we continued our walk we used the stairs inside the city wall and ended up in the city center. There were a lot of old and very impressive buildings. Also the main square with its fountains was nice to watch. We stopped our walk to have dinner at a restaurant at a mall. They had a nice variety and even delicious vegan food. We ended our walk at the historic “Katedrála sv. Václava Olomouc”, which was visited by famous people like Mother Teresa and Pope John Paul II.

Leaving Olomouc – a too short visit

So we really liked Olomouc, it is a beautiful city, but we already planned our next steps so we had to leave the city. After breakfast in the hotel we got our bicycles ready and started our stage. We cycled a bit through the city which was very easy due to the good cycle paths. When we were back on the Eurovelo 9 the sign said it was 100km to Brno. During the last stages we learned that often local bike path signs have just the next smaller town written on them and not on every sign you can find the “Eurovelo” sign. Till Olomouc we had to follow the local cycle path 4 and we thought we should do it also for the next kilometers…

So we maybe missed one sign and followed the wrong local cycle path. Our route led us further south and we came across many small villages. There were not much forest but it was not too hot so it was okay to cycle in the sun. We recognized that we should cycle more east wise as we did, and when we saw some signs in Rakodavy we checked our navigation. We were on the wrong path but thanks to the good cycle path infrastructure in Czech we turned to another cycle path which would led us back on the Eurovelo 9 at the city of Prostějov.

Before we came to Prostějov we did our first rest at an abandoned football place with some benches. The road in this area was not so good but when we came to Prostějov we could cross the city on perfect cycle paths. After the city there were some smaller towns, villages and also some lakes. In this area there were more forests. Also the good weather invited many Czech people to sit at the local restaurants and enjoy the day. In Plumlov we cycled around an unusual looking castle and a beautiful lake. We also had to face our first ramp. When we cycled further the area got more remote and we entered a hilly area.

Going high for some kilometers

We knew that this was the area of the highest peak of the stage. So the climbing began, but it was not too steep. We cycled for a few kilometers through these narrow forest and it was just going upwards. But still after some kilometers it was not that exhausting. We were glad that there were no ramps and we could even enjoy the climbing. After a short rest in the woods next to a sign we ate some snacks to get the power to fight the last 2 kilometers. And of course the hardest part was at the end, but we also got this done. And as a reward an observation tower was waiting for us. So we also walked the stairs up and enjoyed the view from the top.

When we continued our tour we crossed some smaller villages surrounded by farm land and some forest. We cycled on main streets and from time to time we had to beat steep small ramps. It was quite late and we thought lunch was overdue. Most of the shops were closed so we took the chance when we came to a restaurant at Sosuvka. The staff was very friendly, quite supportive, and helped us with our order in English. We had a vegetable soup and fries with baked cheese which was really good. Freshly strengthened we continued our stage and after a very steep downhill passage (14%!) we stopped at a cave. A lot of people were around and on the high rocks you could watch some people climbing.

The beautiful nature of the Czech Republic

A few kilometers later we left the main road and entered the “Vývěry Punkvy” nature reserve. There started a very long downhill passage which was more than 10km. It wasn’t steep so in fact you almost could not see that it was going down but our pace was quite fast. Also the area was fascinating. Thick forest surrounded us and also high rocks. It was like cycling in a very small canyon. In the rocks there were often big cave which were surely created by nature in centuries. A lot of people where around and enjoying the nature. At the end of the path was even a cable car which brought you on top of one of the rocks. But it was late so we did not use it.

After some smaller roads we had to turn on a big main road. We have been close to Brno, so there was a lot of traffic going on. But the street had a shoulder so cycling was not too bad. Before Brno we turned on cycle paths an arrived at the city on a minor road. There we left the Eurovelo 9 and used our navigation to cycle to our accommodation. Check-in was fast and easy so we took a shower and walked to a convenience store to buy us some food. Afterwards we watched some Football, sadly on that day Czech lost their game and had to say goodbye to the tournament.