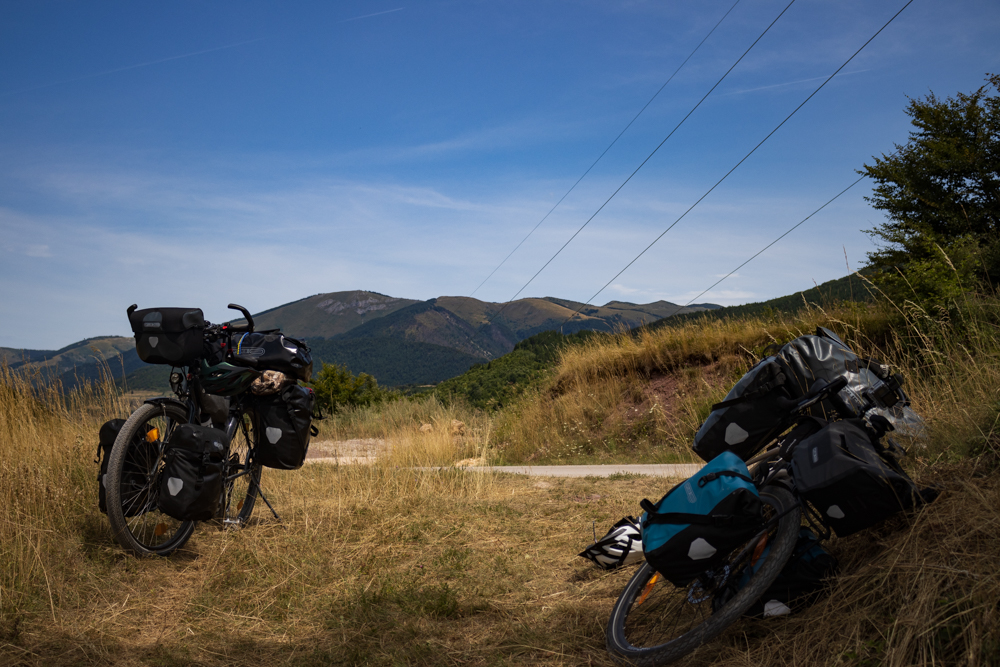 Bikes with huge mountains in the back at our stop after climbing in the heat.

Due to the expected heat during the day we again stood up pretty early. After breakfast in our bed and getting everything ready we started our stage around 6:30. We talked to our host the day before and he told us that there was a lot to see around Novi Travnik and in the south of Bosnia and Herzegovina in general. So we decided to cycle to the lake Ramsko jezero and therefore leaving our planned route. To get to the lake there were different options. We tried to cycle on minor roads to avoid heavy traffic.

Some climbing in the morning

So we cycled on the street R-39 from Novi Travnik. The street was in good condition and there were little to no traffic. So cycling was more relaxed. Most of the time we cycled through dense forest and from time to time we crossed little villages. Our path took us higher and higher. But climbing was not too bad there were no steep ramps and the ascent was in a moderate level so it was not too hard to ride. Our first little break we made at a gas station and ate some snacks.

Still there was a lot to climb but without any ramps. We came closer to the top and had beautiful views at the village Monjići which was surrounded by summits. After a few more kilometers we arrived at the peak of the mountain at 1010m altitude. We made a short break near the road in the middle of a forest. Of course, also here a lot of trash was just thrown into the nature. After the summit a long downhill segment followed. We cycled through a canyon similar area with huge rock formation and big trees. After some time the river Poniri followed the street. The street was brand new and there was almost no traffic but we heard some dogs in the woods, so there was no time for a long break. In addition, there was mostly no sunshine whereby we were freezing a bit.

Dead end in the rock street

After the downhill part we arrived at the city Gornji Vakuf-Uskoplje. We stopped there to refill our bottles. On a building was written supermarket so Alex entered to buy some water. But in there was just a clothing store. A little confused he walked out the store and a man from another business asked what he was searching for. After Alex said that we searched for water he let us refill our bottles at his store. Very friendly! We continued our stage. There were some options to get from this city to lake Ramsko jezero. So we tried the shortest option first.

We cycled through the city and left it on a small asphalted road. Just a few kilometers later we came to the village Uzričje. There the asphalted road ended and changed into a gravel road with big rocks. In addition, a climbing segment started. We didn’t managed to stay on our bikes and could not cycle on this road. So we decided to turn back and choose another option. We crossed Gornji Vakuf-Uskoplje east wise and turned onto another minor street which should bring us more south to our goal.

Also this street was in good condition and we followed the river Vrbas. We cycled through a valley in a forest area so there were not much climbing segments. We passed several small villages (just one dog accident 👍) till we came to a crossing which we didn’t remember on the map. We looked at the phone navigation and saw that we had missed a turn. So we had to cycle back around three kilometers😝. The last curves on the right road before we got again on a main road were quite tough. We had to climb on gravel but just for a few hundred meters. And the reward was a stunning view on a mountain range and a break in the shadow.

From now on we used our navigation and set the option for avoid vertical meters. For this reason we turned after a few kilometers on a perfectly asphalted road into a gravel road. It was a steep descent where Alina fell of the bicyle once. But without any injury (bike and human) we could continue. After some time the street was asphalted again and cycling was easier. But it was still very steep descent so our brakes where very hot.

After the downhill passage we came back to a minor road and immediately a climbing passage started. It was early afternoon and the sun was shining strong. So we needed some breaks in the shadow time after time. Our road led along steep mountain slopes where we had beautiful views. But also there was a lot to climb what was really tough. After some hills, the downhill passage to the city Prozor-Rama begun. We made a last stop at a supermarket to buy some water and had a little snack. The last eight kilometers we cycled on a major road but there was not much traffic going on. After some curves we had an amazing view above the lake Ramsko jezero and the surrounding mountain range.

This is one of the most beautiful places we visited so far. We cycled the last few kilometers and arrived at our apartment which we already booked. The family who run the apartment were impressed that we travelled Bosnia and Herzegovina by bicycle. In addition, we recievd a lot of vegetables out of their garden which we used for dinner and which were really delicious. In the evening we went to the supermarket and got us some supplies. Afterwards we spent some time at the shore of the lake and drunk a nice cool beer in this quiet little paradise..