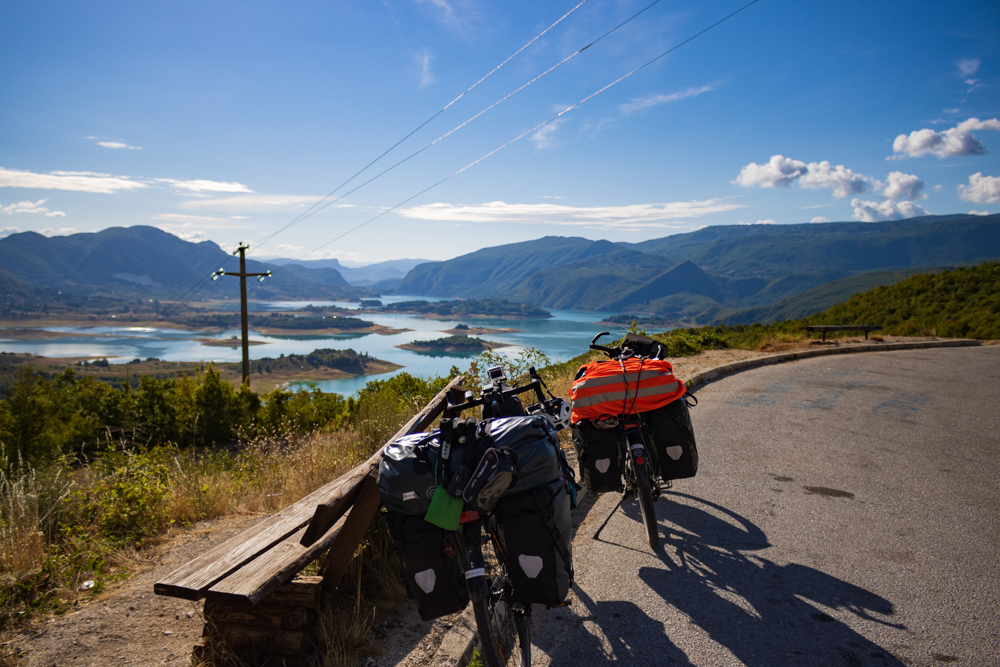 On our rest day in Ripci at lake Ramsko jezero we needed still time to recover from the stage on the day before. So we started slowly into the day. Also there was a lot of rain and very strong winds (nice for photos😁, and quite cozy in our apartment). However, unfortunately the conditions were not suitable to take a swim.

In the evening the weather got better so we sat some time next to the lake and walked to the monastery at the peninsula Šćit, lateron. Again, we had stunning views over the surrounding mountain ranges. And when we entered the church a nun was practicing music. Thus, we sat some minutes in silence and just listened reverently. A really magical place. Back in the apartment we had a big salad from the delicious vegetables that our hosts gave us. Afterwards we did some stuff at our notebooks and went to bed.

We were a bit late when we prepared our bicycles to start the stage. We wanted to go to Tomislavgrad because there we could make a Covid test which we needed to cross the border to Croatia again. Our host helped us and showed us on a map where we could do a test and also called the hospital so that we knew the time when the tests are performed. Afterwards we said goodbye and started the stage.

One main street led from Ripci to our goal Tomislavgrad. But between these towns is a mountain range. So right from the start we needed to climb. It was not too steep but nevertheless our velocity was not too high. We had so many wonderful views over Ramsko Jezero, it was just amazing. After some time we came to a bench were we made our first stop and enjoyed the last view over the lake. It was around 9 o’clock and it was getting a bit hot already.

On the street was not that much traffic going on so it was not that stressful. But also there was not much shadow on the street, so we had to rest in the sun from time to time. After a while of climbing we looked back and saw a pack of stray dogs around 500 meters behind us on the street, led by a huge german sheperd. But after throwing a stone and yelling at them they didn’t follow us. However, we continued cycling with a bad feeling to maybe find the next ones just around every corner. We were really close to the summit at around 1250 meters altitude when we heard some barking near the streets. Due to trees and bushes we couldn’t see anything so we just tried to keep the pace and couldn’t celebrate the arrival at the summit.

Directly after the summit a downhill segment followed and we entered a plateau where you could see for miles. The area mostly consisted of grass and stone formations. A big change compared to the area we have been before. At this plateau you also could see large herds of cattle. At the end of this area we again had to climb a bit. Next to the street were huge amounts of trash which looked like an illegal dump. A really depressing scene, like an ocean out of waste… It didn’t take long and we also reached the peak of this hill. Again a downhill segment followed where we had wonderful views at Tomislavgrad and its surroundings.

Arriving in Tomislavgrad to get the test

With a lot of speed we came closer to the city but of course shortly before we entered the city we had some last climbing to do. We were on a major road with a lot of traffic so we had again to fear the cars and trucks. We had to cross the city to the hospital were we could perform the test. After some irritation with Alex’s name we got our negative results within an hour and cycled the last kilometers to our already booked motel. Later we went to a nearby restaurant and supermarket. Afterwards we planned our next destinations of the tour.