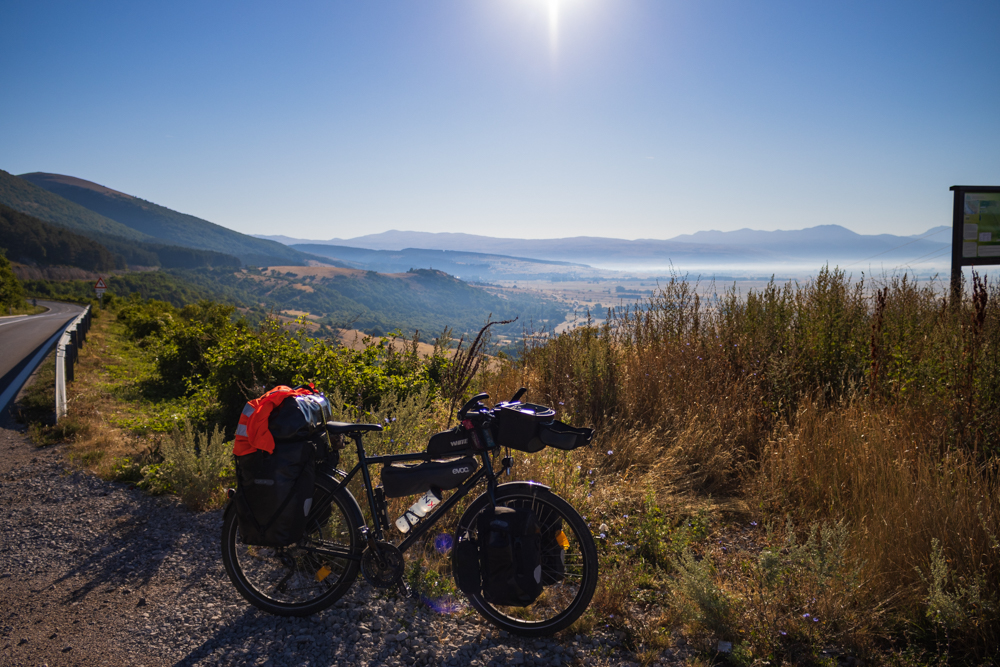 Last view over the area from the mountain peak.

Our room had no air condition so we slept with an open window. Part of the Motel was also a 24h gas station and some car wash. From time to time there was loud noise and we hadn’t a good sleep. However, to avoid the heat in the afternoon we stood up early and had breakfast at our room. Afterwards we prepared the bicycles and were good to go. From Tomislavgrad we had a nice view at the top of the mountains and some mist in the valley. Our route crossed the city and brought us more south wise. The goal for today was the Adriatic Sea of Croatia and the region of Makarska. Therefore, we first had to climb a bit. When we looked back we had a wonderul view over the plateau where Tomislavgrad was located.

After the we reached the peak of this segment we had again a stunning view. This time we could see over lake Buško jezero. After a short break a very long and speedy downhill passage followed. The street led through tree and bush land and the lake was surrounded by a high and impressive mountain range. So there was a lot to enjoy during this ride. After this we cycled through some forest and came closer to the Croatian border.

The checkpoint on the Bosnian side we passed fast but when we came closer to the Croatian checkpoint a long traffic jam was waiting for us. The traffic was so slow that the people from the cars were walking around and went back to the car when the traffic moved a bit. One bosnian guy told us that we just should overtook the other cars with our bicycle, noone would mind. So we did and when we wanted to go back in a the traffic row another man pointed at us that we should continue overtaking the cars. So our experiences with bosnian people ended the way they started: just so friendly, open, and relaxed 🥰. Thus, we could cross the border much faster as if we would have stayed in line.

After the border some switchbacks led us down to a valley. But it didn’t take long and we had to climb again. Meanwhile it was getting a bit hot and some parts were quite steep. So we needed a few breaks from time to time. When we passed the peak we again had a wide beautiful view. In the valley we could see huge forests and at the horizon high mountain ranges with impressive stone formations. The downhill segment which led through the valley was more than 20km long. We enjoyed it but also had to be careful at the sharp curves.

We came closer to the coastline but couldn’t see it yet. Therefore, we cycled along massive and wonderful mountains with spectacular rock formations. We couldn’t stop being amazed. A little more climbing and after a curve we finally had a stunning view over the Adriatic Sea. Of course, we stopped at the next rest place and took some pictures. We enjoyed the view and were happy that we finally were back at the sea. After some more switchbacks we took the first chance at a restaurant where we had some nice lunch on the veranda with a view on the sea. Managed to eat all the stuff we ordered, although the creepy waiter thought we couldn´t.

The last 15 km we cycled along the coastline. First there was a long downhill segment but before we came to our goal we had to do some final climbing. We checked-in at a camping ground close to Makarska. It was still afternoon so we made us ready for the beach. A lot of people were enjoying the sun at the beach or ate at one of the many restaurants. But we just lied down, took a nap and finally jumped into the water for some minutes. This beachside close to the city of Makarska was really crowded and we hoped to find some more remote place for the next days. Afterwards we went back, had some dinner, and went to bed quite early.