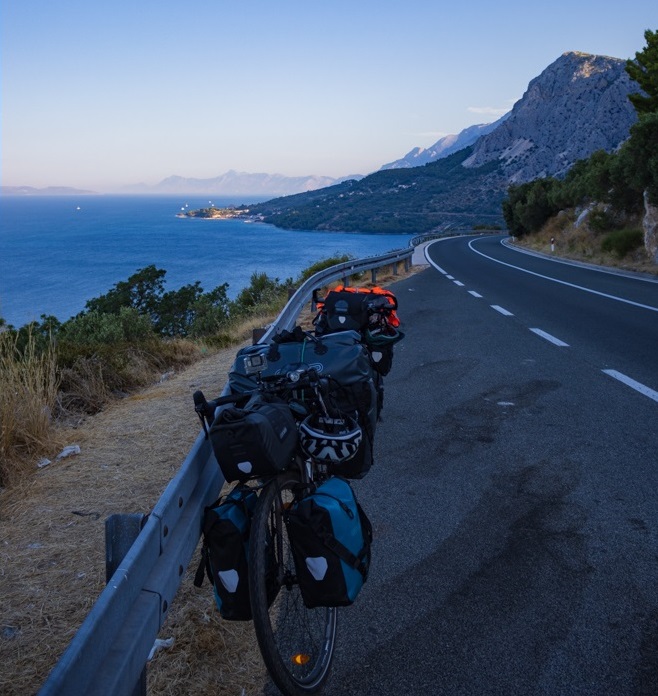 Bikes in the morning - in front of the adriatic sea.

In this evil heat it was like always, we had to get up very early. The sun didn’t raise yet and we were sitting outside the tent and ate breakfast in the semi-darkness. Next to us were two bike traveler from Germany and they also stood up early. After breakfast and morning cleaning we dissembled the tent, prepared our bicycles, and were ready to go. Starting at 6:30 we planned to take the ferry on 10:20 in the 50 km distant Town Ploče. From the camping ground led a short ramp back to the major street which brought us into Makarska. We were already out of breath after overcoming the ramp.

We followed the Eurovelo 8 south wise through Croatia. So first we had to cross the city of Makarska. It was a bit irritating because the GPX track led us through one way streets in the wrong direction. So we used the sidewalk and were extra carefully. Good for us that on sunday mornings not much traffic was going on. After cycling through the old town and having some nice views on the Adriatic sea the street led us outside the city Makarska.

Up and down along the Adriatic sea

We followed this coast road along the shore of the Adriatic sea for most of the tour. Just at the beginning a lot of climbing was waiting for us. Although it was around 7 o’clock it was around 25°C. But due to the high mountains the sun needed some time to rise above them and increase the heat. The ramps weren’t that steep but we also had some headwinds, so it was tough work to climb them. From time to time there were some rest places along the street which we used for short breaks and enjoying the view at the sea.

After a pleasant downhill passage we passed a lot of smaller towns. In this area it was very hilly and we often had to tackle short ramps. On the right side we always saw the sea and on the left side these big mountain ranges with massive rocks and some little trees and bushes. The street was in good condition and moderate traffic was going on which most of the time let us enough space. After another break next to the street our path lead us inland.

A ferry to paradise

After some tough climbing meanwhile it was getting hot again we came to the Baćina lakes. From the peak we had a stunning view about the lake and the surrounding mountains. Also a speedy downhill segment led us down and nearer to the city of Ploče. A few kilometers along the city and we came to the ferry port. From there we had to take a ferry to our destination Trpanj. We arrived right in time just 10 minutes before the departure of the 10:20 o clock ferry and managed to get a ticket for it.

The ferry was pretty crowded. So we got us some drinks and something to eat and sat us inside. We were really tired and inside was some air condition which we needed to cool down. The cruise took around one hour and we just did a walk outside on the ship for some photos. When we arrived at Trpanj we had to cycle for another two kilometers to our camping ground which had its own beach. We built up everything and than just chilled. There was also a bar at the camping ground where we drunk some cold beverages. In the evening we walked to the city center of Trpanj to buy some food. After dinner we went to bed pretty early because we were so tired.