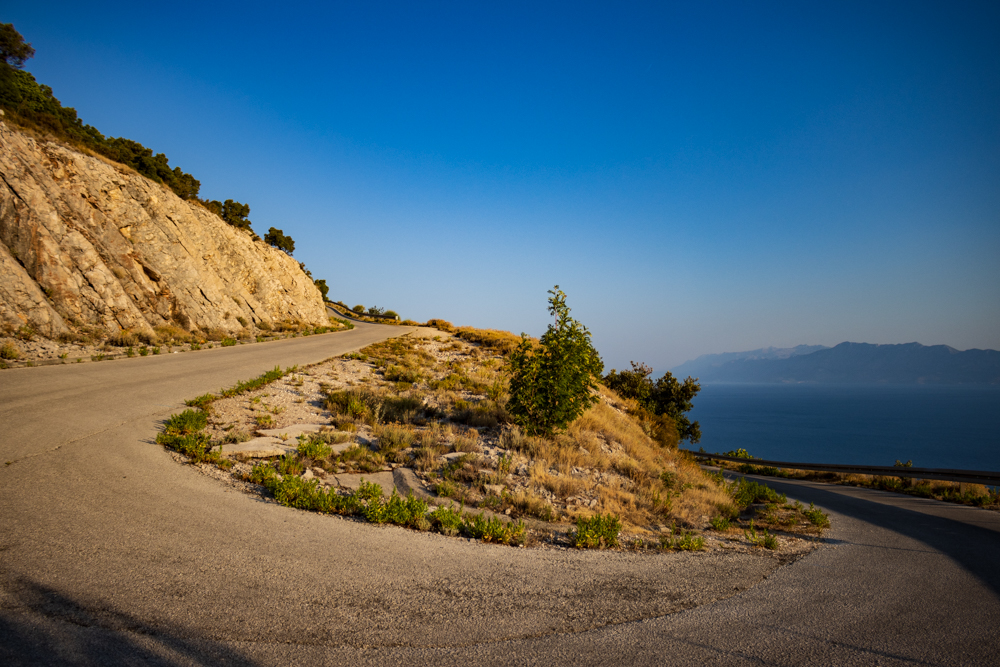 And further on - crazy views over the sea included :)

In Trpanj we spent three wonderful days without any cycling. Our camping ground was located next to the Adriatic sea, so Alina walked every morning from our tent into the sea (100 meter🤩) for a swim in the quietness of the early hours. Meanwhile Alex took the time for more sleeping. Later in the mornings we sat at the campsites own bar and had good fresh coffee. It was a beautiful place but it was almost too hot. Even during the night it was around 28°C which made sleeping a challenge.

One day we walked into the town of Trpanj and had dinner at a nice restaurant. Afterwards we walked along the harbor and enjoyed the views with an upcoming thunderstorm. One remarkable thing of this area was the howling every night some hours after sunset. After some research we found out that it might be the wild golden jackal. Also some of the dogs at the campsite started to howl leading to an impressive chorus giving an echo from the huge moutains. But all good things must come to an end, so we had to start our next stage and left Trpanj.

Leaving Trpanj before the sun awakes

Our next big goal was Dubrovnik. Even it was just around 100km there would be a lot of climbing along the coast. So we decided to make a stop in between and booked an apartment in Slano, air condition included. At this time of the year it gets really hot during the day, so we stood up around 4 in the morning and hoped we would finish the stage early. The problem was that this early in the morning it is almost dark. We started with breakfast and got everything ready step by step. It was already 6 when we left the camping ground.

The first shock we had was after 100 meters. Alex tire was flat. He pumped the tire up a day before so we thought it was maybe just a mistake and pumped it up again. Luckily the tire was good and we could continue the stage. In the beginning a mountain was waiting for us. Slowly we fought our way up along the winding road. The sun was up now and we had beautiful views on the sea but it was hard work to cycle these steep ramps. Around us were just rocks and bushes. And there was almost no traffic.

When we passed the top we cycled through some forest and after some time a downhill segment followed. During the downhill Alinas bike started to have some problems with the chain jumling while the pedals were idle. We just hoped it was a stone or stick which got into the chain and cylced on. We came to a crossing where we could decide to follow the main road and take a shortcut or follow the Eurovelo 8. We stayed on the Eurovelo (once we saw the traffic on the main road) and after passing a small village and a tunnel we were on a minor coast street with nice views on the sea. For the next kilometers we followed the coastline through a wonderful landscape with small villages and a lot of vineyards.

Climbing the second hill and further problems with Alinas bike

When we left the coastline and headed inland the second big climbing path started. It was getting hot but in this area were some forests from time to time, where we could rest in the shadow. When we arrived the peak we came to a rest place with an old wooden boat. Time for a short photo stop. Afterwards we passed some roadworks and we came to a small market. We bought us some snacks and refilled our water. This stage was already pretty exhausting. After the break a fast downhill part followed and brought us to the town Ston.

Alina meanwhile had still some problems with her bicycle. It made strange noises when she was not pedaling, but there was nothing we could do about, so we just cycled on and she tried not to stop pedaling. After some kilometers on a street without any shadow in sight we came across the major street in this area. Again we had the choice between taking a shortcut or following the Eurovelo. Also this time we followed the Eurovelo.

A martyrdom in brutal heat

It was around noon and the sun was shining like hell. The temperature on the street felt like above 40°C and maybe even was. And our navigation showed us one final steep mountain to climb. So we did and the martyrdom begun. In this heat every single meter was a fight. We took so many breaks, drank so many water (of course warm like tea) and had to fight so many ramps. The beautiful views couldn’t reduce the pain. When we saw the last ramp Alina needed a break (almost collapsing), so we crouched under a small tree in a tiny shadow place and stayed there for some minutes.

After we passed the peak a downhill segment followed which was interrupted by two ramps which demanded everything from us. After the final downhill part, Alex also needed a break immediately and was lucky to find some shadow place next to the street (would have needed that up there!). The last 2 km we dragged our way to Slano and were so much relieved when we arrived at the apartment. After a shower and some resting we went to a restaurant for late lunch, got some supplies at the supermarket, and rested to regain energy for the last kilometers to Dubrovnik.