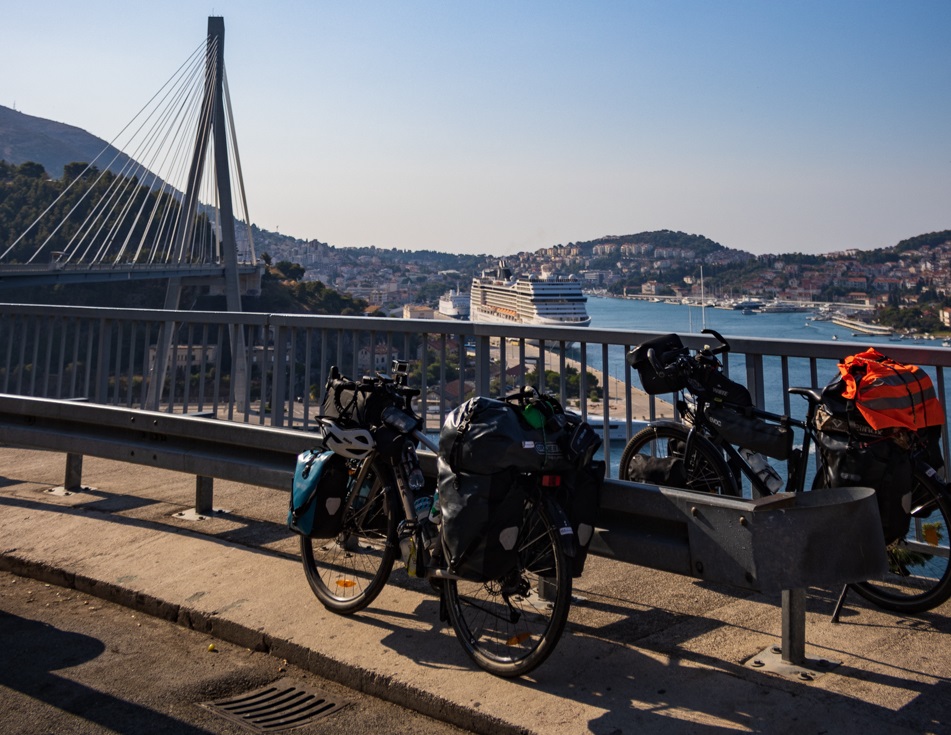 We stayed just one night in Slano and stood up again pretty early because another hot day was waiting for us. The stage on the day before costed a lot of energy and we still felt the struggle in our bones and body (and mind…). But we already had booked an apartment for ten days in Dubrovnik because of the heat and the tough stages in the last weeks we needed some timeout also for regaining motivation. Also Dubrovnik should be our final destination of our east Europe chapter.

Still tired we had breakfast in our kitchen with air condition and afterwards we got everything ready. There were different options to get to Dubrovnik from Slano. If we would follow the Eurovelo 8 it seemed that we had to do a lot of climbing again. And we weren’t in the mood for climbing. Also we would cycle on minor roads and Alina still had some problems with her bicycle. So we thought there we might get no help if the bicycle would quit the service completely. So we decided to cycle on the major road which also should be faster.

Comfortable cycling on the coast

The start of the stage was pretty nice. We had fantastic views above the Adriatic Sea and the Croatian islands. Every few kilometers you could make postcard like photos. Also the street was in good condition and in the morning it wasn’t that hot. Traffic was also not that big problem. From time to time we made some stops at rest places and enjoyed the views.

The first climbing we had to do was not too tough. But still we needed some breaks. On the top we stopped for some picture of course but also recognized a lot of trash next to the street. A constant problem not only in Croatia. A little later we had a fast downhill segment around the Zaton bay surrounded by beautiful nature. Some climbing later we saw the city of Dubrovnik and again had to stop for some nice pictures.

After a few kilometers we cycled on the “Most dr. Franja Tuđmana” bridge and entered the city of Dubrovnik. We had to cycle four more kilometers through the city to get to our apartment. It was before ten so we were pretty early and could not check-in but we could leave our bicycles there. Afterwards, we first drank some coffee at a restaurant and later had some very delicous lunch at a Thai/Japanese restaurant. After check-in it was time for some bike cleaning action and Alina brought her bicyle to a repair shop to check for the problem. For the rest of the day we relaxed and tried to recover from the exhausting stages.