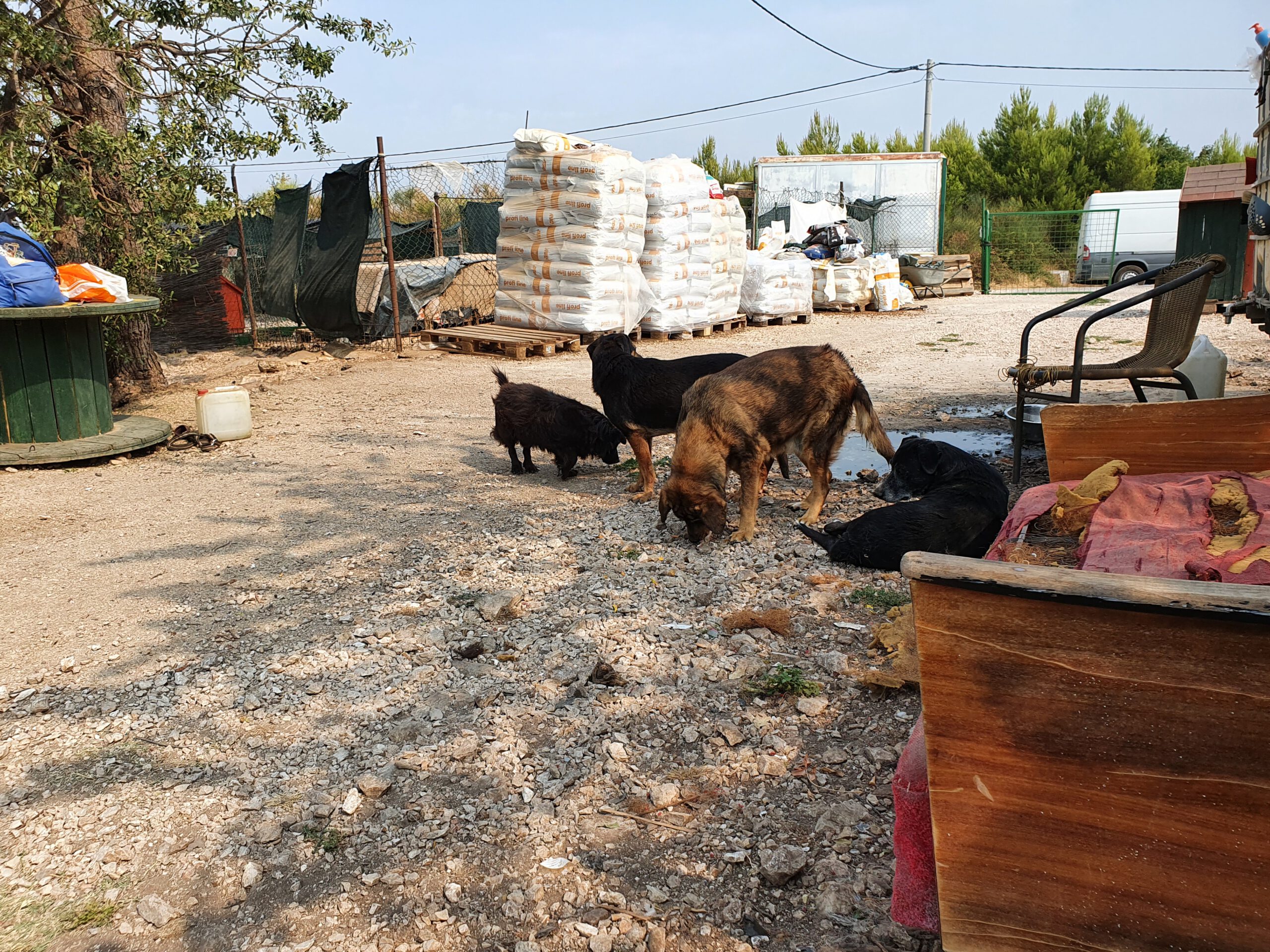 The entrance area - and all the greeting staff.

Because of the heat during the last stages we decided to stay ten days in Dubrovnik to regain energy. Also the motivation dropped a bit, so we thought a break might be usefull. Alina brought the bicycle to the repair shop due to the issue with the free hub. The part was broken and had be replaced. The problem was that the shop didn’t have it and Alina got told that it would take weeks to get the part. So we tried to get it from Germany and it should be in Dubrovnik within 10 days. We extended our stay to two weeks to be on the safe side. The part came in time and the shop could replace it. So we were good to continue our tour.

Hiding from the sun and enjoying the sun

But before that we also did a lot of things in Dubrovnik. The first week of our stay we really wanted to relax. Some days we chilled a lot in our apartment which had air condition. This was needed when you have temperatures between 30 and 40°C during the day. Of course we visited the beaches of Dubrovnik. Most of them were pretty crowded but we found Solitudo beach (also a camping ground is located there) which was quiet and also offered some inexpensive sunbeds. Like almost every other beach also this beach is gravel and stones which didn’t stop us from enjoying the clear blue sea.

In addition we met Elouan from the Switzerland how was also traveling through Croatia with his bicycle and even made it to Albania. The young man was on a very speedy tour and we spent a nice evening with some beers together at the Copacabana beach.

Also we visited the old town of Dubrovnik. Of course thousands of tourists visited the area and it was the most crowded place we saw for months. But still we have to say that the old town is just beautiful. A lot of historic and reconstructed buildings make a great atmosphere which we enjoyed. On the downside the massive touristic success led to a decrease of local people living there and craftsman shops moved out of the old town, a taxi drive told us. Now there are a lot of restaurants and you can buy souvenirs everywhere (probably made in China, of course). Before leaving the old town, we had to visit a small vegan restaurant and we enjoyed a delicious dinner.

Our apartment was located in Lapad. Our host was very helpful and friendly. Also the area around us was quiet and we could relax. After some days of relaxing we wanted to be more active and started running. Nearby was the “Park šuma Velika i Mala Petka” which is a small park with a mountain in the center. Of course after running the mountain we got sore muscles for the next day. So we decided to run the next time along the coast to avoid hilly area. This was more easy and we discovered a beautiful spot with nice views on the sea and the Croatian coastline. There we went lateron to watch the sundown with some beers,

Meeting the dogs of Dubrovnik

On the second week we spent three days at the animal shelter “Azil Zarkovica” and helped as volunteers. This shelter is badly underfunded, but the owner and her two coworkers do their best to care for more than 300 dogs and maintain this place. There are two areas. One where the dogs can move freely and the other which contains of kennels. We helped to walk the dogs and during this the staff was cleaning the dog kennels. Not all dogs get along with each other, so you had to manage when which dog could be walked. The staff was very grateful about any help. They are really working hard and doing this every day without any break. Really tough conditions!

Of course some dogs where injured and got as much treatment as the shelter could afford. It was heartbreaking to see them and also there were some dogs which were so afraid of humans that you know that they were badly mistreated. The staff told us a lot of stories and it was so nice to see when dogs recover or enjoyed the walking or the companies of people. So we highly recommend to visit this place when you are in Dubrovnik and help the staff, make some donation, and of course don’t forget to bring some treats for the dogs.

Get ready for Italy

Our next destination was Bari, Italy. There is a ferry from the port of Dubrovnik which should bring us there. But of course before taking the ferry we needed to perform a Covid test. After the test we went to the local pet shop to spent our last Kuna cash for some food for the shelter. Afterwards we went to a vegan restaurant and had a nice dinner. Meanwhile our negative test results came via email so everything was good to leave Dubrovnik on the next day.