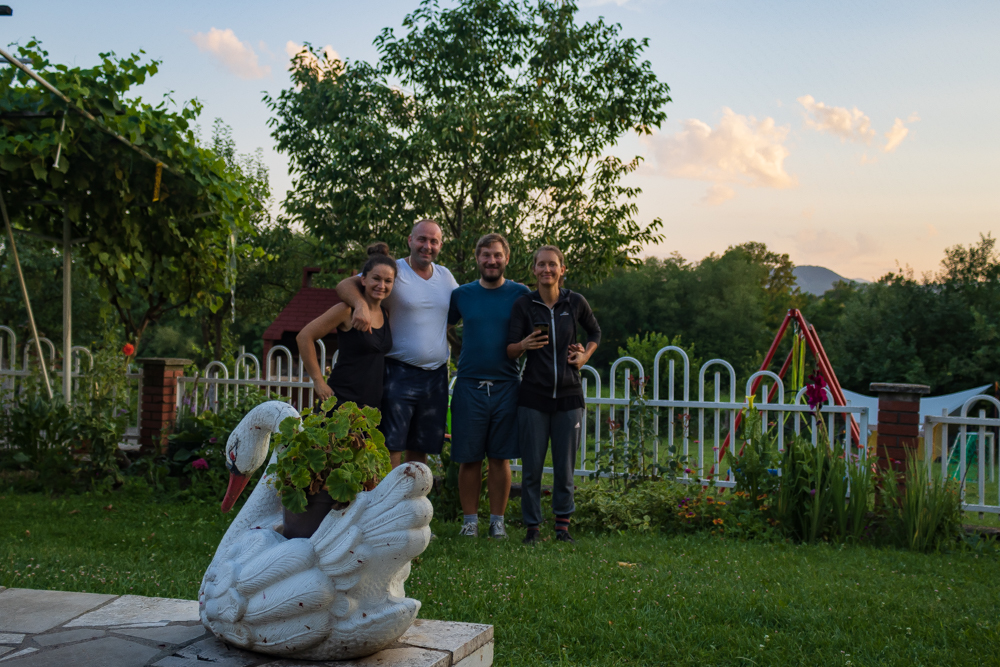 It was so nice to stay at you farm Dragan and Dragana - "Hvala"!

On our rest day at the “Eko agro Farma” we started slowly into the day. Our wonderful host prepared a breakfast for us with delicious self-made jam and ajvar🥰. Of course we also bought some of their products for our journey and got some Aronia juice as extra gift 👍. After breakfast we had to do some stuff on our notebooks and did a little walk around the farm to visit all the animals. In the afternoon we walked in the nearby village Brankovići and had lunch at a restaurant. Afterwards we bought some supplies at the supermarket and walked back to the farm. There we relaxed and also walked around and had a look at the animals. After dinner we went to bed early hearing the sounds of the traffic from the nearby horror road E73.

Starting in the mist into the busy traffic of E73

We stood up a little later than planned and where surprised by the mist which the area was covered by. It was a very wet morning, so we started with breakfast. Afterwards we dissembled tent and tarp and put it completely wet in our bags. When we got our bikes ready Dragan and his wife Dragana said goodbye to us and we started with squeaky brakes into the thick mist. We had to follow a major street (had have already nightmares about that…). Although it was before 7 a lot of traffic was already going on.

It didn’t take long and the first cars and trucks passed us so close that it frightened us. In addition, the mist ensured that we couldn’t see far and our glasses were constantly mist up. After some time the mist was gone and the sun started to shine. We were surrounded by beautiful nature, mountains covered with forest, towns that settled on the slopes of the mountains and stunning views into the valley. To bad that we chose a bicycle to cross Bosnia and Herzegovina because the traffic was hell and we couldn’t enjoy the beauty of the country😕. Also on this main road we had a dog accident, as one (probably stray) dog ran in full speed from an industrial place into the busy traffic and wild barking after us. Good that we could cycle really fast here and no cars or trucks hit us.

After some kilometers our route turned into a minor road and the traffic got less. So we took the first chance at a bus stop for a break. The minor street was in good condition and it seemed to be a better place for cycling. But then we saw some stray dogs. They ran away when we came close. Nevertheless, stray dogs and cycling is a bad combination. Our road followed the river Bosna and we came closer to the city of Zenica.

From the distance you could already see the smog of the city. And after some climbing before we entered the city we had a crazy views above the city. A lot of giant industrial buildings were located at the center of the city. The suburbs looked nice because there was a lot of forest around but above the center you could see the smog and we could smell it already and it got harder to breath. We cycled outside of the city and turned into mayor roads with more traffic and the fear came back.

After Zenica a mountain was waiting for us. It was still before noon but the sun was shining hot. There were a lot of ramps to take and it costed a lot of energy. Of course we needed a break from time to time, but there was also not that much shadow so we didn’t recover well. And of course the traffic also costed us some energy. However, finally we made it onto the top. After a short stop for a picture we cycled on. After a nice downhill segment we came to Dubravica where we had to turn on a big major street and the horror began.

An end with horror – even more traffic…

In terms of traffic and fear this was the highlight of the stage. The traffic was so dense and there were so much trucks we had to evade to grass verge several times otherwise a truck had hit us. After 10 km of constant terror we could turn into a street with less traffic but we still had no fun with cycling. At the next stop we booked a hotel at Novi Travnik which was just some kilometers to go. When we arrived our room was ready so we took a shower and went to a restaurant for a very good lunch. Afterwards we got us some supplies and rested in our room.