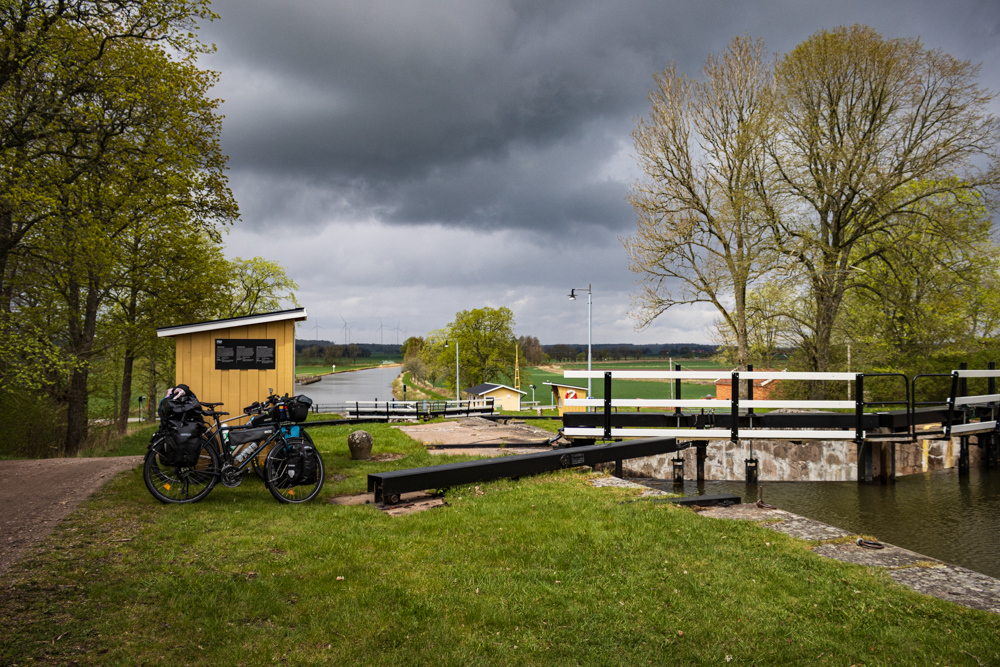 Found the Göta kanal! Just after the big rain shower.

On our two relax days in Mariestad we had mostly brilliant weather. Our camping ground was next to the Gamla Ekuddens nature reserve which is a famous spot among the local bird watchers. We could follow a path through this nature reserve leading us directly to the Marina of Mariestad. Next to the harbor was a small food court where we had lunch (also delicious vegan options!). After this we had a walk around the city with a short glance into the cathedral and ended up in a pizzeria. There we drunk some beers in the sun and enjoyed a pizza for dinner. Afterwards we bought some supplies at the supermarket.

The second day we started with cleaning our bikes. Alex had some problems with his gear shift so he tried to get it fixed at the local bike repair shop. Of course they were very busy, but the staff was really friendly and did the best he could to fix it. It worked better afterwards, but he could not exactly figure out what the problem was. However, it was good enough to continue the tour. Also we had a very delicious Fika at the Brödboden café in Mariestad. In the evening we had a lot of rain. After waiting for two hours chilling in the tent we decided to have late dinner at around 9 under our tarp.

At night there was still rain but when we woke up the rain stopped. Once in a while you could also see the sun, but it was mostly cloudy. So we started with breakfast and packed our bags. We hoped the tent and tarp would dry a bit during the preparation of our bicycles. The outer tent was still really wet, but we put it in an extra bag, so the other stuff could stay dry. Finally, we could start our stage. The sky was very cloudy again and looked really dark. We followed the Västgötaleden through Mariestad and some villages. First we drove on bicycle roads and than changed to minor roads were not much traffic was going on. After a while strong rain started but it did not last long. The route led us further through a forest area and we came to the Göta kanal by chance.

Following the Göta kanal and stop for nice lunch

At this point the weather started to get better and we had a bit of sunshine. After a short rest at a lock we decided to follow the bicycle path next to the canal. It should also bring us to our original goal – Karlsborg. After some kilometer along the Göta kanal we arrived at Töreboda. Along the shore at this town there was a little art exhibition which was quite interesting. Also we had our lunch stop at restaurant Krubb and ate a delicious green dish. In addition we checked our options. Karlsborg was quite far from there and the weather forecast was also bad. So we decided to follow the Göta kanal for another 10 km and stay there at a camping ground in Vassbacken.

Loosing the Göta kanal and finding it back…

Shortly after our rest the bicycle path crossed the canal via a small ferry. But on this day it was out of order. So we followed the minor roads for some kilometers and cycled again through remote farm land. Later we came back to the canal around three kilometers before our destination. When we arrived at the camping ground it began to rain (quite good timing). So we built up our base right before the rain got stronger. We had our place directly at the water front of the Göta kanal – really idyllic. Good for us that the camping ground had a warm kitchen where we ate our dinner and spent some hours (heating to the max 🔥). Due to the rain we went to bed a bit early but still tired.