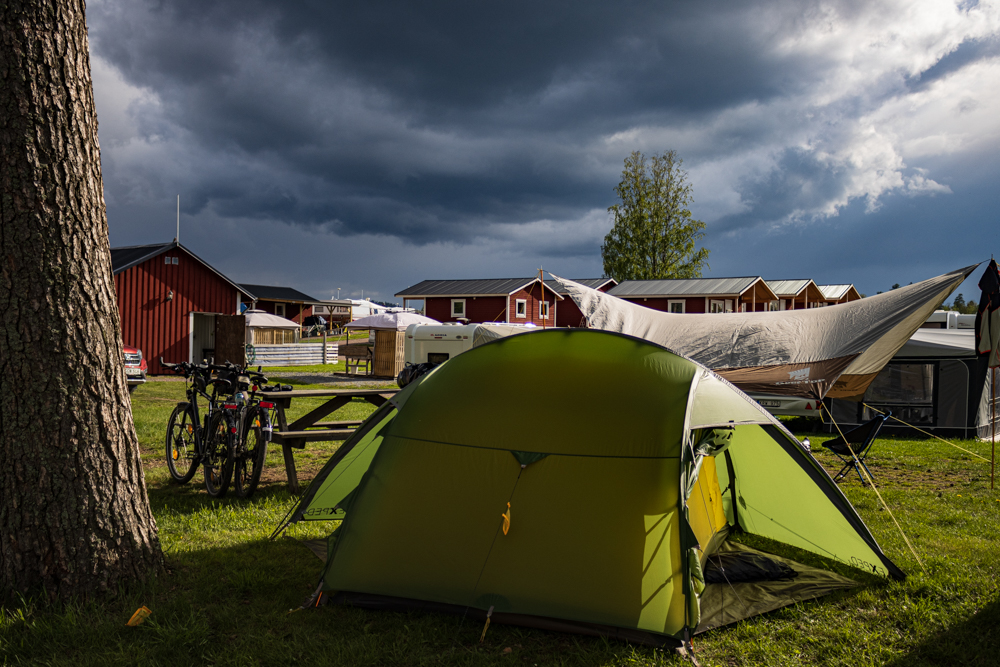 Tent and tarp are set at the campsite near Askersund - ready for the next rain...

In the morning of the day we spent in Vassbacken the sun was shining. The weather forecast was almost rain all day again, so we took the chance and cycled back to Töreboda and bought some food at supermarket (there was nothing close to the campsite…). Also we could see the part of the cycle path next to the Göta Kanal that we missed the day before. When we where back at the camping ground we had some Fika outside the café. But shortly after noon the rain started and we went inside and did some stuff at our notebooks. In the evening we had dinner in the kitchen. We used the oven for some broccoli wings and croquettes. In addition we had a salad. Very full we went to bed waiting for a rainy night.

In the morning we heard the rain drops on our tent. But we wanted to go further and not wait another day. So step by step we packed our bags and dissembled our tent and tarp. Like the last days before we had to be careful with the wet parts. But when we were done the rain also stopped. Our original plan was to follow the Göta Kanal, cycle around lake Viken and crossing Karlsborg and than heading north along the lake Vättern. But the staff at the camping ground warned us already upon arrival, that we had to take main roads with heavy traffic. He recommend us to take the north route because the streets there would not be so busy. So we did.

As expected the streets were almost empty. And we made great progress on this asphalted roads. Luckily there was no rain and we even had some sun once in a while. In this area there was almost only forest. So it was nice to ride, but there was not much to see. However, with the legs just pedaling on and on it was quite meditative.

After Undenäs we turned north in the direction of the small town Tived, where also the nationalpark Tivedens is located. On the way to the town heavy rain started. So we were happy when we came to the town in our wet clothes hoping for a warm rest in a café or restaurant. Too bad for us, that the restaurant and some other shops were closed (off season problems…). So we had to continue our tour and made a short break some kilometers later in a forest where we were badly protected from the rain, which got stronger again.

An old house just before Askersund

However, just some minutes later the rain stopped and the sun was shining (crazy weather in Sweden 🤔). We were still in a forest area but also a lot of lakes could be seen. The road became more demanding in terms of hilly. There were a lot of up and downs which included small steep ramps. It was almost like riding on a rollercoaster.

When we came closer to our goal we made a short detour by chance. A sign was promising a nearby attraction. So we discovered the Kullängsstugan, a wooden house build in 1693 and still standing. Even if it was under attack by a lot of ants when we came there it was fascinating to see such an old house in surprisingly good conditions and also learn a bit about the history.

A few kilometers before Askersund we had to take the main road into the city. A lot of traffic was going on and we were happy to survive it without being hit by a truck. When we entered Askersund we passed a Sibylla and of course took the chance for a vegan fast food meal. Two kilometers later we arrived at the camping ground. After we built up everything a short rain shower appeared (of course!), but after this the sun was shining again. So we could enjoy the sun next to the lake Vättern before we had dinner in the (unheated ❄️) kitchen and went to bed. The next two nights should be colder again – so we prepared ourselves for that.