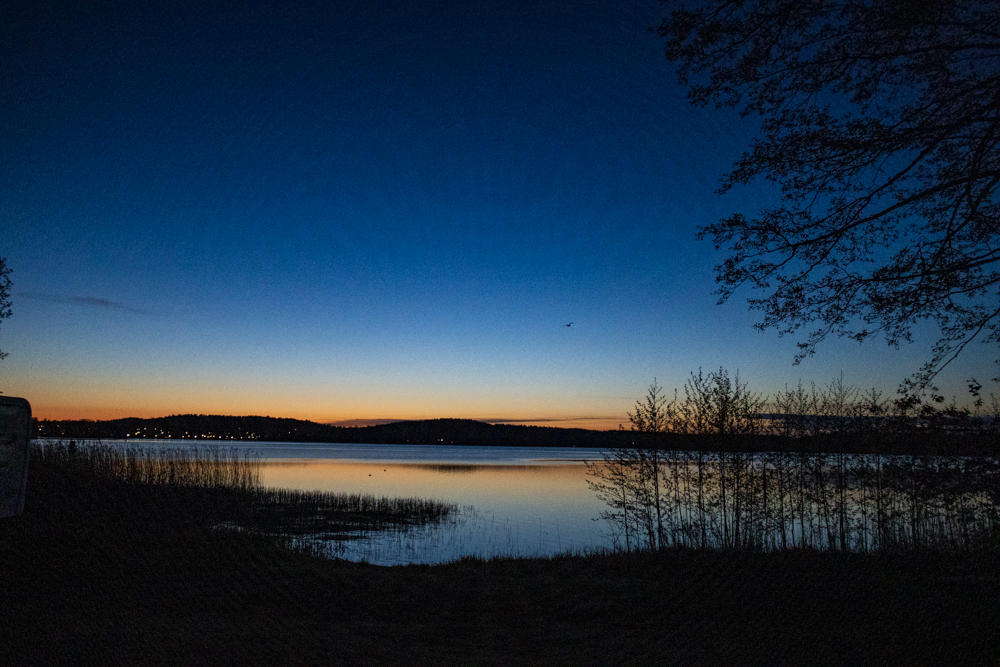 View over lake Vättern from the campsite in Askersund at 2:30 in the night.

After making laundry at our camping ground we explored the city of Askersund during perfect weather. The sun was shining and we had blue sky when we walked from our camping ground to the city. Our first stop was of course a chocolate café were we had a very delicious Fika. Alex would like to eat all of their sweets, so we had to leave before he went crazy. We walked around the harbor area, where we saw different cycling path signs, also for the Sverigeleden, which should lead us in the direction of Stockholm.

After the marina we could walk over a footbridge to the island “Borgmästarholmen” in front of the city. There we chilled at a little beach and watched a goose family. Afterwards we continued our walk around the city and ended up in a sushi restaurant. Again we had a delicious meal which felt almost like we were in Japan. Before we returned to the camping ground we went to the supermarket to buy some supplies for the next stage. In the evening we had dinner in the kitchen. Also a young solo cyclist from Germany arrived at the evening. We had a little chat before we went to bed.

Following the Sverigeleden for a while

In contrast to the last stages there was no rain in the morning. But it was a bit cold so it took us some time till we got everything ready and could start our tour. We wanted to cycle along the Mälaren to Stockholm. But from Askersund there we could not find a complete path to get to the Mälaren. The Sverigeleden should cover the first part of the tour but afterwards we would have to use our navigation. So we decided to use it from the beginning. As target we set the town Eskilstuna, although it were about 140 km and we were sure that we could not make it. However, along the route would be many camping grounds to choose from once we were tired.

After leaving Askersund we cycled on minor streets. So there was a bit of traffic going on, but it was fine for us. After some kilometers we made our first stop at the naturreservat Snavlunda. Till Vretstorp the area was mostly forest, after the village we entered an area with a lot of farmland. We followed the E20 in east direction on minor streets. So sometimes we had to deal with more traffic but most of the time we were at a remote areas.

As the sun was shining and temperatures rising also the nature around us looked more like summer. Lots of dandelion and rapeseed fields built a colourful environment to cycle in. Searching a spot for a snack we stopped at a little soccer field where also some benches were located. The following kilometers passed by very fast. It was nice to cycle, but there was not much to see. So we stopped again when we came to a beautiful nature spot near Norra Mossby at a nice lake (Kvarntorps outdoor area). Again a nature reserve with a lake and you could see a little mountain with ski lifts on it.

Leaving the Sverigeleden and passing a charred mystery

When we continued our tour we passed the remains of some burned vehicles. We asked ourselves what happened here but this might be a mystery for us forever. After a few more kilometers we had to turn on the Riksväg 52. This was a major street with a lot of traffic. So still we made good progress but it was sometimes a bit scary because of the heavy trucks. Suddenly we saw a cyclist sitting in the fields next to the street waving at us and we stopped. It turned out that he had a flat tire and no pump. So we helped him out, but he could not pump up his tire with our pumps. Too bad we could not help him, but he told us which route we could take to avoid the major street.

Holy lunch at the church in Askersby

With the good advise from the cyclist we turned to minor roads and the traffic decreased. Cycling was more fun and when we came to Askersby ans passed the church and a graveyard with a bench in front we decided to have our late lunch. Also we checkout where we could stay for the next two nights. Our goal was to go to a camping ground in Fiskeboda. Therefore, we had to switch back to the Riksväg 52 a few kilomeres later. In Odensbacken we took our last chance to stop at a supermarket and got supplies for the next two days. Back on the major street we stopped at a sights (happy for a short break from the high concentration on the busy street). It were the remains of farmland from the Celts 2000 years ago. A bit sad, that just a few meters next to it people had dumped their electronic waste into the nature. After a while we could leave the Riskväg 52 and follow minor roads for the last kilometers.

Our last pause we did at a rest stop next to the street with a beautiful view over lake Hjälmaren. Suddenly we were in a remote area again and there were not many houses around. When we arrived at the camping ground nobody was at the reception. So we had to make a call to got our place for the next two nights. The camspite was mainly used by permanent campers but had a free space directly at the waterfront a bit excluded from the other guests. The only other ones here was a German couple with their camper van which offered us a beer after we built up our stuff. This was exactly what we needed 🍻. After a friendly chat we made our dinner with rice and fish. In the evening we watched the sundown and went to bed very tired after this almost 100km stage.