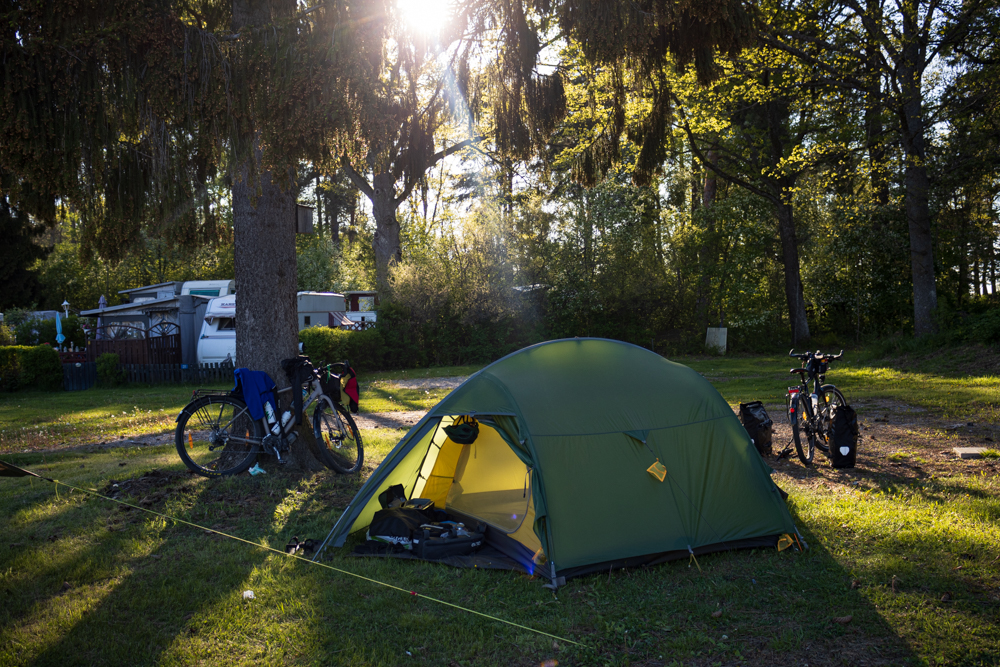 Our camping spot in Sundbyholm.

Alina woke up by a loud plastic sound – the crows where back! Just as in Japan they were looking for potatoe chips. And sadly we did not secure everything in the evening and they had success. Never leave plastic bags outside the tent…🙄

The camping ground in Fiskeboda was in a really remote area. There were no shops or restaurants nearby and on the camping ground were just a few permanent campers and the other German couple. So after our breakfast we had a little chat and then they continued their journey. We enjoyed the day with chilling and sunbathing on a veranda, and watching the lake. It was really nice to be in the nature that way. Alina had a (very short) swim in the ice cold 🥶 lake (swimming in a swedish lake = check!). Later we cooked some noodles and made a little walk around the area. With a small dinner before bedtime ended our day.

A cold start at Fiskeboda

A gray curtain covered the sky and the sun when we woke up. In addition, it was really cold. But the show must go on. So we froze a little bit during our breakfast. But when we were finished with disassembling our tent and packing the bags the temperature was quite nice for cycling. We wanted to cycle to the lake Mälaren. There is the so called Mälardalsleden which follows the coast of the lake to Stockholm. To get to the cycle path we navigated to a town which should be crossed by the cycle path.

After leaving the remote area of Fiskeboda we turned to a main road. We followed it for some kilometers and came to the first attraction of the day. The beautiful Julita Gård is a mansion with a big garden next to the small lake Öljaren. We did a little stop there and made some photos. Also we discovered the Näckrosleden cycle path there. This cycle path also leads to the Mälardalsleden, so we decided to follow this path. After a short track through some meadows the cycle path brought us to the Länsväg 214. There was a lot of traffic going on, so we were happy when the sign pointed to a minor street after a few kilometers.

We knew that we were taking a detour around the lake Näshultasjön. But it should be a more relaxed cycling than on main streets (at least in terms of traffic😬). And so the road led us into a forest area and the street became gravel. It were a lot of ups and downs and from time to time you got really beautiful views of the lake. We hardly met anyone and really enjoyed the silence, only interrupted by the nice chirping of birds. Along the lake was also again a nature rerserve located. We liked cycling in this area although we did not make fast progress. When we left the lake we came to a sign of the Mälardalsleden cycle path which we would follow from now on. Once in a while it also again crossed the Näckrosleden.

The versatile area of Eskilstuna

We were back on asphalted streets but there was not much traffic. So we were a little bit faster and cycling was still fun. In Hållsta we missed a sign and cycled for some kilometers on Länsväg 214 again, but than rediscovered the path and arrived in Eskilstuna on minor streets. This is the biggest city in the area and also had some really beautiful spots. At a restaurant directly in the city we had a delicious late lunch and planned the rest of the stage. We found a camping ground nearby in a remote area. So we had to make a stop at a supermarket before.

An unpleasant surprise at the campsite in Sundbyholm

The supermarket was really big so Alex needed some time to get everything we wanted. We loaded our bikes with the supplies and started our last 10km. It was beautiful weather and almost too hot. We cycled on minor roads and could enjoy the surroundings. When we came to the camping ground and wanted to build up our tent we made an unpleasant surprise. The chain cleaner can in Alex’s bag broke and got the tent and some other stuff dirty. We tried to clean the things but there were still stains. We hoped that the damage is not too bad and built up everything. In the evening it got really cold. However, we had dinner with rice and fish under the tarp. We were happy when everything was ready and we could go into our warm bed 🥱😴. Interesting and versatile bird sounds accompanied us while getting into sleep.