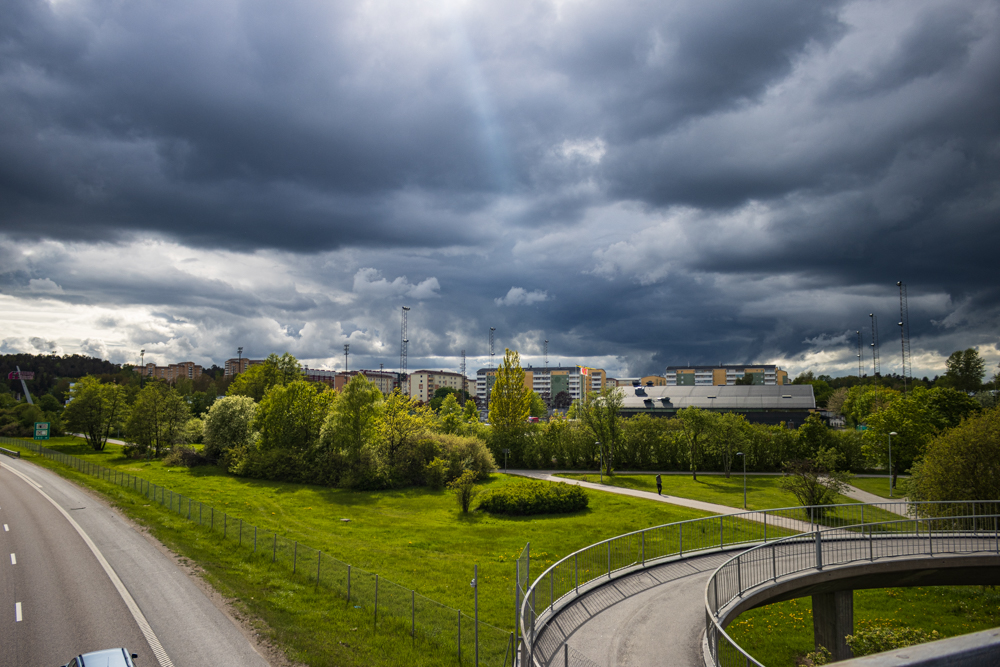 Dark sky over some suburban area of Stockholm.

After our late breakfast in the sunshine Alex tried to clean some stuff from the broken chain cleaner. Then we were ready to explore a little bit of the surroundings. Near the camping ground was the longest sand beach of the Mälaren, but first we had a little snack at a small café next to the marina. After our walk along the beach (searching for the majestic sea eagle living here) we saw a sign for another attraction. Just around 3 km far we could marvel at over 1000 year old stone carvings. The “Sigurd Carving” tells a story of warriors, gold and providence.

After our visit, we followed a hiking trail, which led along the trotting course stadium of Sundbyholm. Sadly all racings for the day were finished. From there we could easily go back to the camping site. Before dinner we planned our next stages. We wanted to go to Stockholm the next day, even if it would be more than 130 km. But the weather forecast was quite bad and we did no longer want to stay at lake Mälaren in heavy rain. So we booked our accommodation, made some rice with vegetables and went to bed early so we would be ready for tomorrows stage.

A foggy morning at lake Mälaren

After waking up we went to the kitchen and had our breakfast there. It was 5 in the morning so still a bit cold, but it was bearable in a warm kitchen. When we were finished we packed the bags and dissembled tent and tarp. It was still really wet, but we hoped that we could dry it our apartment in the evening. The next sign of the Mälardalsleden was in front of our camping ground and led us on minor roads through a forest. The small villages we passed were shrouded in mist. It was quite early on a Sunday morning so we did see more rabbits and birds than human beings.

Along lake Mälaren to Strängnäs

The area and the weather did not change much until we came to the city of Strängnäs. There we had a little break near the harbor. We knew the Mälardalsleden leads to Stockholm, but of course it is not the shortest route. So we decided to use the navigation from now on and maybe switch from time to time to the Mälardalsleden when it was more convenient. So we left the city on bicycle path next to the main city.

After a while we came closer to the highway E20 which leads to Stockholm. A street we would meet again and again till we got to Stockholm. After a short break at a really nasty public toilette at a train station in Mariefred we followed minor roads for kilometers. The weather was not really nice and also the areas had not much to offer. However, at least we made great progress. After crossing a street Alex´s tire lost some air. It was definitely visible that something was not alright, but it was a very busy road. Therefore, we just pumped up the tire and hoped it would last for some time. A few kilometers later we left the main road and turned to the Mälardalsleden on minor roads. Alex´s tire did not look too bad so we still continued the tour.

After some more kilometers we could turn on a bicycle highway near Nykavrn. It was a perfect small asphalted road for pedestrian and cyclists. It led us through a forest area and along the lake Måsnaren. After a photo stop we recognized that Alex tire lost air again. The next city Geneta was not that far away. We decided to cycle there, and change the tire during our late lunch break. We came to a big business area and a Burger King restaurant with plant based burger advertisement. So we decided to go there. Alina fetched the food and Alex started to repair the tire at the parking lot. Under the interested eyes of the Burger King staff changing of the tire was not that big deal. After we ate our plant based burgers and some fries we continued our tour.

Ups and downs in Södertälje along lake Mälaren

It was afternoon and got quite hot meanwhile. We passed through the city of Södertälje. A really big city where we came across a lot of multi-storey apartment blocks. After all the remote nature we had seen in the last weeks this was quite of a reality shock. We crossed the Mälaren there on a big bridge, where we could also see a building of one of the famous companies of these times – AstraZeneca. After leaving the city we came back into a forest area. There we passed a lot of nature reserves. Obviously these streets were very popular among racing cyclist. We saw a lot of them and of course everyone who cycled in our direction overtook us. They were very fast and looked liked they were very motivated.

Finally, we entered the greater area of Stockholm. First we cycled through some neighborhoods with smaller houses. It was still okay to cycle, but a bit later we cycled near major roads. Even if there were bicycle roads, the partly confusing traffic and all the noise were quite stressful. However, the good thing was that we also cycled through some parks and due to this could make our last pause in the Storängsparken. We also informed our host that we might be at the apartment in one hour because there were “just” 15 km left.

The last kilometers are the hardest ones

Shortly after the break we cycled along Mälaren in the Årstaskogen naturreservat. We did not expect a gravel road with these steep ups and downs almost in the center of the city. After already over 100 km we were very tired and these ups and downs were very challenging. But we survived it. After some kilometers in the crowded city we got lost again (nerves already a bit tense🤯). Near the Hammarbytoppen (a tiny ski area within the city of Stockholm) we got confused because of construction and could not figure out the right redirection sign for us (still not fluent in swedish…). We would have this problem a few more times over the last kilometers. But finally we arrived at our apartment in the small suburban area of Saltsjö-Boo. Our lovely host explained us everything and we were just relieved.

In the apartment we had to unpack some stuff and got it ready for drying. So we built up the tent on the terrace, cleaned it from all the pollen dust, dead insects etc. and put the inner tent in warm apartment to fully dry. After a warm shower we ordered some pizza and were just happy that we finished this stage with more than 130 km.