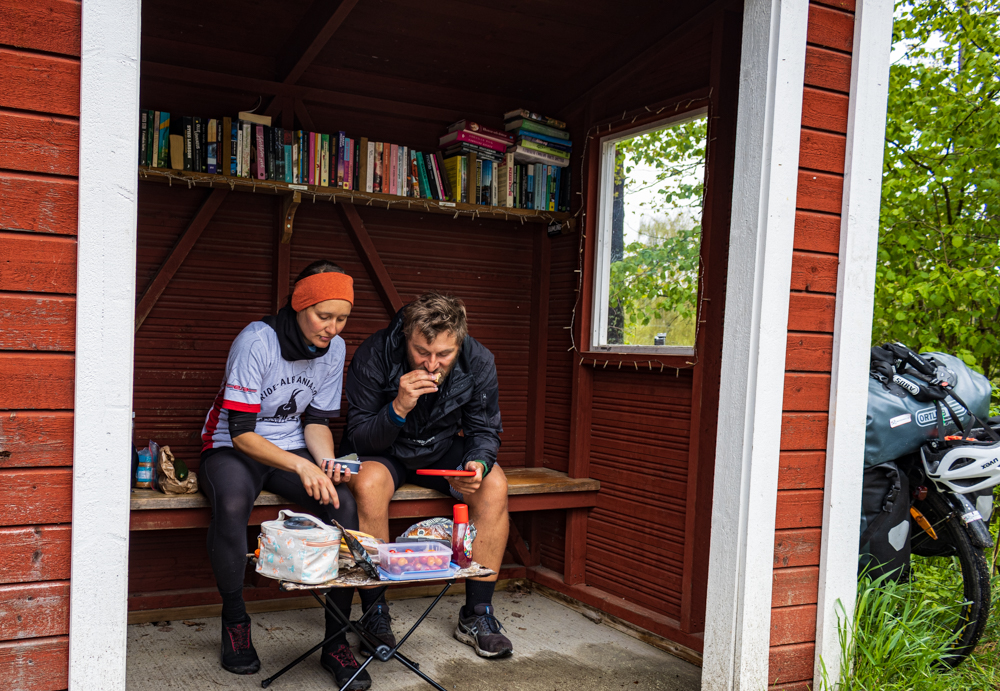 Lunch at the library bus stop on the way to Nynäshamn.

In Stockholm we stayed for four days. On the first day we had to relax to recover from the tour before. Alex had still problems with the shift gear and tried to get it fixed at a bicycle repair shop but had no luck. So he had to postpone the repair. On the second day we explored Stockholm (it was the only day with no rain in the forecast). We took the bus to Slussen and started from there to walk around the city. We passed the palace of Stockholm which was closed due to the pandemic. Than we had a Fika at a small vegan café. Sadly they didn´t have Kanelbullar there.

We continued our walk in the city and stopped by the Storkyrkan. We were the only visitors at that time in the church. Afterwards we walked to the Vasa museum. The Vasa was a ship from the 17th century which sunk after 15 minutes of it’s maiden voyage in the harbor of Stockholm. It was recovered 333 years later and is now preserved in the museum. 98% of the ship is still original. It was fascinating to learn about the fate of the Vasa and not many people were there (thanks Corona 😉). To finish our tour we had a delicious dinner in an Asian fusion restaurant with lots of vegan dishes.

The last two days in Stockholm it rained a lot. So we took the time to plan the next steps of our tour and finished a little video of our previous stages at our apartment. After two months we thought that it was time to leave Sweden. The easiest way to continue our tour was to go to Poland. Therefore, we needed to make an appointment for an antigen test which took us some time but we finally got it done. The ferry to Poland starts at Nynäshamn so we booked an apartment there. And of course we booked the ferry itself. So the goal for our last stage in Sweden was fixed.

Back through the busy city of Stockholm

After two days of constant rain we were glad that it did not rain in the morning of the last stage in Sweden. So after breakfast we packed our stuff and prepared the bicycles. After a friendly little chat with the host it was time to start the stage. The first kilometers were quite familiar to us because we had to leave the city like we entered it. The area was crowded, the sky just gray and so our motivation was not the best. To got to Nynäshamn we wanted to cycle the Nynäsleden. When we finally turned onto it we left Stockholm a bit behind and cycling started to get more pleasant.

Lunch with literature in the bus stop shelter

We still passed through some smaller towns and had to follow a major road after Lanna. Some heavy trucks were also driving there. We were happy when the Nynäsleden led us to minor streets and we did not have to be constantly focused on the traffic behind us. After some time we came to Östrop and took the chance in a cozy bus stop to have some lunch. Meanwhile the weather got better and we could finally see the sun and some blue sky. Afte the stop we cycled for the next kilometers through a remote forest area where only some tiny villages were located. With a lot of small hills cycling was quite fun.

Arriving in Nynäshamn – the port of Stockholm – with sunshine

When we came closer to Nynäshamn our cycle path was next to the major roads of the area. But not that much traffic was going on and most of the time there was a bicycle lane. So we had beautiful weather when we entered the city and were quite early for an 80 km stage. After our very friendly and lovely host Terry welcomed us and showed us everything we needed around the house, we had a shower and took a walk around the city. We stopped at a Thai restaurant for a nice veggie dinner and continued our tour to the harbor. In the evening when the sun went down it got cold and we returned back to our apartment.

On our first day in Nynäshamn we checked out the beach and went down to Queens bay. It was beautiful sunny but the air was still quite fresh. So we did not have a bath in the ice cold water ❄️. Instead we walked further until Lövhagen and had a nice Fika. In the evening we cooked in our cozy accomodation and went to bed early.

Lovely trip to the island Öja

Being for quite some time in Nynäshman we decided to take also the opportunity to visit the surroundings. Our host Terry had some advices in a binder in our room. So we chose to go to Landsort on the island Öja very south from Nynnäshamn.

The trip was just a 30 minutes bus drive and a 20 minutes ferry ride away. But our host was so kind to drive us to the port on his own. So we also got to enjoy some more informations about the history of the local area. The ferry trip itself and the island were stunning. The remote nature, stony landscape with forest and beautiful seaviews – it was definitly a good choice to go there. We took the morning ferry for the way there and had time till past 5 to take the ferry back. The weather was totally perfect – sunshine and a little breeze. In the evening we finished our Sabbatical part in Sweden with a nice Sushi dinner and went to bed early.