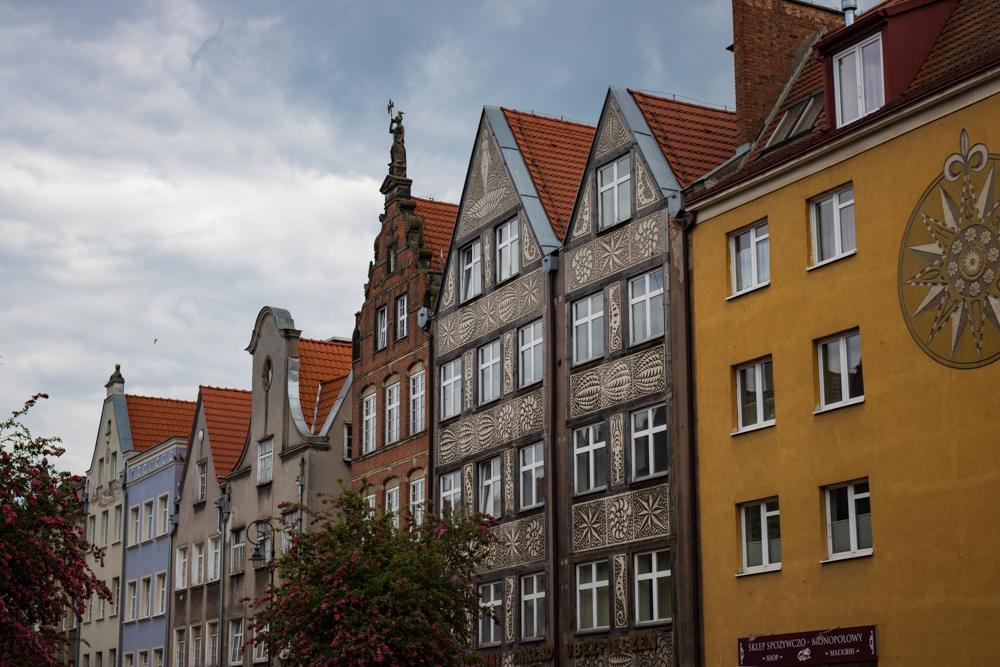 For the ferry in the evening to Gdańsk we needed a negative Covid Test. Therefore we took a train to Stockholm as we had an appointment there for a test. Without any problems we got there and the test took only a few minutes. Before we took the train home we had lunch at a MAX fast food restaurant. Meanwhile we got our results which were negative. Back in Nynäshamn we prepared our bikes and said goodbye to our wonderful host Terry. We were pretty early for the ferry but we weren’t in the mood to go the harbor so we had some beers in front of the gates of the ferry port until it opened. Our cabin was inside without any windows so at night it was a bit spooky not to see anything and just feel the swaying.

The 18 hours on the ferry past by fast and around noon we saw the shores of Gdańsk. When you arrive at the harbor you mostly see industrial complexes, but you can also see the promenade. Our way to the camping ground was short but our navigation was not up to date so we took a little detour. Check-in was also easy and after we built up our tent and tarp we recognized the warmth of Poland. In the evening Alex tried his luck at the next bike repair shop because he still had shifting problems. He went to “house of bikes“. They were fully booked out but one of the staff had a look at the bike. And just some minutes and a bit of adjustments later everything worked well again. These guys were just amazing. So this was a perfect start in Poland.

On the second day in Poland it was time to explore the city of Gdańsk. After we figured out how to buy a ticket without any cash and also no ticket machines we used the tram to go into the city. We had perfect weather and it was just fun to walk around and enjoy the city. Gdańsk is just beautiful and has so many nice colorful buildings. Most of the city was destroyed during the second World War but you see many nice restorative buildings and also some brand new projects. We visited the impressive St. Mary´s church with a huge collection of old sculptures, paintings and relicts. After a delicious late lunch at a vegan restaurant we went back to the camping place. Before dinner we had to go to the supermarket because the next day was national holiday. So of course we had a little snack before going to bed.

On the day before our next stage we had to take care of our bicycles. They were still very dirty form our wet and muddy tours in Sweden. Also we had to make some laundry. After we finished everything we enjoyed some hours at the sun. Next to the camping ground was the beach so we took the chance. You did not see many people in the sea. It was still warm on land but maybe the water was still cold so we did not try to swim there. In the evening we did some stuff at our laptops and during this the camping ground got very crowded. It seemed to be that many polish people want to enjoy the national holiday.

It was a warm morning when we wanted to start our next stage. We weren’t used to such high temperatures during the tour before, but sure we liked it when you could step out the tent in short clothes. After breakfast we got everything ready and could start the ride. We wanted to follow the Eurovelo 9 which would lead us south wise through Poland. So we navigated to a nearby town where the Eurovelo 9 should be. From the camping ground we passed through the suburbans of Gdańsk. It was nice to cycle because most of the time there was an extra cycle path. Not many kilometers afterwards we saw the first sign of the Eurovelo 9 and we followed it.

At a crossing we got a little lost but a group of cyclists helped us out and got us back on track. At least one of them spoke good English and was also interested in our adventure. Some kilometers later an older couple was also curious about us but communication was difficult without talking the same language. However, you felt the friendliness and curiosity of the Polish people. Our road led us through some smaller towns till we came to the river Wisła. This area was more remote. We did see a few villages and there was much farm land. After a while our cycle path ended and we turned to a minor road.

Getting lost in Poland

From time to time we passed some avenues which spent nice shadow on this very sunny day. After some time we did not see any further Eurovelo sign and checked the map. We were cycling in the wrong direction for 3 kilometers, so we had to cycle back. From this on we used our navigation to the next city were the Eurovelo 9 will pass by. From time to time we also followed the signs when we found them. There was not much to see in this area but on the minor streets we made great progress. Also everything was almost flat land which made cycling not too hard. When we came to Nowy Staw we stopped at a pizza restaurant and had a late lunch. Also here it was difficult to order because of the language barrier. Besides the weather the biggest change in contrast to Sweden. We also decided to end our stage at Malbork the next big city.

On the last kilometers there was mostly a cycle path but still on the roads was not much traffic. When we entered Malbork we first saw the big castle “Zamek w Malborku“. However, first we had to go to the camping ground and build up our camp. After a shower we had a little walk in the city and of course stopped by the castle for some photos. We ended our walk at a local open air pub (Sklepy Cynamonowe) and had two beers. Afterwards we went back to the camping ground, had a little dinner and went to bed very tired. There was a big kid´s birthday party going on at the campsite, so we had to wait until the noise got less. After the party music stopped, the toads at the river began their concert.