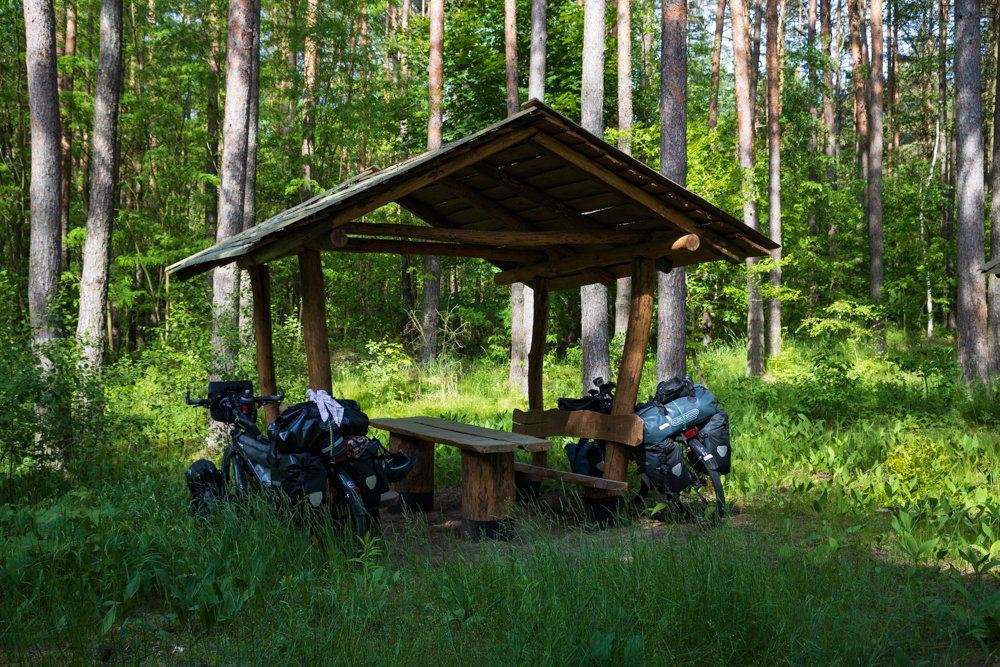 Our bikes at a resting place in a nice forest some kilometers before Grudziądz.

On our rest day in Malbork we decided to sleep long. After breakfast we did some stuff on our notebooks which was a bit difficult due to the bad wifi and also our mobile data connection. Next to the camping ground was a football field. Alex watched a game of the local club TP Nogat Malbork. They were down by 1-0 when he left the field ten minutes before the end.

In Malbork we wanted to take an audio guide tour in the castle. But before that we ate a tornato potato at a small market in front of the castle. Afterwards we went to an open air pub and had some delicious polish dumplings. Than we could start our tour at the castle. It was very interesting and we got some nice views from the inside. The castle was built by the “Teutonic Order” in the 13th century and was improved over the centuries. It is the biggest brick building of the world. A lot was damaged in the end of World War II, so the reconstruction happened until the 1960s. When we finished our tour we had a little dinner near our tent and went to bed quite early.

For the next stage we woke up early because we wanted to avoid the afternoon heat and finish early. The plan was not executed very well 😝 since our bicycles weren´t ready until around 9. After leaving Malbork we had one last view of the beautiful castle and than followed the street “Droga krajowa 55” south wise. It was the recommended path to get back on the Eurovelo 9. After some kilometers there was no bicycle path left and we had to cycle on the main road. It was very busy and also some trucks were on the road. So we decided to use our navigation system.

This led us through minor roads and shortly after also to forest paths. It was a really nice area to cycle and also the trees spent good protection against the hot sun. From time to time the path was very sandy which was difficult to cycle. After some kilometers we came to a little village and not far from that we were back at the river Wisła. It was time for a short stop and enjoy the view. Also we were back on the Eurovelo (which was also the European bicycle path R1).

Following the river Wisła to a fantastic lunch

We followed the river on minor roads. There were not much traffic going on. It was a very remote area where only some very small villages appeared. In addition, it was very flat and we could see for miles. Most of the area was farm land so there were no trees which could protect us against the sun. When we came to Kwidzyn we decided it was time for lunch. So we had a fantastic meal at the Bordo restaurant with fish, salad and veggie dumplings. It was early afternoon and really hot but after finishing our meal we decided to continue our stage because we had some kilometers to cycle.

Flat land and many storks on the way to Grudziądz

We still could follow minor roads with less traffic. The area did not change much but we made good progress due to the good streets. Along the way we saw a lot of stork nests. Also every village seems to have some religious spot with flowers, decorations and some holy figure. Our last break we made at a resting place in a forest. After many kilometers this was the first place which offered some shadow. When we came closer to Grudziądz we lost track of the Eurovelo. So we turned on major streets which were very busy. The camping ground we wanted to go was south of the city. So we did not have to cycle directely through the city. After building up our tent we went to the nearby restaurant and celebrated the end of the stage with a little dinner and some big beers. Again communication with the staff was a bit difficult but in the end also funny 😁.