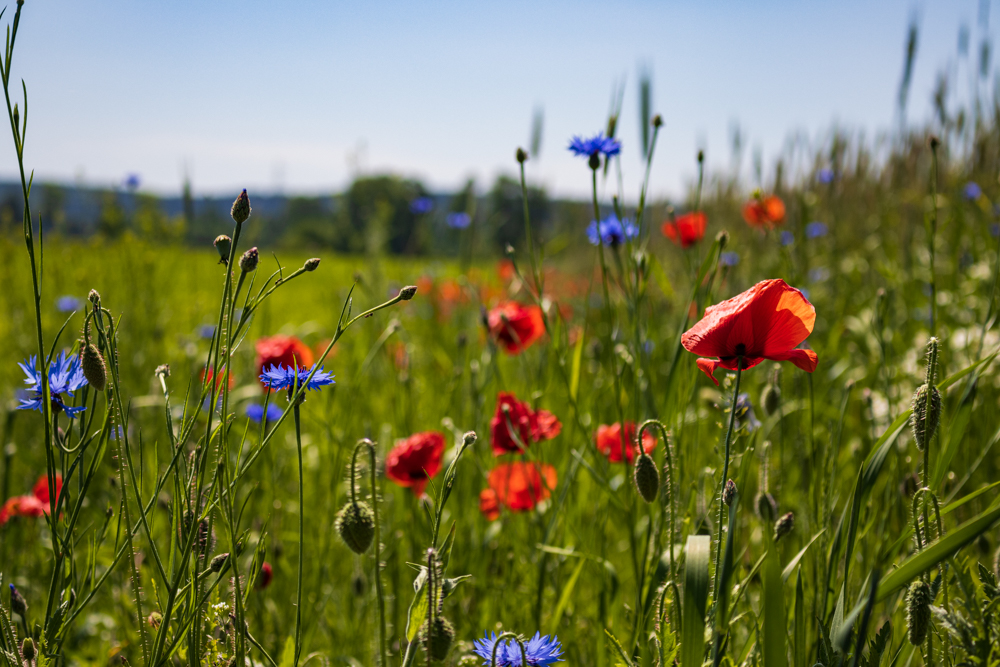 Colourful poland - so many flowers along the way from Grudziądz to Bydgoszcz.

On our rest day in Grudziądz the sun was shining very hot. But on our camping ground were a lot of trees which protected us from the heat. After breakfast we wanted to go into the city. The camping ground was around 6 km far from the center and we did not want to use our bicycles. But there was a bus stop nearby. The problem was how to purchase tickets. After research it is not possible to buy on the bus and there was also no ticket machine nearby. So we asked the staff at the reception to order us a taxi. This went surprisingly well and costed 20 Złoty (around 5 Euros) which was not too bad.

We took a walk around the center and along the river Wisła. The center has some historical buildings and from the top of a reconstructed tower we had a stunning view of the city and its surroundings. But it was so hot that we decided to buy our necessary supplies and relax for the rest of the day at the little lake next to our camping ground. We also had a little swim in the still quite cold water.

For this stage we wanted to cycle to Bydgoszcz which is south of Grudziądz along the river Wisła. So we had to cycle around the little lake to get back to the cycling road next to the river. We used our navigation system which led us through the Delfin Beach. Alex ignored the bicycles forbidden sign and not short after a grumpy man calls on us to return. So we did and had a little detour through a sandy forest road. After some kilometers we left the suburbans of Grudziądz and cycled on the „Wisłana Trasa Rowerowa”.

In the area which we entered were some small villages located and a lot of farm land. That means there were not much trees which could protect us from the sun. But one had nice views on the fields which appeared in different colors. The road was also in very good conditions so we made good progress. After some time we passed the city Chełmno where we made a photo stop. After the city our road led us throw a forest which we highly appreciated due its cooling effect.

But also this forest ended sometime and we were back on open road. Next to the fields you saw a lot of poppy flowers which shined in a rich red. Our next stop we made at a viewpoint. There was a little tower with a view above the river Wisła. A sign with information was broken and also the tower was victim of vandalism. So we took some photos and continued our stage. After some more kilometers on minor streets we came back again into a forest. The path alternated between gravel and forest path. It was a bit challenging but after some kilometers we were back on minor streets.

Industrial flair at the campsite in Bydgoszcz

When we came closer to our goal Bydgoszcz the streets got more busy. Most of the time there were bicycles roads but we had to cross major roads from time to time. Before entering the city we crossed a big bridge over the Wisła. An interested polish cyclist wanted to know where we were going. Also he explained that he wants to cycle with his bicycle from Poland to Portugal this year. We said goodbye in a friendly way and wished each other a good trip, hopefully he would make it to Portugal.

We finished our stage quite early so we decided after building up tent and tarp to go to the city. Again it was a little bit difficult because we wanted to go via tram and we had no tickets. We read you could not buy tickets in every tram and there is no app, so we walked two kilometers to the next big station through the heat. In the city we visited the beautiful and idyllic “Mill Island” and took a little walk around the old town. The city had much to offer and looked really nice. We had a delicious vegan dinner at an Indian restaurant. Afterwards we bought some supplies at the supermarket and went to the camping ground quite tired.