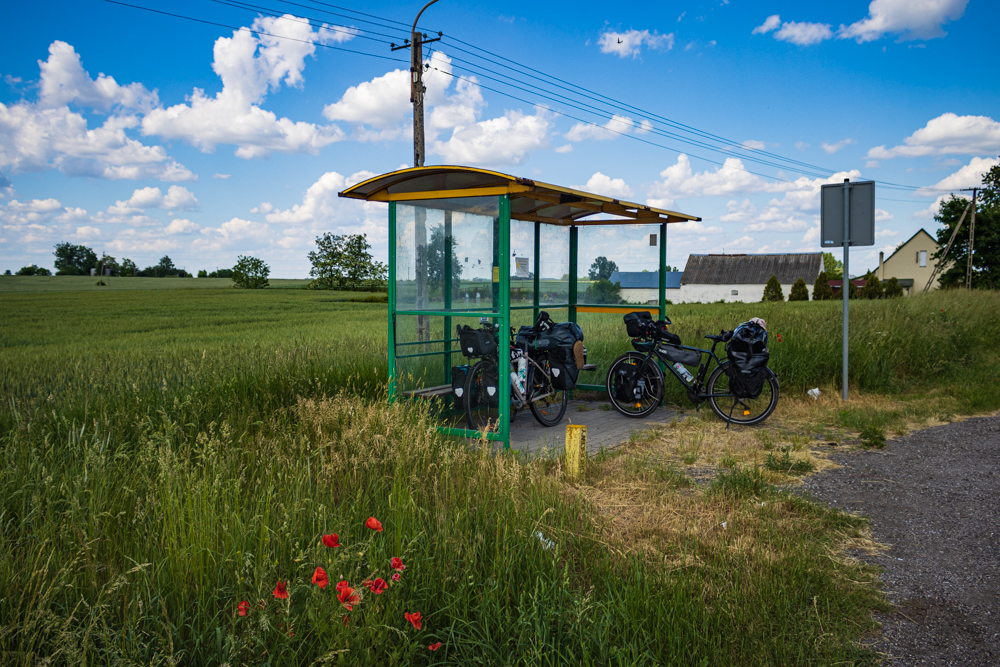 Break at the bus stop along the busy main road.

On our rest day in Bydgoszcz we relaxed at the camping ground. There were just two other people, after two German couples left with their camper in the morning. The camping ground was pretty nice but located in an industrial area which causes some noise. Nevertheless, we could enjoy the sun.

Also included was the use of kayaks for free. The owner told us it would be just six kilometers to the city and 400 km to Berlin 🤣. We had almost no experience so we watched some youtube tutorials and gave it a shot. It was quite intense and challenging and of course we did not make it to the city 😅. But still we could enjoy the river Brda and also watch some birds really close. Also on the plus side nobody fell into the river and we had no incidents with other boats. So it was a lot of fun. After dinner and some video games on the notebook we went to bed.

Wagrowiec – half way to Poznań

Our next milestone of the tour was the city Poznań. But it was more than 140 km and we did not want to cycle this on one day. So we searched for a camping ground between Bydgoszcz and Poznań. We found “Camping nr 177” at Wągrowiec. We could not find an official bicycle road to the city, so we used our navigation. For the first kilometers we had to cross the city of Bydgoszcs from east to west. We thought this would be the hardest part but this was a bit naive as we realized at the end of the stage. In fact, cycling in the city was not too bad. We often could use cycling roads but did not pass many attractions. After we passed the airport we left the city behind.

Fighting heavy traffic on the way to Wągrowiec

From then on we followed a major road. There was a cycle path nearby so we could drive peacefully but there was a lot of traffic going on. After a while we came to a big intersection with Expressway S10. There were a lot of construction going on so our navigation could not figure out the right way. We could avoid the major street for some kilometers but then we had to turn on the major street sometime. Due to the road construction in this area there was a lot of traffic going on including heavy trucks. Cycling there was a bit of a fight and also mental challenging when those big trucks pass you by with less than one meter. However, after endlessly seeming kilometers we came to the town Szubin and could turn to a minor road.

Lunch at the bus stop next to the “country highway”

This was the first bigger town after Bydgoszcz so we went to a supermarket and bought us our lunch. We continued our tour and hoped we would find a nice spot for lunch. After some time we had to turn on the main road again and the traffic got a bit more. When we came to a bus stop in the middle of nowhere we took the chance for our lunch. It felt like the first time on this stage we could also have a look at the nature and not being foused on the traffic and road. There was a lot of farm land and also some forests. The area was mostly flat and we had not much to climb. Even if there was no spectacular nature, you could enjoy nature if you could ignore the noise of the traffic.

We followed this major road for many kilometers. From time to time the traffic increased and we had to deal with heavy trucks again. But the streets were in very good condition so we made great progress. We made a final stop again at a bus stops to regain some energy. A few kilometers later we could leave the main road and turn into small streets. The last three kilometers led us through a forest and then we arrived at our camping ground in Wągrowiec next to a big sport park. There was just one other camper so we had the almost perfect facilities just for us. When our camp was ready we got some food at the next supermarket and celebrated the end of the stage with dinner and some beers.