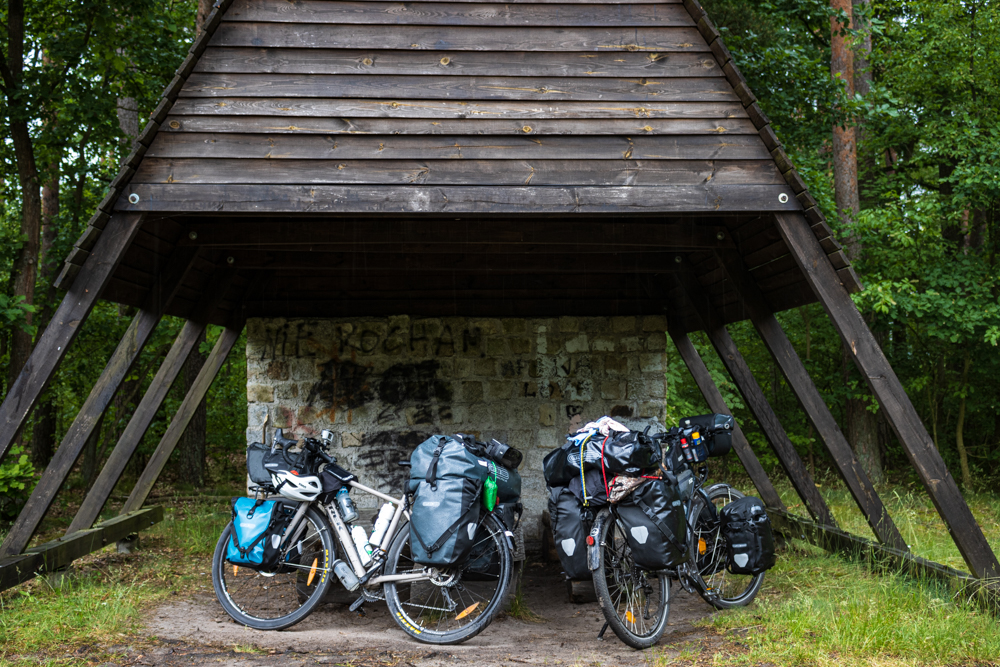 Snack stop in the forest - good shelter for the coming rain.

Wągrowiec is the smallest town we have been so far in Poland. But still it had something to offer. So we took a walk around the area. Right behind the sport park led a path to a small lake. Not far from there was a little promenade where you could rent pedal boats. But we continued our tour to the city center. We passed a memorial for the Jewish community whose last representatives fled in the second world war. The remains of the previous cemetery had been exhibited.

After this we passed the main place of the city and continued our tour to the river crossing (Bifurcation). It is a very rare natural phenomenon where two rivers cross each other without the waters mixing. Afterwards we went back to the camping place to make some tent cleaning. In the evening we had a delicious vegan dinner at the restaurant RejaNo 1. Also there was a private party going on at the camping ground. Good for us that the party of the youngsters ended around 11 (after some other campers yelled at them for being way to load) so we could catch enough sleep.

Straight out of Wągrowiec in the direction of Poznań

For our next stage we wanted to avoid the major roads around this area, so Alina did some research for minor streets and got the navigation ready. When we left Wągrowiec behind we followed a long straight street. There was not much traffic going on and also most of the time we could use a bicycle road. It was also the first day in Poland when we had a cloudy sky and not much sunshine. So we didn´t have to fear some sunburn on the plus side. The street was mostly asphalted but when we entered a forest it was for some kilometers an unpaved road. And of course we passed a religious statue in the middle of the forest.

Snack time in the forest

After the little town Skoki we had to turn to the major road. There was not as much traffic as on our last stage but we where happy when we could leave the road again and continue cycling on minor streets after Łopuchowo. Shortly after it started to rain we took the chance to got some protection in a little shelter. Also it was time for some snacks. Afterwards we continued our stage in rain clothes. But the rain did not last long and was also not too heavy. We could follow cycle paths for a while but when we entered the suburbans of Poznań cycling was a bit more challenging.

Searching for cycle paths in Poznań

Often we had to use small sidewalks and the traffic also got heavier. In addition, there were also some road constructions going on what made navigation difficult. However, when we came closer to the center of Poznań there were more cycle paths. The city was busy and there were a lot of people walking around. We passed the main Station Poznań Główny and a few kilometers later we arrived at our goal. Due to Alinas birthday we decided that after two weeks of camping it was time for a comfortable room in a hotel so that we could relax more. Also the bikes could relax – the hotel offered us a conference room to store them safely. In the evening we had a nice dinner at the restaurant in the hotel.