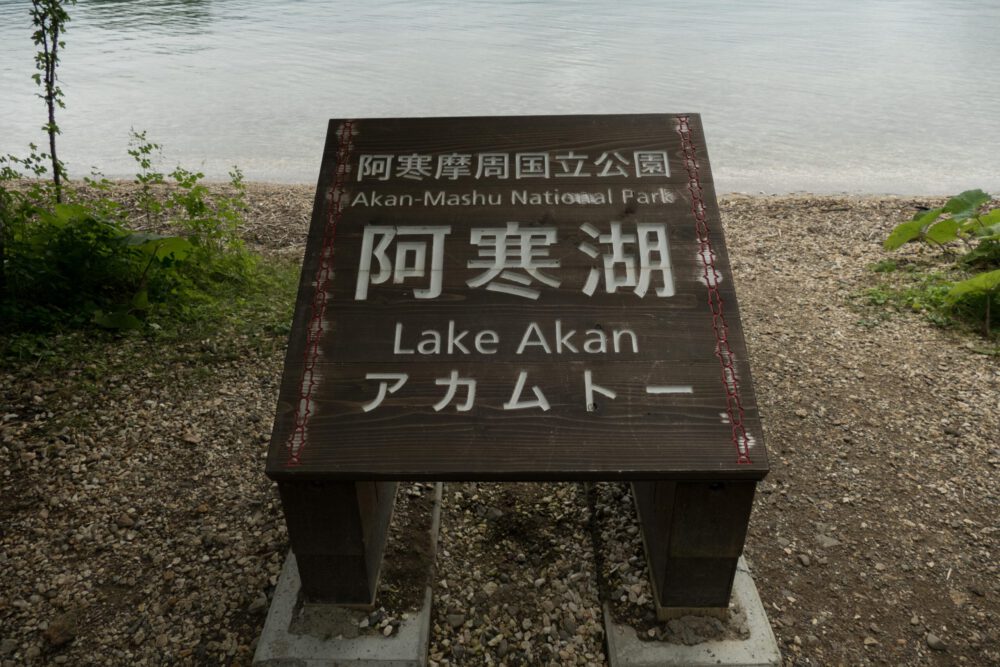 Lake Akan sign at the round course of the lake. Part of Akan-Mashu National Park.

We started early from the Chimikeppu Campground accompanied by light rain. Leaving Lake Chimikeppu behind us we started into the direction of Akanko with the famous Lake Akan. We knew the distance would not be so long but there would be one pass just before the end of the tour (around 50 km in total).

Thus, alomst halfway to lake Akan we stopped by at the Aioi Railway Park to get some energy. Next to the park was a little shop where could buy some delicious food for our lunch time. This included little baked bear cakes filled with vanilla cream – sooo good! Actually so good, that they were eaten before we took a photo of them… There were also some benches outside, so we relaxed a bit and studied a map from the surrounding activities. We also took the chance to have a look at the historical train stration at the park.

We knew it would come but indeed the last part of the stage to Lake Akan was tougher then we imagined before. We had to a lot of climbing to beat the Senpoku Pass which was the highest point of that stage. But finally we arrived in Akanko a small town next to Lake Akan. In this town do live a lot of Ainu people, which are the original inhabitants of Hokkaido. They show their craftsmanship in many small shops.

The camping ground was just before the city of Akanko and it was not really busy so we got a good spot for our tent. Besides the Ainu culture, the town is very famous or onsen, hiking and the Marimo algea. The latter one is also imitated in a special cocktail you can get in many bars there.

Relaxing and culture in Akanko

Relaxing at the camping ground was not so easy as we had many crows as visitors. They spotted our food and were very creative to steal it (e.g. a closed bag of chips and a plastic bag from one of our bikes…). So we flew to the wonderful rooftop onsen and bath on Hotel Tsuruga. Stunning views included. In the evening we got the chance to join a cultural event Kamuy Lumina starting that day. This included a highly impressive light show guided way around a part of the Lake. The topic was an old story from the Ainu about an owl and the spirits of the forest (mainly in japanese but still fascinating).