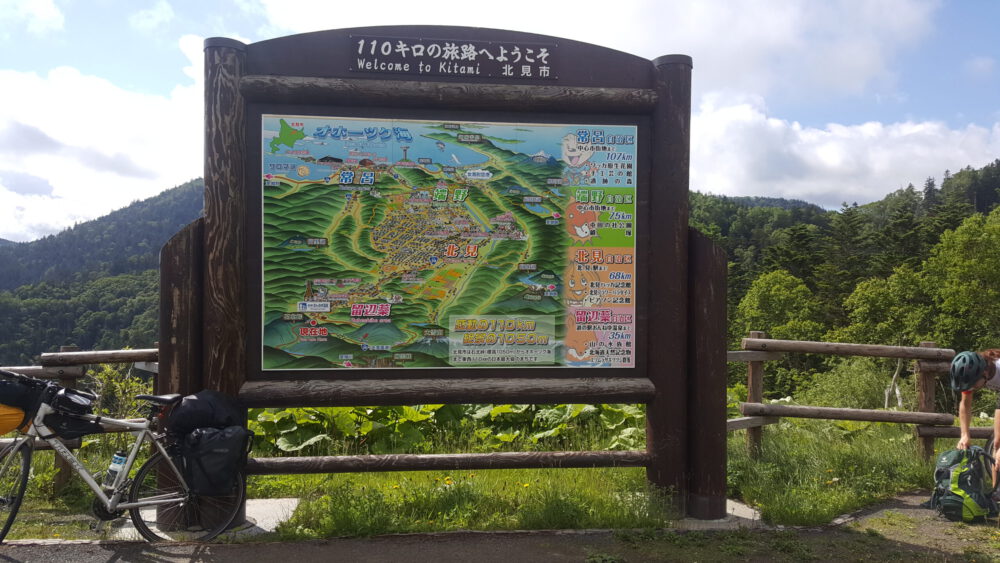 Map of Kitami area on the top of Sekihoku Pass- Welcome!

After a very comfortable night in Hotel Kumoi and the heavy rain in Sounkyo we started quite early in the morning. We knew we would have to climb a tough mountain already at the start of tour 6 into the direction of Lake Chimikeppu. But we made it up to 1050 m to the Sekihoku pass to see the sun and blue sky with a beautiful view over the Daisetsuzan National Park. Thus, we earned a little rest up there on a parking ground. Also, it was time for some snacks and kind of a second breakfast we took from the Seicomart in Sounkyo. Now we were officially in the Kitami region.

After a long downhill part we passed the Taisetzu Lake lieing beautifully quiet in front of us. So, it was time for a short photo stop and quick eating of cereal bars. Sadly the sun was already gone again and the sky got cloudy and grey.

In Kitami we got the option for some nice Takoyaki to give us energy for last part. It was really delicious and the funny octopus guy out there didn´t lie.

The end of the tour was again a tough part. Because three “tiny” mountains (if one believes the profile of the map) almost killed us due to weak legs and exhausted bodies. Additionally, it was very hard to drive on the gravel path. After more than 110 km we finally arrived at Lake Chimikeppu and the public campsite Chimikeppu Campground. This place really could be called Wild Hokkaido. In fact, the next town was around 25 km far away and there were only four other people beside us. Toilets and some water facility were present, but no showers.

After setting up our tent and tarp we checked the map on our smartphone for possibilities to get a shower. Finally, we decided to give it a try to ride around the lake and check out a hotel. We asked at the reception for an onsen or the possibility to shower but nobody seemed to understand. So we rode back to our tent base and had to go into the ice cold lake. Sweaty sleeping in the tent was no option 😉. Once in there, it was quite nice despite all the algea…

After the cold bath we prepared dinner (rice and fish from cans with nice japanese rice topping) and went to bed early. The next morning we were glad that we brought our breakfast with us as of course no convenience store was in sight.