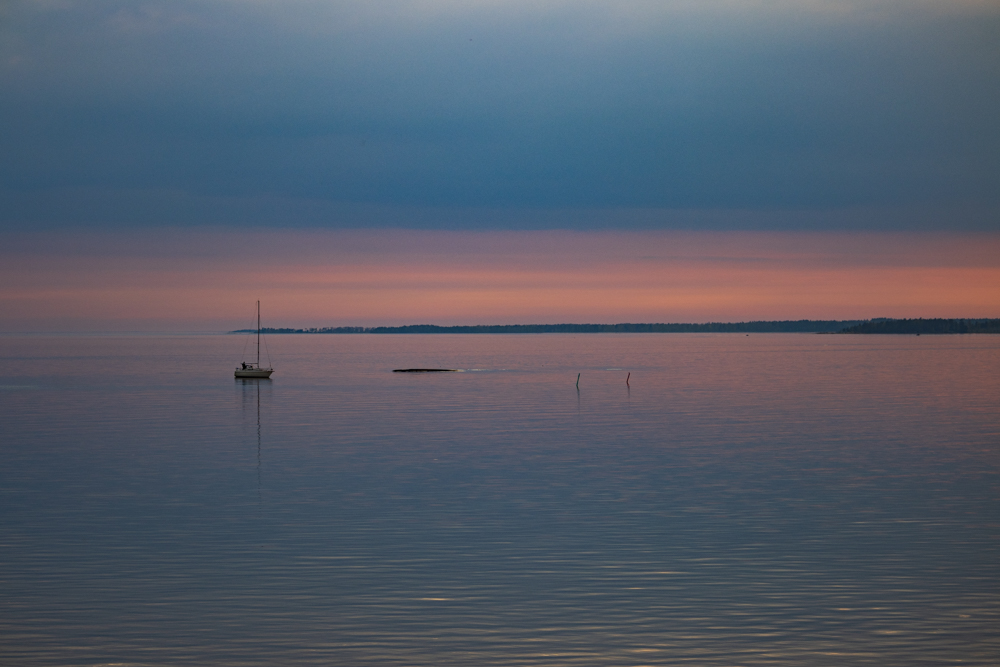 Sundown over lake Vänern seen from the campsite near Mariestad.

On our rest day in Lidköping it rained all day and mostly even heavy. So we had no motivation at all to explore the city. But our camping ground was well equipped so we took the chance to do our laundry. We spent most of the day in the public kitchen area and did some stuff on our notebooks. In the evening we went to the supermarket to get our dinner and some snacks for the trip on the next day. The plan was to follow again the Västgötaleden in the direction of the Kinnekulle nature reserve.

No rain – take the chance!

After a rainy night we woke up very early around 5. The sun was already rising and we did not hear any rain. So we took the chance to stand up and pack our bags. The tent was still very wet, so we detached the inner tent and laid it in the sun to dry. After breakfast not everything was completely dry, but we thought it was good enough to give it a try. When our bicycles were ready it was a bit cloudy, but without rain and with moderate temperatures it seemed quite good for cycling.

A confusing start from Lidköping

Near our camping ground was a sign of the Västgötaleden so we tried to follow it. But we already lost the track in the city of Lidköping. Anyway, we came across some nice buildings in the city which were worth a photo stop. Later we discovered a sign for a cycle path to Mariestad. This was also the goal of our stage. So we followed this path, but we misread a sign after Filsbäck and switched to main roads by mistake. However, after some kilometers we came to Källby and checked out the map for the Kinnekulle area. There was also a sign for an old grave and two impressive stones with drawings on it. The information sign about the Kinnekulle area contained also some bike paths. Based on this we decided to cycle to the harbor of Källby and were back on track.

After Källby we entered the Kinnekulle nature reserve. This was a really beautiful bicycle path. It led us through forest were a lot of birds and other animals lived. The path was mostly gravel or a forest path, so cycling was not very fast but a lot of fun. Our next rest we had within the Munkängarnas nature reserve, at the Kinnekulle quarry with impressive stone formations around. Definitly a nice photo stop! The path continued that way till Hällekis. A bit sad that we already just had a rest stop and did not take the time to visit some of the cafés in this nice small village. There were a lot of museums and small craft shops along the path. After this the street was asphalted and also some cars drove there, but most of the time we were alone on the street.

Shortly after the small village Årnäs we spotted a sign for an old castle ruin. It turned out that in this area a powerful and nice castle was built in the middle ages. But today you only can see the ruins. After a short visit, we continued our stage in this forest area, but a little later we came to a farm land area. Still the streets were very empty and it was nice to cycle. But the absence of a toilet for many kilometers let us rush the rest of the tour. The weather was really pleasant when we arrived at the camping ground. So we decided to stay for three nights instead of only two. Also the forecast was good for the next days and the area looked like an interesting spot.

With a lot of sunshine we set up our tent and to be safe, also the tarp. This time we wanted to prepare everything for spontaneous rain. After a shower we went into the city of Mariestad using the path through the beautiful nature reserve Ekudden close to the campsite. There we celebrated our first 1000 kilometers with delicious fish at a restaurant. Of course two Mariestad beers completed our meal. After this we walked back through the nature reserve to our camping ground and chilled at the beach of lake Vänern watching the nice sundown.