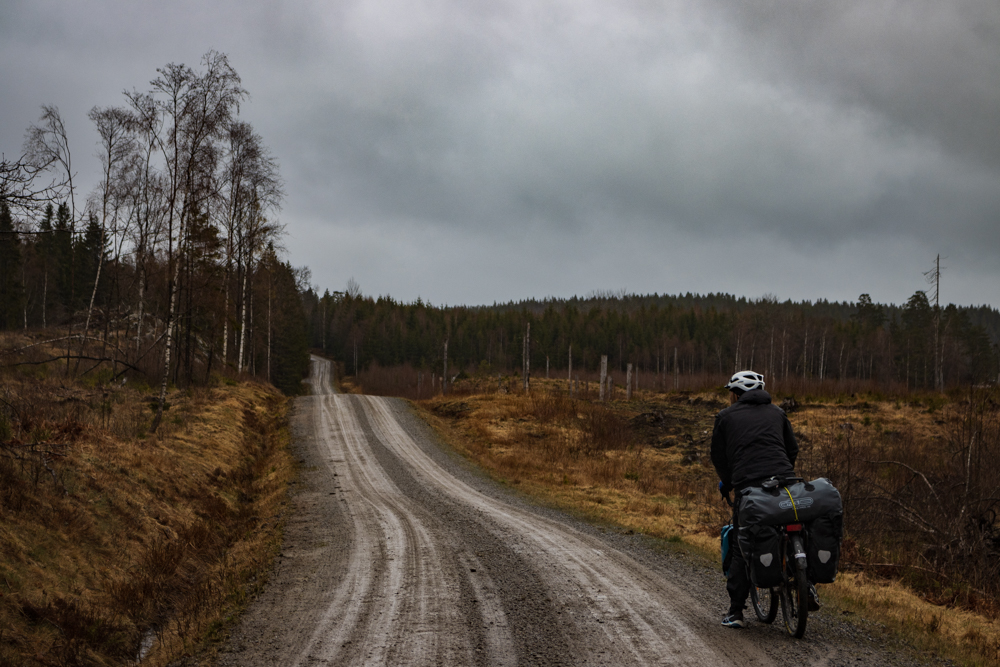 Up and down on muddy gravel through a surreal forest landscape.

After waking up in our warm and cosy apartment in Grebbestad we looked outside the window and saw exactly what the weather forecast had predicted – a cloudy sky with a bit of rain. The temperature was around 4 to 5° Celsius. But anyway, we wanted to continue our tour and hoped it would not get too bad. On a half-year trip you have to expect some of these days. So we got ready to start our bike stage (rain gear on!). Our goal for this day was a small town called Ed not far from the border to Norway. That spot is halfway to lake Vänern and we had read about a moose ranch being there. But we also had to keep in mind Alinas knee and see if the bike adjustment helped with that. And of course the weather was an unpredictable factor.

The first kilometers from Grebbestad we drove a bicycle path to Tanumshede. It led us along a forest and no cars were allowed on the track. This was really pleasant. Also there was not too much rain during this phase of the tour. In Tanumshede we had to change on the Länsväg 163. Shortly after we made our first stop, a world heritage was waiting for us. The Tanum world heritage in Fossum consists of rock carvings from the bronze age. We could stop next to the street and took a short walk around the rocks and marveled the carvings. Always interesting to imagine how people experienced the world 1000s of years ago and also see their legacy. Too bad that the weather was not so good, so we did not spent too much time there.

We followed the Länsväg for some more kilometers. It was very unpleasant that there was a lot of garbage next to the road for many kilometers. It was a mostly wooded area, so besides the trash it was actually very nice. But it seemed that people didn’t care about nature and environment. Before the tour we set some intermediate goals in the navigation system, so that we did not have to drive always on the main roads. So at some point we had to leave the Länsväg and switched to minor roads.

Welcome to no man’s land

For the first kilometers it was not too bad. There was not much traffic and streets were still asphalted. There were a lot of ups and downs and the rain got stronger, but we still could handle it. However, after a while we moved further away from the villages and entered a very remote area. There were just single houses or farms every few kilometers. But the worst thing was that the street got really bad. First it was a gravel road but after some more kilometers we drove through a forest where the road was mostly mud. The rain and wind made this to the most intense and toughest stage so far. We did not rest much so we would not cool out. There was not even time to do a lot of photo stops. We were really relieved when we came back to the main road and let the mud and dirt behind.

An unpleasant surprise just before Ed

As we followed the Länsväg further we came to a nice rest stop. The rain was quite heavy and we were glad about the small shelter. So we had a little protection from the weather and could book our accommodation. We called a camping ground near the moose ranch. And because it was so cold and we were so soaking wet we chose again a cabin. The rain was very strong and we just wanted to finish the tour, good for us that it was just about 8 km to go to Ed.

A nasty surprise was, when we wanted to hop on the bicycles we realized that Alex had a flat tire. So we started to change the tire on the parking lot when it rained a lot and it was very windy. Alex could not find the reason for the whole and also with all the dirt and weather it was quite difficult. So our nerves were strained, but after almost an hour we got it done and could finish our tour. We were so happy when we arrived at the camping ground in Ed and could enter our cabin very fast. After a warm shower and some delicious pasta we went to bed very tired.