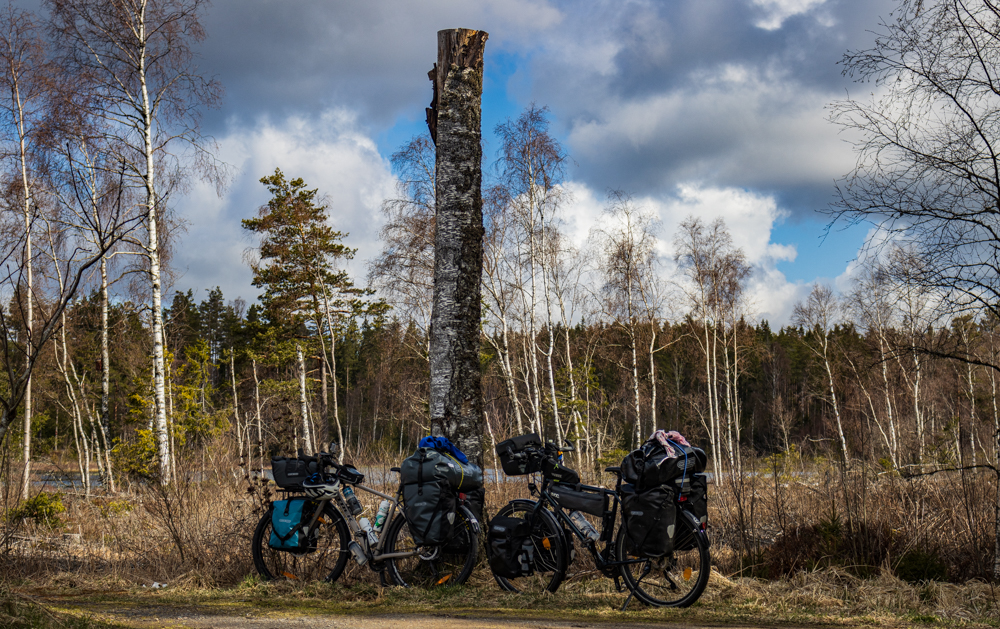 Bikes at the nature reserve Tingvallamossen.

After the tough last stage to the Dalsland district we decided to stay three nights in our cosy cabin in Ed. On our first day we took a walk around Lake Lilla Le. The centre of the city was on the opposite side of the lake. There we discovered a beautiful café, where we ate delicious cakes to celebrate Alex´s birthday. Afterwards we went to the supermarket to prepare us for the next days. In the evening we had dinner in our cabin and watched the sundown above the lake.

The day after we went to the Dalslands moose ranch. There we could feed the majestic animals and got a lot of information by the staff. Seven moose living at the ranch, some of them were raised by humans and so they are used to them. To drop some facts: a few 100.000s moose living in Sweden, the further north they live the higher and bigger they are. They can be more than two meters tall. Also impressive is that they can jump about fences which are more than 2 meters (!!).

After feeding time for the moose, it was feeding time for humans. So we had a nice fika with apple and blueberry cake in the sun. We also had a nice chat with a friendly Dutch couple from Utrecht, that also had booked the feeding event. After eating and talking we had a walk around the ranch, visited a lake there and finished the tour before a light thunder storm started.

On the way through Dalsland to lake Vänern

After a relaxing night we had to clean the cabin and got our bicycles ready. The goal for this stage was Mellerud at lake Vänern. One of the famous spots at Swedens biggest lake and also located in the district of Dalsland.

The Länsväg 166 leads exactly from Ed to Mellerud. However, we still used our navigation because it tries to avoid main roads whenever possible. After around 15 km we spotted a beautiful rest place with a lookout tower next to a lake. This lake was a part of the famous Tingvallamossen nature reserve, one of the biggest moors of Dalsland. So we took our chance and tried some birdwatching. Unfortunately, there were not many birds around.

When we continued our tour we came across Bäckefors. A sign in the village showed the direction to a little showplace (Bäckefors Bruk), so we tried to follow it. But in the end we could not find it. So we did the little detour for nothing and followed the road to Mellerud. Apparently, being the film location for the series Kopps is all that this lost place has to offer.

For most of the remaining time we followed the main road with a short intermezzo on a minor road. We also crossed the Dalsleden, a famous bicycle road in this area. But the sign did not say which direction leads to Mellerud and we could not figure it out. So we still followed the main road. From time to time we had some rain showers but it was not so bad as during stage 12. Our camping ground was a bit outside of Mellerud directly at lake Vänern. So we could cycle through a thick forest on a pleasant bicycle road for the last kilometers.

This stage was short and we finished really early. We booked our cabin and got ready to go the city. Obviously, we got the oldest cabin available. One could say it had a rustic charme – or maybe it was just shabby… And way to expensive for not even having WC and shower in it. But at least it was warm 🔥 and a good option for the next rainy day.

In Mellerud we then had a nice lunch at the Sibylla fast food restaurant (great vegan burger again) and bought some supplies and other stuff for the next days (finally a hair dryer!). In the evening we had a walk along lake Vänern and enjoyed some beers in the sun. The location of the campsite is really quiet and perfect to explore the nature at the lake. We hardly saw anyone, only some sea gulls and ducks 🦆☀️.