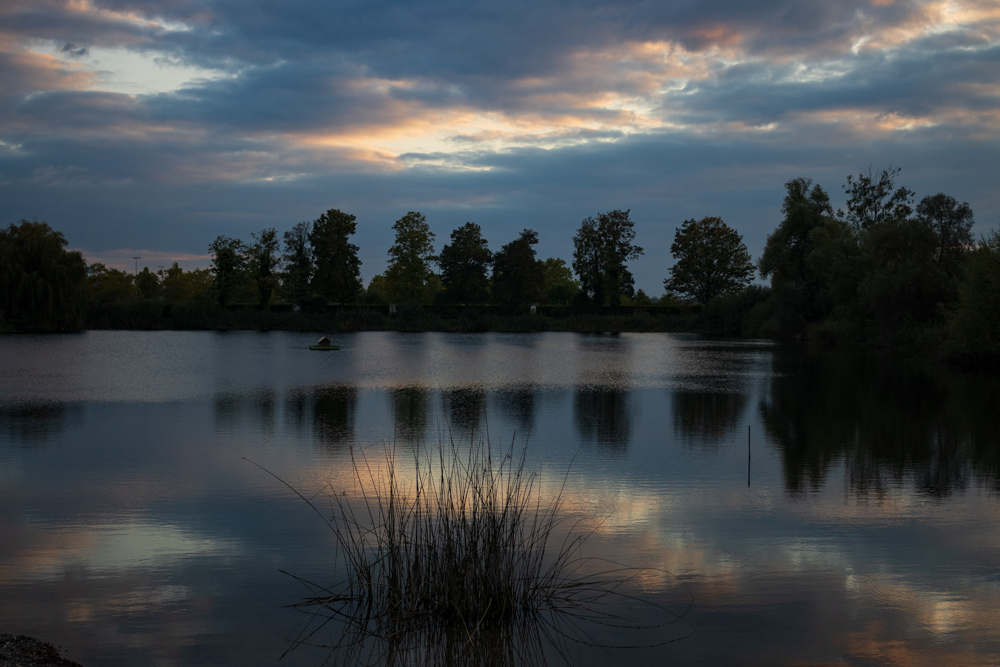 Small cute lake next to our apartment.

It was a cloudy morning when we woke up in our hotel room in Basel. So after breakfast we brought our bags down via the elevator and prepared the bicycles in the underground car park. When we started the stage it was a bit cold and the top of the few skyscrapers in Basel were covered in clouds. In Basel there was also a good bicycle infrastructure and so we passed the city center quite easy. After crossing the river Rhine we cycled just a few hundred meters more to get to the German border.

The border crossing was also quite unspectacular and only a small sign which was covered by trees next to the road showed us that we were back in Germany. The easiest way to tell that we were back home were the street signs. The first German city we crossed was Weil am Rhein. Our plan was to follow the river Rhine north wise. So we chose the bike path Eurovelo 15 which was the local bicycle path called “D-Route 8 Rheinradweg”.

When we left the city of Weil am Rhein on a major road a sign showed us the way to an unpaved was along the river Rhine. Of course it was time for a short break and taking some pictures. It was easy cycling and after we left the more industrial area at the German-Swiss border we came to a more remote area with a lot of nature. We saw a many birds enjoying the day in the river. Also along our path we found a lot of signs which explained projects about improving the nature of the river area.

The weather got better and the sun started to shine. For some kilometers we had to leave the river Rhine and came to the town “Neunburg am Rhein”. It was lunch time so we cycled to a supermarket and got us some food which we ate on the parking lot. We also checked our options for the night and decided to take two nights in an apartment in Schwanau which was around 80 kilometers far from our location. This was quite a lot of kilometers but also it was before noon and following the river Rhine means almost no climbing so we were positive to arrive there not too late.

After a few more kilometers the Eurovelo 15 led us back on the shores of the river Rhine. The temperature was quite nice only the head wind during cycling forced us to wear and windbreaker. A lot of other people enjoyed the day with cycling along the river. Even we cycled most of the time on an unpaved way it was nice and relaxing. For many kilometers we followed the river till we came to the town “Breisach am Rhein”. By chance we discovered an ice cream parlor and treated us to a large sundae.

Freshly strengthened we continued our stage along the river Rhine. For the next kilometers we often had to cycle on a dyke next to the river. Even it was still sunny the wind started to blow strong. Our bad luck was that the wind came from the front and we had a bit of a struggle to keep the pace high. When it was possible we switched to the road below the dyke where cycling was easier. Anyhow we made good progress and could also enjoy the beautiful nature which was the river surrounded by.

Again near the town Weisweil the route took a turn and went away from the river. From then on we used our navigation to cycle to our apartment. We crossed several small villages till we came to Rust and passed the famous theme park “Europapark”. But we didn’t take a ride in a roller coaster, but just took some picture. It was a really long stage and it was getting late, so we got tired. After some kilometers through a forest we finally came to our destination. After check-in we had to go to the supermarket before closing time. Afterwards we had dinner in our apartment and watched some shows before bed time.