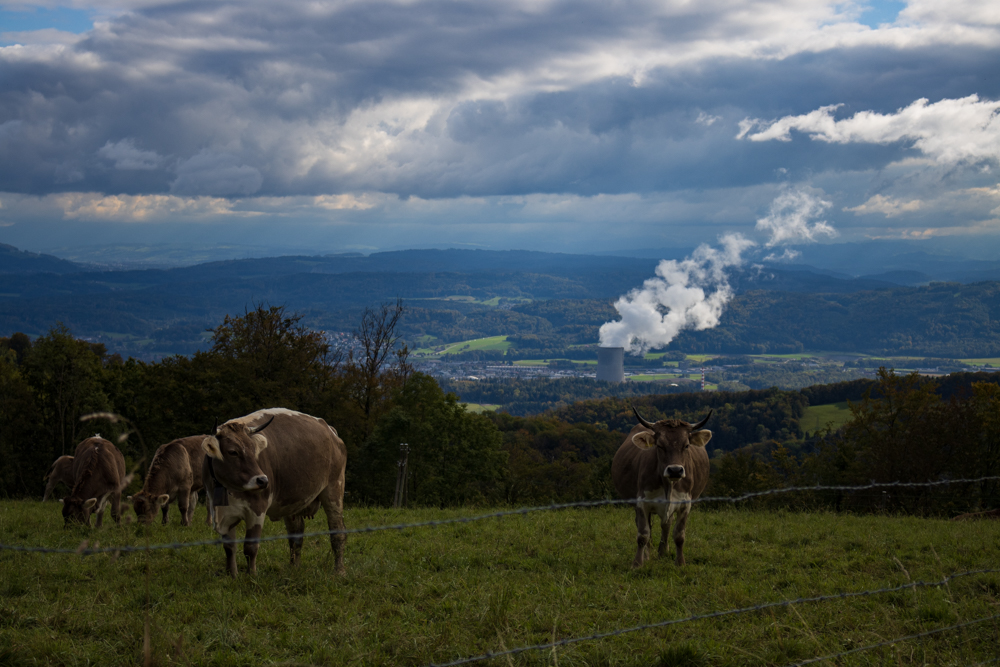 Reward view - cows in front of the wide area.

After just one night in our very big apartment we had to say goodbye to the beautiful city of Luzern. So like usually we had breakfast in the apartment, brought our bags downstaris, and got the bicycles ready. The weather was not that nice and it was very cloudy but at least it didn’t rain. When we left the city we followed the river Reuss for some kilometers. In addition we had to say goodbye to the beautiful Alps but because of the deep hanging clouds we were denied one last look. The plan was to get to Basel and maybe already leave Switzerland and cross the border to Germany.

The almost boring site of Switzerland

After Luzern we passed a few towns and in Rothenburg we made a short snack stop including taking some pictures. After this town we entered an area which consists mainly of farmland and there was not that much to see. But cycle paths like always in Switzerland were in prefect conditions. We passed the Sempachersee and after the town Sursee we followed for many kilometers an unpaved way. This was quite unusual for the “Nord-Süd Route” because almost every cycle path was asphalted. But cycling was also good there and it was a nice change.

After passing several villages we came to Aarau the biggest city in this area. Also it was time for some lunch at we made a stop at a Pizzeria. We were a little confused by the way Pizza could be ordered there but finally got a very delicious half meter of Pizza 🤩. Shortly after continuing our stage we left Aarau and passed a sign which informed us about a climbing segment which would start there. We knew that might be our last big mountain which we need to climb on our entire tour through Europe.

The final mountain in Switzerland and in general – Schafmatt

The first segment led us into a forest on an unpaved way. After just a few hundred meters we needed to stop because we still wore our winter clothes and through the tough climbing we begun to sweat heavily. With some lighter clothes we made it to Stüsslingen were we could turn onto an asphalted main street. When we left the village behind the real climbing started. There were really steep ramps which were more challenging than the most we had to climb on our tour.

After some zigzags and an almost brutal steep passage close to the end we made it to the top of the Schafmatt. The reward was a stunning view above a very hilly area. Of course we needed some time to recover there. What followed was a quite fast downhill segment through a lot of forests. After this we cycled through quite some towns which could be described as the suburbs of Basel.

We did one last break at a bench in a forest and checked our options for the night. As mentioned before our original plan was to pass the German border but we found and inexpensive hotel in Basel, so we booked that. The last kilometers were quite easy and also in Basel there were very good bicycle infrastructures. Check-in was easy and there was a place in the garage for our bicycles. But we were so tired that we didn’t want to take a walk around in the city so we just relaxed in our tiny room.