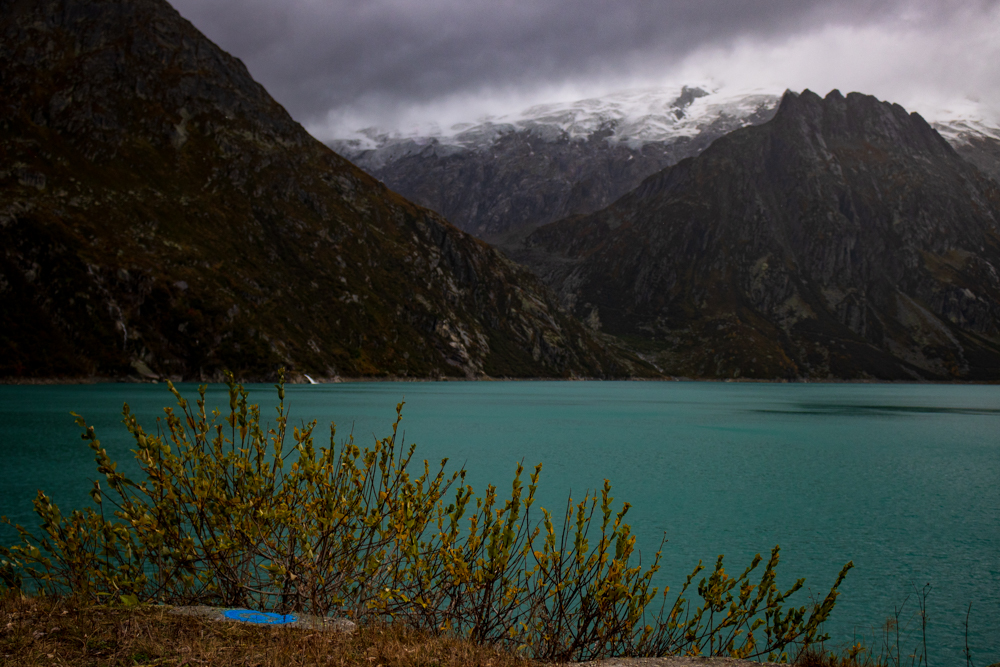 Crazy colour of the Göscheneralpsee.

After we climbed the highest point of our tour, we thought it was time for relaxing and of course to enjoy the Alps. Therefore, we stayed four nights in a very cute and comfortable apartment in Göschenen. Unfortunately the weather forecast was not so good. Just on our first day it shouldn’t rain that much, so we decided to go hiking on that day. We packed our small backpacks and started the hike. Our goal was the Göscheneralp.

From the start we couldn’t really see our goal because there were so many deep clouds hanging on the mountains. Just sometimes for some moments we could see the glacier on the horizon. A small hiking trail led us higher and higher, and we passed forest, meadows and walked along small rivers. The nature was just beautiful even when the weather was not. When we arrived at the top a reservoir (Göscheneralpsee) was waiting for us and together with the mountains and the glacier it was just a beautiful panorama. However, also a quite surreal scenery with heavy storm that almost blew us from the dam.

Before we went back down to Göschenen we spent some time in a local shop and ate some local specialties. The owner of the shop told us a lot about life in high mountains which was pretty interesting. On the second day we had mostly heavy rain but we used the short break in the afternoon to take a walk around the village. We followed the official path of the “Dorfrundgang” which also explained a bit of the history and the events around building the first Gotthard tunnel for the railway which was quite interesting.

On the last day we had heavy rain all day long. So we stayed in our apartment, watched some shows and did stuff at our notebooks. On the next day, when we started the stage, there was just little to no rain. So we thought this is good for us when we got our bicycles ready. But after just a few meters we recognized how cold it would be during the downhill part. So we stopped at the Teufelsstein just a few meters behind Göschenen and put on more warm clothes.

Downhill through the Alps

From Göschenen on around 1100 meter our first goal of the day was the Vierwaldstättersee which was on around 430 meters. This meant we had a lot of downhill ahead of us. So the enemy for the first hour was the coldness. Also the weather was not that good most of the time but we could enjoy spectacular views on the Alps. Some of the high mountains were already covered with a bit of snow which looked like powdered sugar.

In Flüelen we arrived at the lake. We followed the coastline for some kilometers. There were some ups and downs but climbing wasn’t too tough. Also we cycled through some tunnels but everywhere we had bicycles lanes which was quite convenient. When we came to Sisikon we had to decide if we want to follow the main road (which was quite dangerous according to a sign) or if we want to take a boat ride. We took the boat which meant some waiting time in the cold but afterwards we had a quite relaxing one hour cruise about the Vierwaldstättersee to Beckenried.

A boat ride and a cold arriving

When we left the boat we had beautiful sunshine and cycled along the coast of the lake. After some kilometers our path led us more inland and we passed the city Stand just to return to the shore of the lake. But the clouds were hanging deep and it started to rain. It was quite heavy rain but we made our way further along the shore of the lake. In Ennethorw we took a short break at a bus stop to change some of our wet clothes.

We still followed the shore of the lake and passed some small towns. When we came to Luzern the rain stopped and we could see the sun for some moments. We were quite hungry when we came to the main station so we took the chance for a fast late lunch at McDonalds (vegetarian burger). We were a bit frozen and checked our opportunities for the night. We found an inexpensive apartment just a few meters away from us, so we booked it. By chance we also could take a Covid test next to our apartment which we would need to cross the border to Germany. In the evening we enjoyed our huge apartment and prepared us for the next stage.