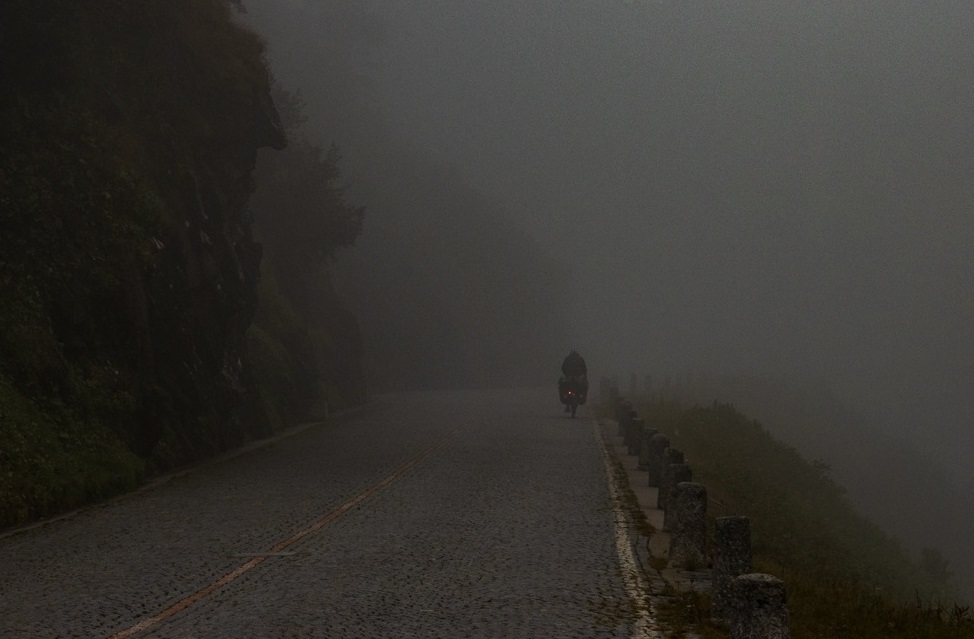 On our rest day in Airolo it was again time for cleaning and checking the bicycles, because on the next day the Gotthardpass was waiting. So after breakfast we both cleaned our chains and cassette. Some gears of Alexs bicycle didn’t work smoothly but we hoped that they would last the rest of the tour. In the afternoon the weather got a bit worse, so we just took a small walk around the town. With this cloudy weather we couldn´t see the Gotthard pass anymore.

Our apartment was equipped with a Carrom board, so we gave it a try. The game ended (after one hour that felt like an eternity) with a draw because none of us was able to make proper shots and we gave up. It seemed to be that this game needs a lot of practice. Afterwards we made dinner and watched some shows.

The clouds of the Gotthard

On the day of the stage we stood up a bit later. The weather forecast was not so good as it should rain. And it already did when we had breakfast in our kitchen. But on this day the stage should be one of the shortest, however, still one of the toughest. It was just 30 km to our goal Göschenen but we would pass the highest point of the entire sabbatical tour. Therefore, we had to climb the Gotthard pass and here are some facts: we had to climb 900 m in 12km, 2106 meter high, the last part of the road is called Tremola, which consists of 24 hairpin bends on cobblestone. So we had quite a lot of respect for this road.

However, it was time to start the stage. It was very cloudy and we couldn’t see the top, but the rain stopped which was good. The first kilometers were on asphalted street. We recognized with every few meters we cycled that we got higher and higher. It was tough work but the steepness of the road was moderate most of the time. After some curves we already were quite some meters above Airolo and had nice views into the cloudy valley.

The hairpin bends of the Tremola up to the Gotthard pass

After some more climbing we came to the Motto Bartola which is located at a plateau-like area. For some meters this was the only segment with no climbing. There we could see that the clouds where just a few meters above us hanging on the mountain. And we knew that would be our way. However, it was a mystical atmosphere and we had wonderful views there and took some photos. When we continued the stage we finally turned onto the famous Tremola. The first few hundred meters where asphalted so cycling was still okay.

It didn’t take long and we were within the clouds. The visual range got smaller and smaller and it was time to turn on our lights and put on the windbreaker. Also the cobblestone part started and then one hairpin bend after another followed. Cycling was tough but still okay. The biggest problem was the coldness (for Alex). However, also problematic were the dense clouds. Sometimes we could see just three to five meters. Also some cars and motorbikes were taking this route but they have taken us into consideration.

Looking back to this part of our tour we were not sure if it maybe was also a gift to cycle within these conditions. Not to see what would come after the next three meters was quite good for the mental constitution. Just pedal and pedal and you will see what comes next. Could also be kind of a lesson learned from this cycling trip to be transferred into real life.

After we had taken all 24 hairpin bends of the Tremola suddenly it cleared up and we could see a bit further. We saw the top of the mountain range but of course the valley was covered by the clouds. A few meters more and we arrived at the top of the Gotthard pass. We quickly changed our sweaty clothes and prepared us of the downhill passage. Of course, it was also time for some photos.

When we cycled down the first few kilometers we again couldn’t see far because of the dense clouds. But after a while they disappeared and we had a beautiful view into a valley. We followed the main road for some kilometers with really high speed till we came on a hill where we had a nice view on Hospental, Andermatt and the surroundings. Also it was time for a break. We followed our route and passed Andermatt. During our last downhill part we came to the Teufelsbrücke. Suddenly we had beautiful weather and could enjoy the rest of the stage with breathtaking views on the Alps.

We arrived quite early in Göschenen but the friendly host gave us the key to our bungalow and also some instruction. We needed to hurry up a bit because it was Saturday and the small supermarket would close at 4 o’clock. So after getting us some food we celebrated the climbing of the Gotthard pass with pizza, beer and watching some shows.