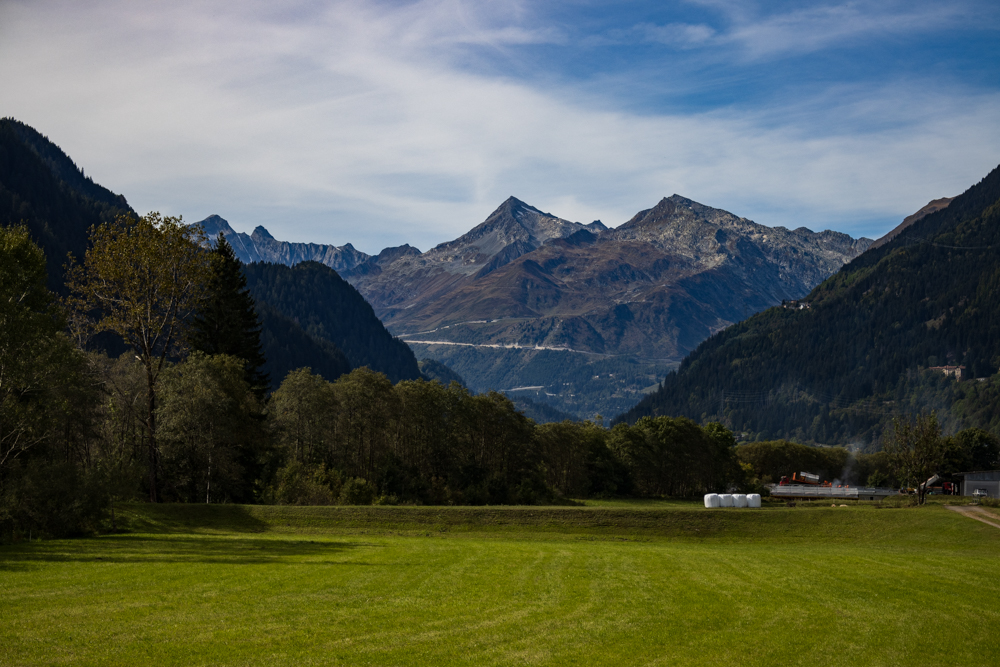 The mighty Gotthardpass is in sight.

In Bellinzona we stayed for one day. We were still tired from the previous stages and we knew that the next two stages would be pretty hard. Thus, we just relaxed in our fancy tent for most of the day. In addition, Alina had some pain in her left foot so we also had to take care for it. Bellinzona is located in a valley surrounded by a mountain range on two sides. So we had beautiful views and it is actually a nice place, but we also heard the constant noise of cars from the nearby highway. In the evening we went to the supermarket and had some nice dinner in our Mongolian tent.

Leaving Bellinzona and Enjoying cycling in the valley

The next morning we stood up when it was still dark and had breakfast in our tent. It was a bit cold but there was a heater in the tent so we did not freeze. Afterwards we got everything ready and had to say goodbye to our comfortable tent. Today’s goal was the town Airolo which is right before the Gotthardpass. We wanted to stay there for another two nights before we will climb the Gotthardpass. But to get there we also would have to do a lot of climbing today.

The first few kilometers were relaxing. We followed the flat path through the valley and could enjoy the views. Most of the time we cycled on minor streets with little to no traffic. After we left Bellinzona the area got more remote. We passed some small villages always following the little river Ticino. It was just a beautiful area where you could find these Swiss stereotypes everywhere. For example, cows with their bells, small water streams falling from steep mountains, old churches, and of course massive and imposing mountain ranges.

Little detours and the joy of climbing

After some more kilometers we came to a road construction where our path was blocked. But everything was well organized and we could take a diversion route which brought us back to our path (well done Switzerland 👍). However, there were many signs for the Nord-Süd Route (Percorso Nord-Sud) but on some crossings we could not see any sign, so it was good that we also had the gpx track on our navigation. When we left Giornico behind we finally reached the area were the climbing started.

In the beginning the climbing was moderate and there were just a few steep ramps but it wasn’t too exhausting. But of course we needed to take a break here and there. Another good thing about Switzerland is that there are a lot of wells with free fresh water supply, so we did not need to worry about water at all. We fought our way up mostly on a major street in a forest area. The climbing was often interrupted by some flat areas where cycling was more relaxed. But when we came across a nice place in the town Faido we stopped for lunch at a bench.

After our lunch the toughest part of our climbing started. There were some pretty steep ramps we had to take. Also we passed some tunnels which saved us from more climbing. Just a few other cyclists (most of them with E-bikes) could be seen here but a lot of hikers were enjoying the day. Finally, we came closer to Airolo and already could see the mighty Gotthardpass with its winding road along the mountain. But this street had to wait, so we cycled to our apartment in Airolo.

This was pretty big (but also expensive like everything in Switzerland) and provided us all we needed. After going to the supermarket we took a little walk onto a nearby mountain to enjoy the view over the city and watch the sundown. Of course, it was time for taking pictures. Afterwards we had some delicious dinner in the apartment, watched some shows, and played some games (also provided by the host). Even we climbed a lot during that stage, it wasn’t as exhausting as we thought, but the Gotthardpass is still waiting for us.