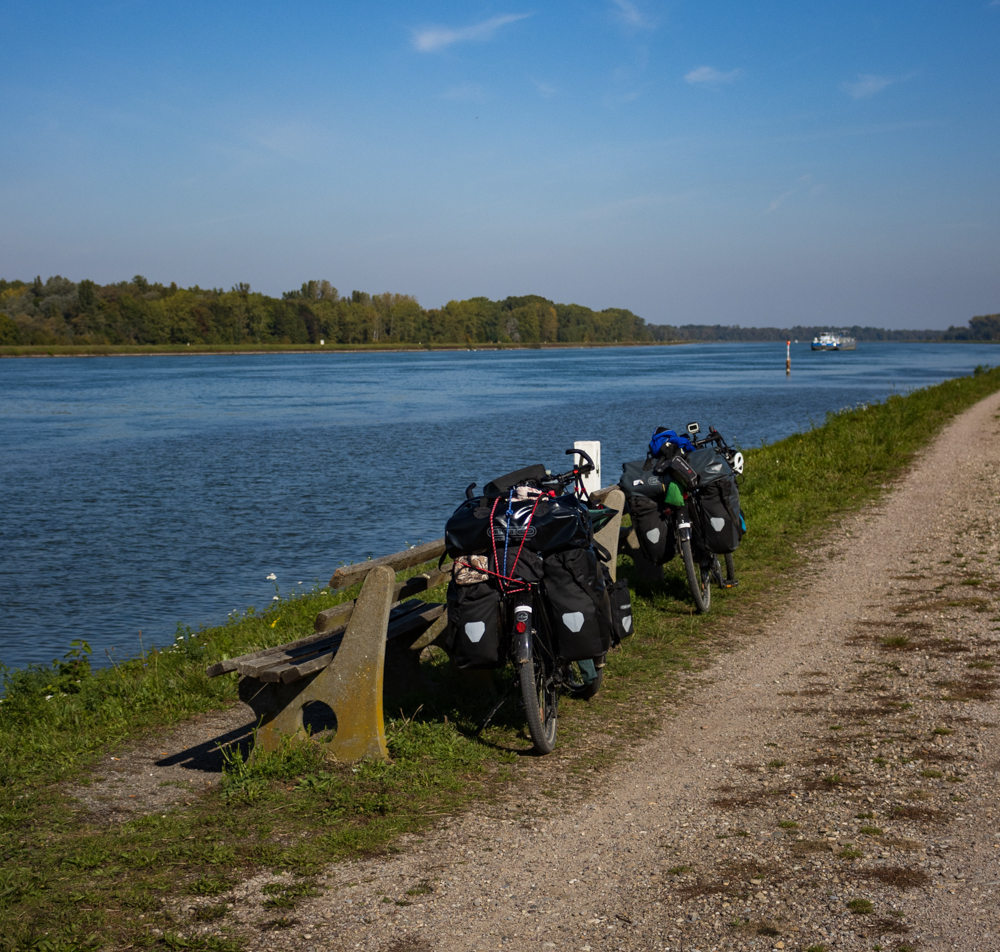 Have a snack stop with a beautiful river view.

After three long stages in a row, we decided that we needed one final rest day in Schwanau/Allmannsweier. We were pretty exhausted when we woke up and started slowly with breakfast. After making laundry we did some stuff at our notebooks. In the afternoon we took a little walk to the nearby lake. It was a very small lake but the area was pretty nice and we could enjoy this autumn afternoon with some sunshine. After a lot of photos and some beer we went back and had a nice dinner. After some gaming we went to bed.

A little shock in the morning

After we woke up, we looked outside the window and saw that the whole area was covered in mist. Everything was wet outside, good for us that we could have breakfast in our cozy apartment. Afterwards we packed our bags and got the bicycles ready. When we were almost ready, Alex hit his head on the iron stairway. After that he didn’t feel so well so we waited for another hour that he could recover a bit. Alex still didn’t feel well but he wanted to start the stage and we wanted to see how far we could get.

Our plan was still to follow the Eurovelo 15 north wise. But our apartment was a bit off track and by chance we came to a sign which showed us the way to the city Kehl. This city was located next to the river Rhine and we knew that the Eurovelo 15 will pass this city, so we followed the sign. We cycled on roads and bicycle paths in good condition. It was very cold so after some kilometers we had to put on our trousers. After a while the mist got less and after we passed some smaller villages we came to Kehl.

The last covid test and back to EuroVelo 15

The regulation in Germany was that we needed a Covid Test for hotels and restaurant. We knew that we could perform a test in the city so we stopped next to the city Hall where a Covid test center was. It was the last day when these tests were free, so good for us that we would arrive at home on the next day. Also performing the test was quite fast. Meanwhile the sun was shining and it was getting more warm so we could turn off some clothes.

After we left Kehl we came back to the Eurovelo 15 which led us to the river Rhine. For almost the next 50 kilometers we cycled along the shore of the river. The area around the Rhine is nice and cycling is pretty easy so we made good progress but for the next hours there was not much variety. Nevertheless, we enjoyed our lunch in the sun on a bench next to the river. In the afternoon the weather was really nice and a lot of people enjoyed the day at the shores of the Rhine. For some moments it was almost hard to cycle because it was so crowded.

On the shores of the river Rhine – further on EuroVelo 15 – or not?

On the last kilometers next to the river we had strong headwinds and it was a bit of a struggle. But then our path led us into a forest where we were protect from the wind. When we found a nice stop for another break we checked the options for the night. We took a nice apartment in Knielingen close to Karlsruhe which was another 30 kilometers away. So we continued our stage and after some kilometers we left the forest and our path should us led back to the river Rhine.

When we already saw the dyke next to the Rhine a man waved at us and we stopped. He told us that there were constructions going on at the dyke and that it was not suitable for biking. We had a little talk and he told us that he also did a lot of traveling by bike and foot (with his cute dog). It was very interesting, but somewhen we had to say Goodbye and took his advice and cycled back to the main road. From this point on we used our navigation which led us through some smaller towns till we came to Karlsruhe. From there it was just a few kilometers till we arrived at our apartment. It was pretty late, so after dinner we did some stuff at our notebooks and went to bed.