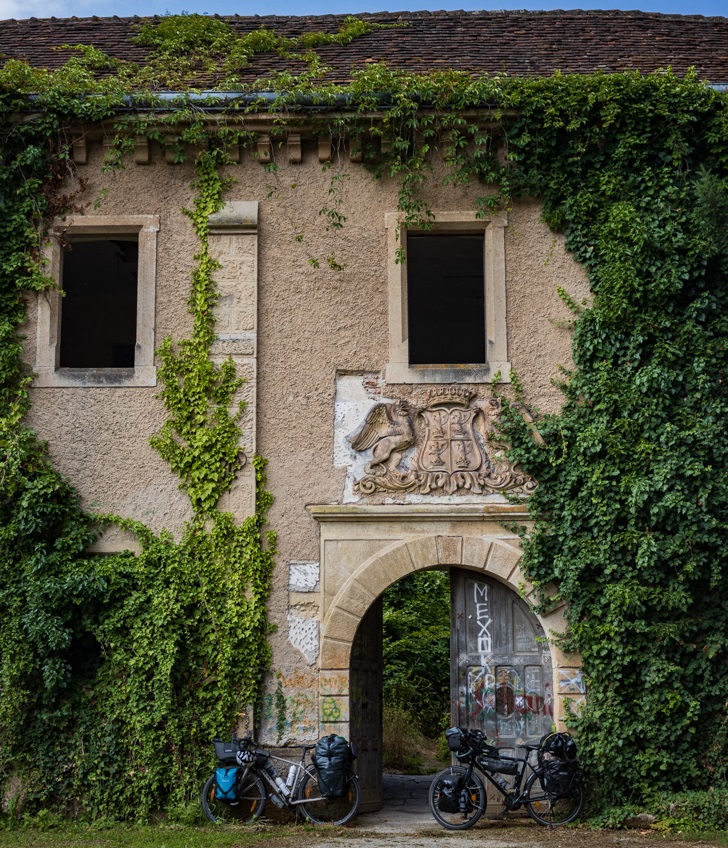 We didn’t sleep that well the night before the stage, so we started the day a little later. Today’s goal was the capital of Croatia – Zagreb. To get there we followed a bicycle route called “nationalna ruta 2“. The last five kilometers on the previous stage we already followed this route and from that we knew there are no signs and we had to use navigation and the GPX data. But before we left Vinica we had breakfast in our beautiful apartment, said goodbye to our host and got the bicycles ready.

Visit to a special park – One out of three in Croatia

Our first stop was after only two kilometers. We came to the Arboretum Opeka which is a park with different and exotic trees. Also in the park located where the ruins of the Opeka Manor which was a great motive for a picture. After the visitwe followed the main road which was partly under construction. So cycling there was not easy but after some time we could turn on minor streets. It took not long and we had again an incident on Alex’s bike. This time the lower bottle holder broke but it was not that big problem because in one of the bags was enough space for the bottle.

Shortly after that we had our first climbing passages. But we cycled on a good asphalted road within a forest so it was not that tough. When we passed the peak we left the forest and had a wonderful view over the Ivanščica mountain range. Our path led us to the city Ivanec right at the foot of the mountains. Then we cycled along the mountain range and still had beautiful views. It was hard to find a good place for a rest so it was again time for a bus stop break.

After the effort comes the fun

Some kilometers later we passed the mountain range on a relative low point with around 400m altitude. The streets were in good condition but still the steep parts were tough. A quarry was also along the road so many big trucks were also driving on that road which was also sometimes scary when they pass you close. But when we were on the top we had a stunning view over the valley and we really enjoyed the downhill segment which followed.

After a while we came across a small playground with bench and table. So we took the chance and had lunch out of our bag. We followed our route again and it was easy cycling. Most of the time the areas were flat and we passed some smaller towns. But the sun was shining stronger and stronger so we made the next stop at a sports ground in the town Luka and sat on a bench under a tree. Not that many kilometers later we had to climb the last steep ramp of the day. We were out of breath when we reached the top.

But after this we could cycle on brand new bicycle roads. The construction was going on before the ramp but afterwards the construction had been completed. And it was really good not to cycle on the main road because the traffic increased. But after we crossed the city Zaprešić the bicycle path ended and we were back on the main road. We were very close to Zagreb and due to road constructions our navigation lost track. Also we could not find the address of our apartment with our navigation system, so we had to use a phone for navigation for the last kilometers int to the capital of Croatia.

Our apartment was central in Zagreb. And cycling into the city was not fun (more like in an action movie). We came from a direction were no cycle path existed and a lot of traffic was going on. First we used something looking like a walkway. But suddenly this path got more narrow and we had no other option than going down the huge curb and getting into the intense traffic…When we entered the city center we could cycle on minor streets which wasn’t that bad, but when we came back to major streets without bicycle lane our stress level increased. However, somehow we survived and arrived at the apartment. After a shower we ordered us some food and relaxed for the rest of the evening.