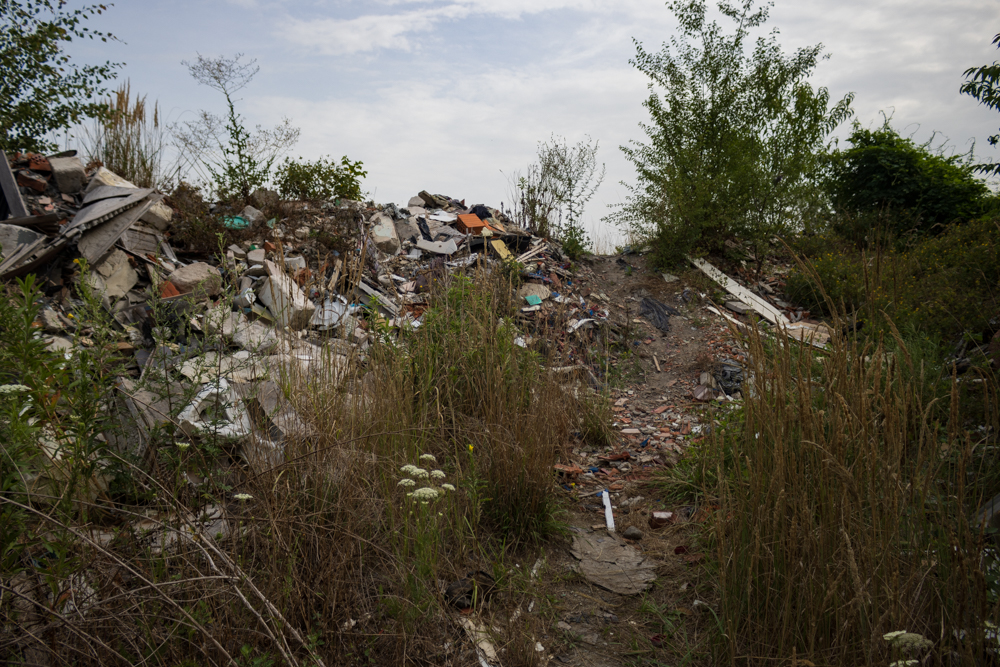 The mountain of trash - not possible to push the bike over it alone.

In Zagreb we planned to have two rest days. So on our first day it was time for some bicycle care. So we cleaned chain, cassette, gears and breaks. Alex got a new bottle holder and replaced the rear brake pads. Alina replaced the chain at her bike and all brake pads. We were in a private apartment and the family who owns it had a little barbecue. So they had a look at what we were doing and also supported us with some beer. Cleaning costed a lot of time, so the only other thing we did was that we went to a supermarket to get some supplies later.

On the second day it was time for the city of Zagreb. Our apartment was within the city, but still we had to walk around 4 km to get into the old city. This isn’t too bad but it was a very hot day. However, we thought walking around will gave us some impressions. Zagreb has a lot to offer but we wanted to do a short tour and not rushing from one sight to another. So we went to the “Museum of Illusions” where we were amazed about some visual illusion and also could try to solve some puzzles.

Afterwards we walked on into the city center and had a delicious vegetarian/vegan lunch at a restaurant. By chance we came across the cathedral of Zagreb and “Monument of the Assumption of the Blessed Virgin Mary” which is a fountain in front of the cathedral. At last we walked through the Grič-Tunnel which was a blessing because it was so cold in there. After some beers at a chilly bar we went back to our apartment.

Before we started our stage we had breakfast in our apartment. We finished breakfast quite early and got our bicycles ready. After saying goodbye to our host we followed our navigation through Zagreb to the river Sava. Our plan was to follow the “Sava Ruta” which is a planned route along the river Sava but not established yet. So cycling through the city was okay, because most of the time we had a bicycle lane. When we came to the river we could follow the shore on a gravel road.

The attack of the insect and the search for medical help

We cycled just a few kilometers when Alina was stung by an insect above her right eye and immediately had pain in her head. At first there was not much to see at her eye, but still we decided to cycle to the next pharmacy. Meanwhile Alina’s eye got swollen and the staff told us that a doctor should have a look. They told us there was a children hospital around the corner and we should try it there. The children hospital told us they couldn’t do anything and gave us the address of another hospital. But also there we had no luck so our journey for another hospital went on. We used our phones to navigate to another hospital and finally someone could help. Alina was given an anti-allergic drug as an injection. But still in pain and with a swollen eye we didn’t want to continue the stage.

So we found an apartment around the corner for another night. Next to the apartment was a café so we could wait there till the room was ready. It didn’t take long and we could relax at the apartment. Alex bought a cooling pack for Alina’s eye and some food for the day and we spent the rest of the day in the apartment watching anime and playing some games. In the evening and after a lot of cooling the swelling went down. So we decided to continue our stage on the next day.

Again we were ready quite early and after breakfast at the apartment we packed the bicycles and could start the stage. Also this time we cycled to the river Sava and followed it in south east direction. After some kilometers at the shore of the river we left Zagreb. We cycled on gravel street along a dike. There was not that much to see besides some trash, a lot of trees and some goats. After a while the track on our navigation showed us to turn into a small path which was almost overgrown. We got the track from an official website so we trusted it.

A path to forget

For the next few hundred meters the path was paved with rubbish. All kinds of trash was thrown at this small path. The biggest problem was that there was a lot of broken glass. Even without the garbage, the path was hardly passable by bike. At some point we had to push the bikes over a “mountain of rubbish” – not possible to do it alone… Not far after this we came to the next town and needed a break. We were a bit disaffected by the cycle path. So after this we didn’t want to follow the official route anymore and used our navigation.

So we continued cycling on a minor road. It wasn’t that much traffic going on but the heat was increasing. After a few more kilometers we came to a crossing where we should turn left, but the road was closed. So we turned into our only other option. After we passed some smaller villages we came back to the river Sava. The streets along the river were quite good again and from time to time we had a nice view on the river.

Early stop in Sisak at the river Sava

When we came to a bus stop we made a rest. We checked our options and decided to stay in Sisak. Alina had still a bit of pain so we didn’t want to overdo. We booked an apartment there and continued our stage. When we had to cross the river we could watch a lot of goose and storks hunting in the river. Also the rest of the stage was not so bad but still we were disappointed from the trash part of the tour. We arrived Sisak quite early but our room was already ready. So we went to the nearby supermarket for some supplies and did some stuff at the notebooks afterwards.

In the evening with a bit less heat in the air we went down to the old bridge and the city center. We had beautiful views over the Sava with the sundown and also the vivid town was quite nice. However, along the river was again a lot of trash, right next to the city, just sad. Also sad was to see how many buildings were affected by the earthquake near Zagreb in 2020.