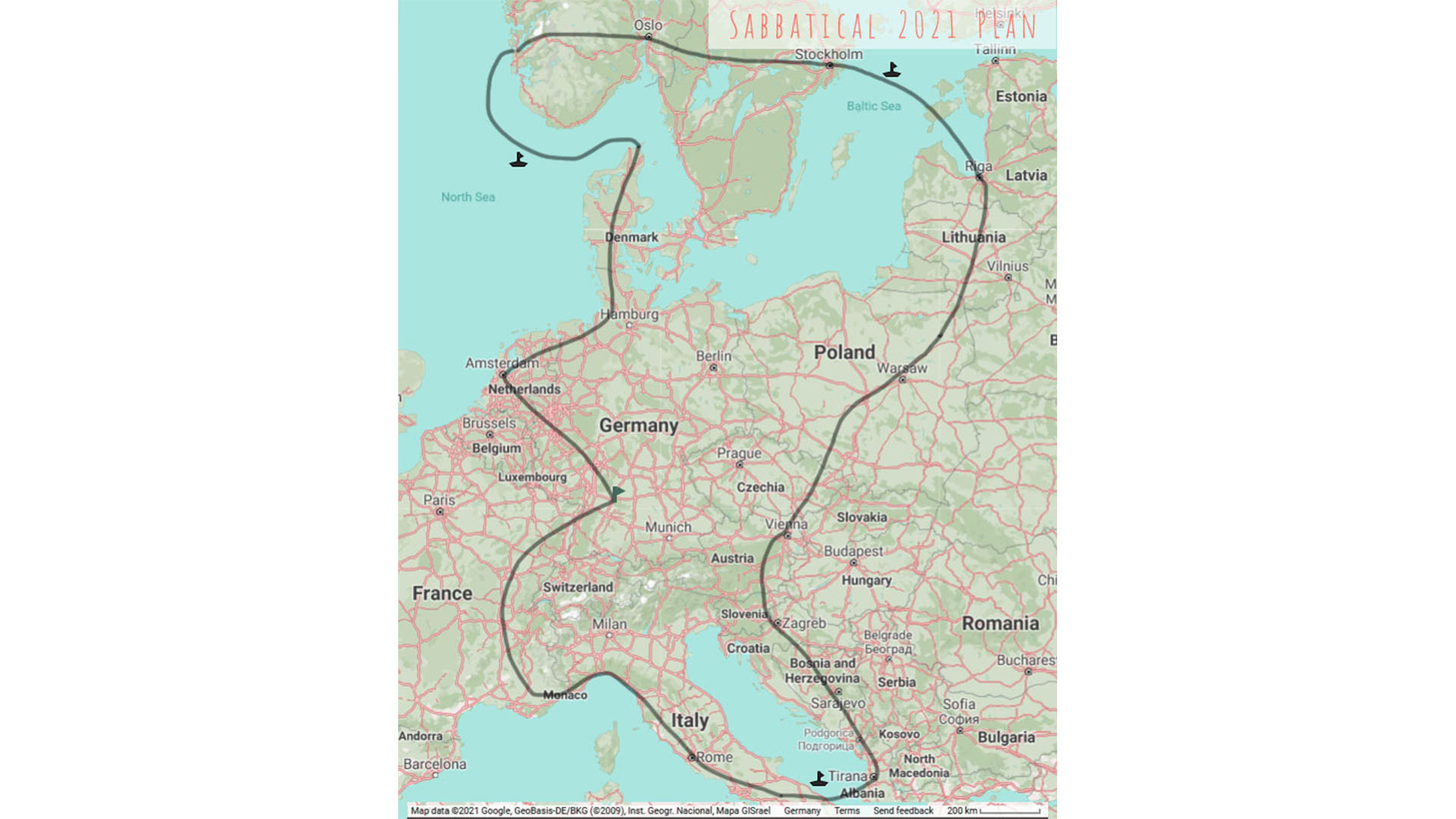 The rough plan for our Sabbatical 2021: Cycling through Europe.

Did you ever feel like rushing through your vacation as you have “only” 2 to 3 weeks of free time? We found ourselfs several times at this point and searched for an option to have more time and really do slow travelling. The idea of a sabbatical is coming more and more into companies. So, two years ago we heard from some colleagues from Alex that they will travel for one year. The idea was born – in a time before Covid-19, for sure…

Even if the sabbatical idea is more popular in these days, it was not so easy to find a solution for both of us. In the end Alex got a sabbatical contract and Alina had to quit her job to start into this adventure. As time frame we chose April to October/November 2021.

Where to go? Bicycle sabbatical in Europe!

How nice would it be to start directly in front of our flat? So we decided to take Europe as a big playground for our sabbatical bike adventure. Thus, each of us did some research and presented it in powerpoint 😂 to the other one. Afterwards we compiled the outcome in one rough track around our beautiful continent. This led to a route including France, Italy, some of the Balcans, Austria, Czech Republic, Poland, Lithuania, Lattvia, Sweden, Norway, Denmark, and the Netherlands (see below). A lot of ferry connections would be necessary, especially for crossing the nordic countries. We estimated the route with 6500 to 7000 km. With 6 to 7 months sabbatical time this would make at least 10 days with 100 km cycling per month and should leave enough space to explore the surroundings and also have some rest days.

Be flexible and change the plan

So far with the theory, but as often in life things do not work out as planned. Thus, in March 2021 the Corona situation got worse again with the third wave knocking on the door of many european countries and we had to take a decision. Wait for better times to start as planned in the direction of France and Italy or find another solution? Read more about our hasty start into the adventure in our prologue post.

Preparations to be done

Already right after the decision we did some research about good travel bikes that would allow for enough luggage space. They also should handle some rough tracks and be more robust then the standard trekking bikes we always rented on our trips (e.g. in Japan). As we only have mountainbikes at home, which are perfect for cycling in the Odenwald, but not comfortable for long distances, something new was needed! So, Alex got a gravel bike from Trek via Jobbike and his company. Alina decided for a Patria Kosmos travel bike, only being sold in selected bike shops.

The big back panniers from Ortlieb were already in our equipment. So we just needed to add some more bags for the front together with different frame bags and bottle holders. For the setup of our bikes and bags you can read more here.

Also the rest of our equipment was partly present but needed some upgrades we always thought about while traveling, e.g. a more insulating mat would have been nice in New Zealand. A still growing list of items we carry with us on this adventure can be found here.

This article contains unpaid advertisment because of branding and links.