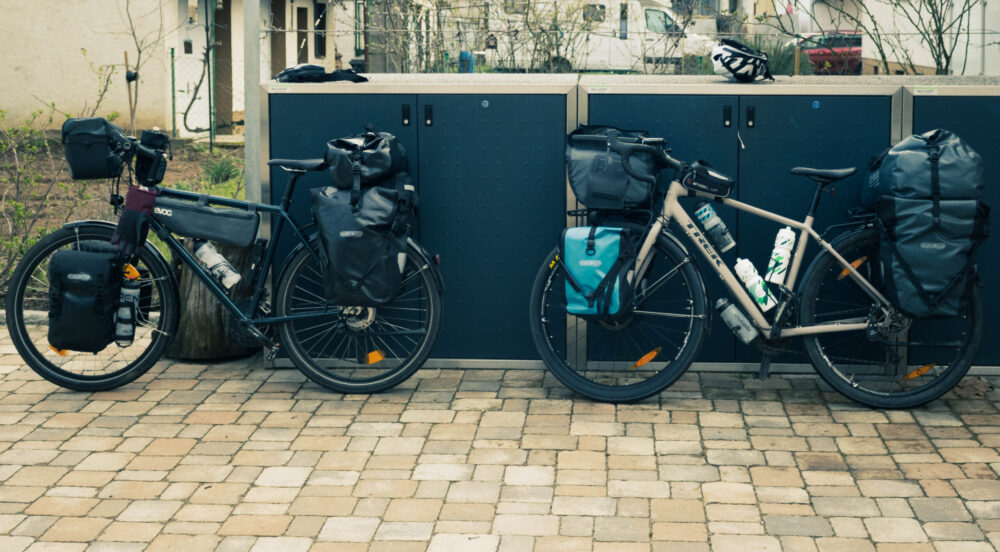 Our two bikes for the Sabbatical tour 2021.

On former trips in other countries such as Japan or New Zealand we always depended on the bike setup possible to rent on-site. Thus, it was mostly a compromise and not in all points what each of us would have preferred as an optimal setup. So for our big adventure we decided the bikes should be the best and suitable ones we could get for each of us.

Alex got the chance to get a bike within a jobbike program from his company. He ordered a gravle bike from Trek online and it turned out to be really impressive. It comes with two pannier racks, one in the front and one in the back part. It has 29″ tires and a lot of options to fix bottle cages or a lock holder etc.

He added splashguards and changed the off-road tread tyres towards more road suitable ones. The handle bar has a lot of space for the Garmin device to mount and also to hold the GoPro camera.

Having two large Ortlieb bags in the back and two smaller ones in the front plus a bag to put on top of the front rack a lot of things find place on the gravel bike. An additional large rackpack from Ortlieb to be mounted over the back pannier rack turned out to be the optimal place for the tent and the tarp.

Alina went more with a traditional trekking bike setup. The Patria Kosmos also known as the bike for “real hardship cases” has a normal handle bar. It comes with options to mount panniers in the front and back part. There are not as much options to mount bottles etc. along the frame as for the Trek bike. However, the frame design allowed for a nice frame bag. The bike has a dynamo which can also be coupled to a power bank. Thus, device loading during the ride is no longer a problem.

The tires were already perfect for trekking/mostly road cycling, so no further adjustements had to be done. As bags again two small ones from Ortlieb were mounted in the front, and two large ones in the back. Also here a large rackpack is fixed over the panniers (this one contains “the kitchen”). Due to the lack of options to have bottle cages along the frame a small bottle holder is present at the handlebar. This can also store snacks 😉. Furthermore, Ortlieb has a mini bag and a bottle holder to attach to the standard bags. One of each is present at the small bags here.

This article contains unpaid advertisment because of branding and links.