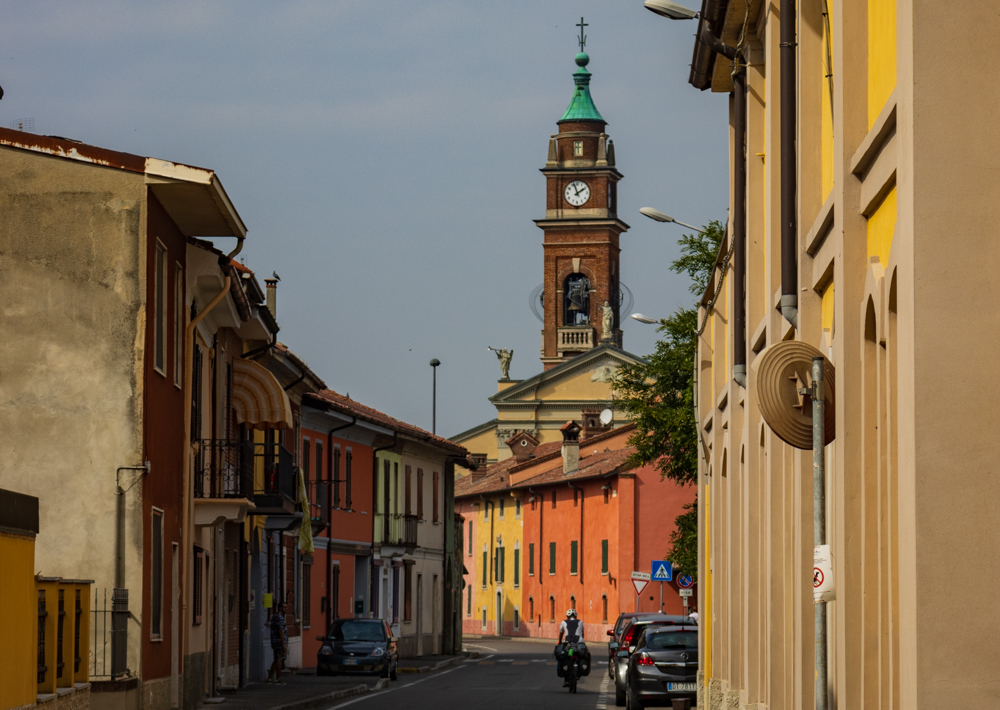 After three stages in a row it was time for a rest day after arriving now in the Po valley. Because the last stage was really tough we slept very long and started with a late breakfast in our room. After making some laundry we took a walk to a nature reserve next to the river Taro. It should be the home of many birds but we just saw a few and way more butterflies in many colours. Maybe it was bad timing for birder. We took a little walk close to the river and explored the riverbed because at this time of the year there was not much water. When we went back to our accommodation we also explored the (small) old town of Noceto and took some photos of the nicest buildings.

Goodbye to the Appennini – crossing the Po valley

After dinner in our room we went to bed. Our plan for the next stage was to cycle in the direction of the city Como. We had to pass the Po Valley from south to north which meant more than 200 kilometers of very flat cycling. So after breakfast in the apartment we got the bicycles ready. Meanwhile, a 93-year old italian lady from the neighborhood wished us a “good journey” from her window, waving kisses at us, and looking a bit amazed by our bicycles. With a smile on our faces we started the stage.

The first 30 kilometers we cycled on minor roads. It was a Saturday morning and a lot of other cyclists seem to enjoy this mild morning on the streets. So these conditions were good and we made quick progress. We cycled along the Appennini and had one final view at the mountain range. In this area were mostly just small villages and we made our first stop at “Museo Mare Antico e Biodiversità”.

The monotony of the Po Valley

Not far after this we turned onto a major road. It was a straight street without any curves for miles and a lot of traffic was going on but it was still good for cycling. In the Po Valley you could not see far due to the smog and haziness. There is also not that much to see besides a lot of towns which almost look the same and farmland. Then we crossed Piacenza and shortly after that the Po river. Also this was quite unspectacular and a bit disappointing.

The next kilometers we passed town after town. Sometimes we had some bicycle paths but sometime we had to turn on normal streets. But the streets were in good conditions and we still made great progress. From time to time we made a break here and there. When we came to the next bigger city Lodi we thought it was time for a lunch break. But it was already after three o’ clock and most of the restaurants had closed. So we took our chance at a supermarket and bought some Sushi for lunch. With no park nearby we sat down at the bus stop on the opposite side of the supermarket. Nice spot 🤪. Also we booked a Motel for the night.

Finishing late due to a flat tire

After some kilometers on a major road again we could turn onto a bicycle path next to it. We didn’t see that often while cycling in Italy but here near Milano there were many bicycles paths. Again we passed one town after the other till we realized that Alex had a flat back tire. So we stopped and fixed that. Also the problem could be found very quick. There was a little sharp metal piece which coused the issue.

Because of this repairing it was already getting late. It was around 18 and there would be not much daylight left. So we still cycled at a very high speed and made great progress. The last kilometers we crossed a very urban area on a major street with much traffic. But it was not too bad and we arrived at our Motel in Agrate Brianza near Milano right before sundown. After a shower we had dinner and watched some German football. Afterwards we did some stuff at our notebooks and went to bed.