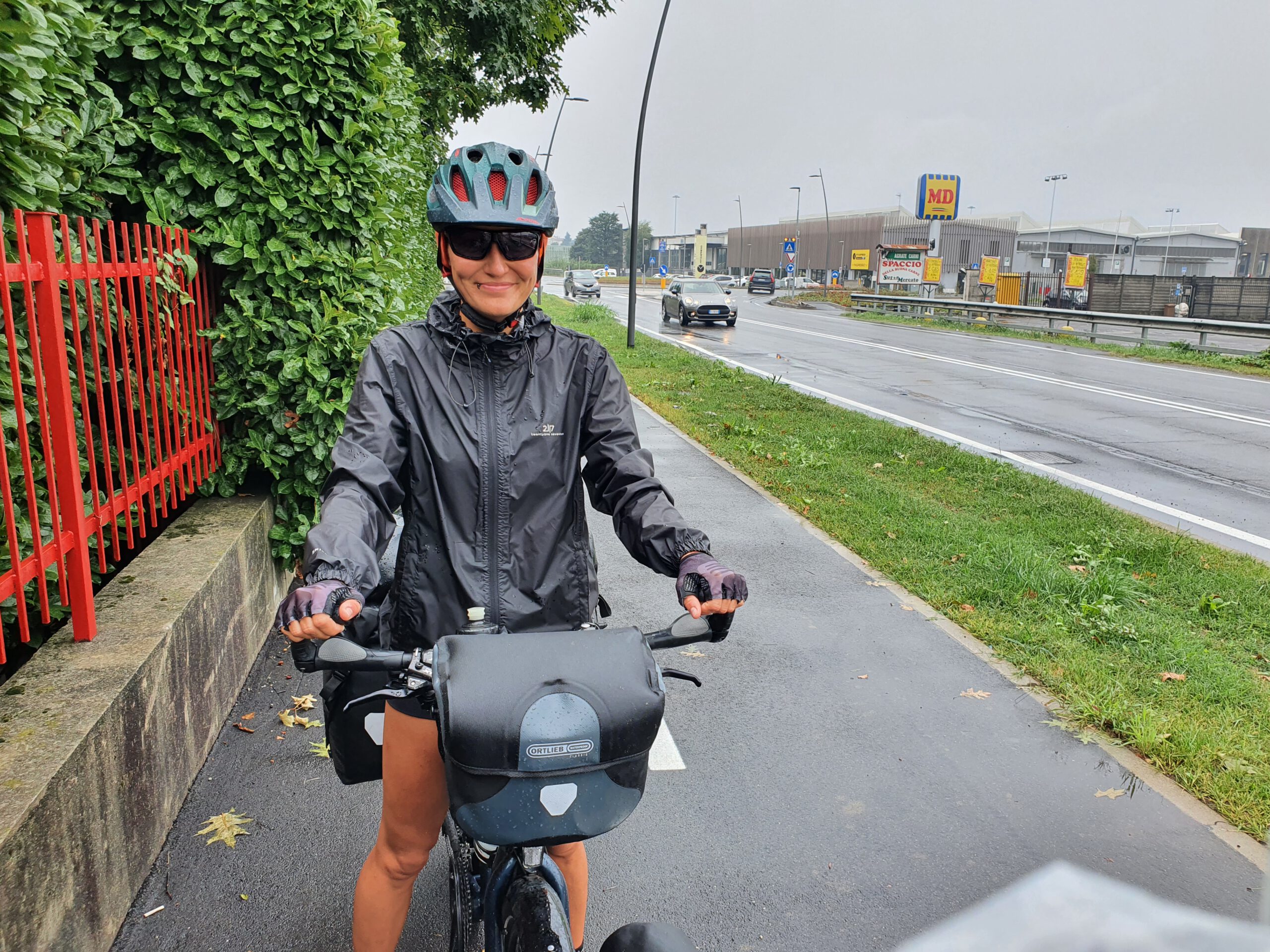 Rainy days are coming back!

Due to the long stage on the day before we chose to start a bit later. The Motel we stayed at provided an Italian style breakfast which consisted of a coffee and a croissant. Como was not that far so we thought that this would be enough. After breakfast we got the bicycles ready and during this we heard some thunder. So we waited for a moment when suddenly heavy rain started. So we postponed our start further. When it was close to the check-out time around 11 we thought it would be time to start the stage even when it was still raining.

Heavy rain for the start

The first kilometers of the stage it was raining cats and dogs. We had to cycle on major roads with some traffic. Everywhere on the streets were gigantic puddles and water was coming from all sides. After seconds we were wet and we had tons of water in our shoes. Good that at least our bags were waterproof. If it was possible we turned onto bicycle paths to avoid traffic. But after sometime the rain stopped and cycling was more fun again.

We were still in the metropolitan region of Milano where one town came after the other. Mostly we cycled on main roads and because the rain stopped we also made better progress. The further we got north the less urban was the area. Also we had to climb a bit. The bad weather and the mist prevented us from looking far. But we recognized not only now but also in the last stages how landscape and architecture changed from Tuscany to north Italy.

Arriving at our last Italian stop before the next rain – Como

After some more kilometers we could see the first mountains of the Alps. Big clouds were hanging on their top and mist lifted from the forest at the mountains. We were coming close to Como and also the end of the Italian chapter of our tour. Once again we had to climb some ramps before we cycled along the mountains of the Alps to Como. Our way led us down into the city not quite far from the famous lake.

When we arrived at our apartment we had to wait some minutes for the host who explained us everything (for sure in italian 🤪). Afterwards we wanted to take a shower and make laundry. To our surprise we were standing in the dark just minutes later. After a short chat and activating the red warning blinking fuse (ehhh just normal here?) our washing machine restarted. Also the rain started again, so we stayed in the apartment and ordered delicious food. In the evening we went to the supermarket and got us some supplies.