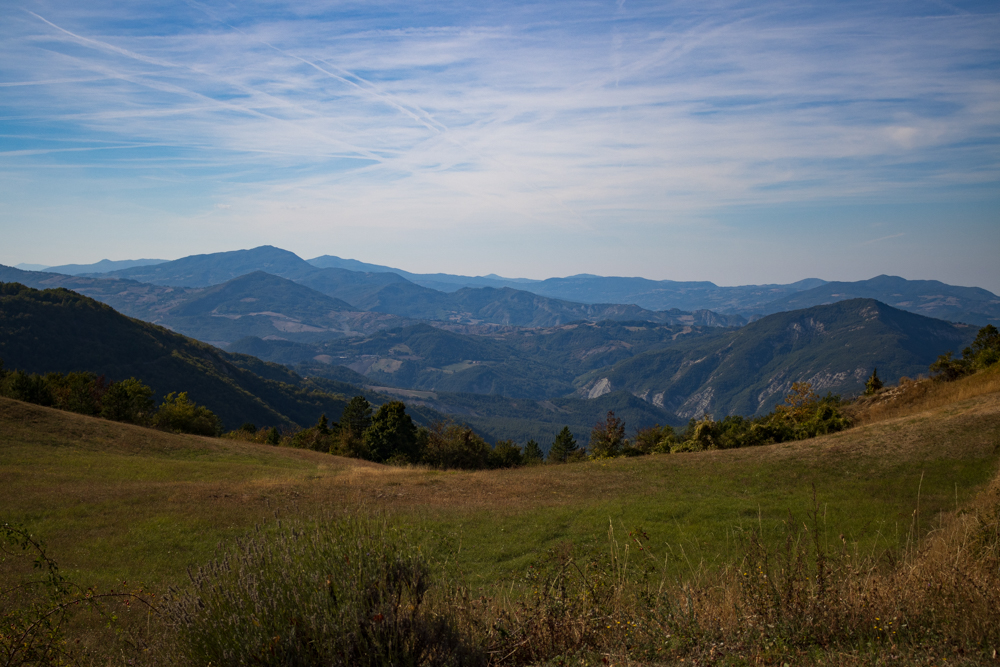 Last views on the mountains.

After a relaxing night we had breakfast in our big kitchen and packed everything together afterwards. We were at the fifth floor but good for us that there was an elevator to bring down our bags. We prepared the bicycles and could start our stage a bit later as planned. The goal of the day was to overcome the Apennine mountains and cycle into the Po Valley. So we knew this would be a tough day starting directly with climbing.

Climbing in a remote area in the Apennine mountains

On our way out of the town Pontremoli we cycled on a major street in a wooden area. And immediately after the town border the climbing started, but it wasn’t too tough. Just a view kilometers later we left the main road and cycled on a lonely road with almost no traffic. The road was not in best condition but okay for cycling. Our way followed the river Magra along the mountains in a dense forest. During our first stop Alina was attacked by nasty flying insects so we continued the stage fast without longer stops.

After a bit more climbing we could enjoy short downhill passages, but not for too long. When we started climbing again we came along some forest glades where we had stunning views on the mountain range. The area was pretty remote and we passed just two small villages but also the highway was not far and we could often hear the cars and trucks. When we came closer to the top we had to cycle some winding roads which was pretty tough.

All the cycling to the top cost us several hours and of course we made a lot of breaks for snacks, photos and just enjoying the views. Although it was really though, the steepness was never brutal and we really liked the area. Almost at the top we had to turn back onto the major road. But also on this street was not much traffic going on. Then we arrived at the top of the “Passo Della Cisa” with 1042 meters altitude. Of course it was photo stop time and we found a nice place for lunch and to enjoy the view.

When we continued our stage a downhill passage followed where we had to wear our windbreaker for the firsttime since months. But this passage didn’t take too long because we were on a plateau which we had to cross before we would come to the Po Valley. On our way to cross the plateau we had to cycle two more hills but these weren’t too tough. Of course, we made countless stops for photos because it was a pretty stunning area.

Beautiful views and quick descent from the Apennine moutains

Before the last hill we stopped to check our options for the night, when from the opposite direction another bikepacker came along. Yves was from Belgium and on his way to Roma following the via Francigena. He gave us some needful information about passing the Alps in Switzerland which we wanted to do some days later. With a friendly Goodbye both parties continue their goals. When we passed the last peak of the plateau we made another break and enjoyed the last beautiful views on the Apennine mountains and the Po valley.

Afterwards a long and steep downhill segment followed. It was interrupted by some road construction where we had to wait in front of a traffic light. But what we climbed in hours we cycled down in minutes and finally arrived at the Po valley. We followed a major street to our goal. There was a lot of traffic going on and the area was more urban then the area we had passed before. Finally, we arrived at our Bed & Breakfast. We were pretty exhausted so we took a shower, went to the supermarket, and had a nice dinner at the apartment before we went to bed.